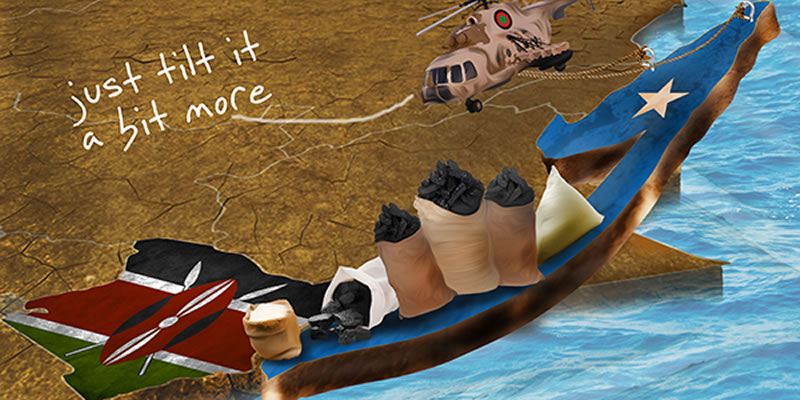 Ten years after Kenya’s military foray into Somalia began, what have been the significant achievements of the intervention?
April 8, 2022
By Abdullahi Abdille Shahow
Last October marked 10 years since the start of Kenya’s military incursion into Somalia. After a decade of military involvement in Somalia, and given that this is an election year in Kenya, it is the right time to assess whether the military intervention has achieved its goals.
Kenya’s military foray into Somalia has had mixed outcomes—some successes have been recorded but there have been setbacks too. The original intention was to push out al-Shabaab from those regions in southern Somalia adjacent to the Kenya border and to create a security buffer zone after Kenya blamed the militant group for kidnappings and cross-border raids.
What are some of the significant achievements of the intervention over the last decade? One major achievement of Kenya’s Defence Forces (KDF)—which were rehatted as peacekeepers under the African Union Mission in Somalia (AMISOM) a few months after they crossed over—is that they have contributed to Somalia’s stabilization and its state building project, expanding the territory under the control of the government of Somalia. Kenyan troops have also helped liberate towns and cities in southern Somalia, pushing out al-Shabaab from the city of Kismayo—its bastion and major revenue base—which now serves as the headquarters of Jubaland, one of the five semi-autonomous federal member states.
However, success within Kenya’s sector and area of responsibility under AMISOM (Sector 2) has been limited. Today, the Juba Valley serves as al-Shabaab headquarters. The group controls Buale, Saakow and Jilib, all major towns in the Middle Juba region of Somalia. The latter, Jilib, serves as the de facto al-Shabaab headquarters. The Kenyan military and its allies in the Jubaland government control only islands of a few towns that are disconnected from each other, and besieged and isolated by al-Shabaab. The militants control the hinterland and major access roads, and it is difficult for both civilians and government officials to move between liberated towns. For instance, Dobley, Afmadow and Kismayo are not accessible by road and Jubaland government officials intending to move between these towns have to fly to their destination.

Kenyan troops have also helped liberate towns and cities in southern Somalia, pushing out al-Shabaab from the city of Kismayo

Moreover, following the initial success in capturing towns, advances have stalled. KDF and AMISOM have not conducted major offensive operations since at least July 2015, and Somalia’s troops and Jubaland forces, on the other hand, remain incapable of taking the fight to al-Shabaab without significant assistance from the African Union peacekeepers.
Also, the initial purpose of the intervention, which was to prevent al-Shabaab incursions into Kenya, has not been achieved. Every year, Kenya experiences dozens of attacks along its northeastern border and in Lamu County. The attacks target both security forces and civilians, claiming dozens of fatalities. Al-Shabaab’s kinetic military action, and the hundreds of retaliatory attacks inside Kenya that the group has carried out since 2011, are aimed at turning Kenyans against Kenya’s military presence inside Somalia.
Kenya went in without fully understanding the potential impact of its intervention on local political dynamics—especially in Jubaland—and it now finds itself caught up in Somalia’s complex clan woes.
From the outset, Kenya went in without Mogadishu’s approval; the then Somali Transitional Federal Government (TFG) under President Sheikh Sharif Sheikh Ahmed objected to the intervention, saying that it had not been consulted.
The relationship between the two countries has not been cordial, especially under the current Somalia leadership of President Mohamed Abdullahi Farmajo. This is mostly attributed to differences over Kenya’s military involvement in Jubaland, its support for Jubaland regional leader Ahmed Madobe and the long-running maritime dispute between the two countries on which the International Court of Justice ruled in October 2021. Relations between the two countries have deteriorated to the extent that they have twice cut diplomatic ties.
The Gedo crisis of 2020/21 is a testament to Kenya being caught up in Jubaland’s internal clan politics. When Jubaland forces and federal government troops clashed in the Gedo town of Bula Hawo, Kenya allegedly supported and gave refuge to dissident Abdirashid Janan, providing him with a base in Mandera, inside Kenyan territory, from which to recruit militias to carry out attacks on Mogadishu-backed troops stationed in Bula Hawo.
Certain clans in Jubaland have turned hostile to Kenya’s intervention. The hostility faced by Kenya in Gedo, for instance, is linked to competition for political power inside Jubaland and competition for resources, especially control of the lucrative port in Kismayo. The port is the region’s economic mainstay and when Kenya liberated the city of Kismayo in 2012 it completely changed the local Somali clan power play. The economic clout of some clans was uplifted, while others who had been previously dominant, especially after the 1991 collapse of the Somalia state, found themselves left out and marginalized.

The hostility faced by Kenya in Gedo is linked to Jubaland’s local political dynamics and competition for resources.

Kenya lost almost an entire company of troops in the devastating 2016 El Adde attack by al-Shabaab. The attack was partly successful because the locals in Gedo were hostile and did not cooperate with the Kenyans. As Paul D. Williams observes in the Battle at El Adde, the poor relations between the KDF forces and the local population at El Adde could have played a role in the attack.

Blowback in the homeland

As early as 2009, two years before the incursion, experts had warned Kenya of the implications of a direct intervention on its domestic security. In an opinion piece published in July 2009, Daniela Kroslak warned “Kenya should not get sucked into the Somalia conflict but concentrate on securing its borders and actively supporting its resolution”.
Immediately after the troops crossed over into Somalia, al-Shabaab increased its activities inside Kenya, portraying its attacks as retaliation for the Kenya Defence Force’s involvement inside Somalia. The militant group carried out hundreds of attacks targeting civilians and security forces, and recruited adherents from among Kenya’s Muslim population.
Al-Shabaab also activated its dormant cells inside Kenya and carried out numerous attacks in major cities such as Nairobi and Mombasa, receiving a lot of public and international media attention. At first, at least in the first five years following Kenya’s incursion, security agencies were caught off-guard. It took the country years to adapt, and to identify active cells and dismantle them. Al-Shabaab has adapted accordingly, and since 2015, has concentrated its attacks on the border areas of the northeastern counties and in Lamu County. Collectively, the two regions have experienced dozens of attacks annually and given Kenya’s long and porous border with Somalia, it has been challenging for the Kenyan security agencies to root out al-Shabaab from the border areas.

Al-Shabaab has adapted accordingly, and since 2015, has concentrated its attacks on the border areas of the northeastern counties and in Lamu County. After a decade of military presence in southern Somalia, this the right time to assess whether the initial goals of the intervention have been achieved and whether Kenya needs to change its policy towards Somalia. It being an election year in Kenya, these discussions could come up but, so far, the subject of insecurity and Kenya’s military presence inside Somalia has not turned into a campaign issue. The two frontrunners in the presidential race, Raila Odinga and William Ruto, have not publicly commented on the subject and on the future of Kenyan troops inside Somalia. But as we get closer to the August election date, the issue could become an important campaign topic, especially if al-Shabaab undertakes a major attack targeting Nairobi or Mombasa. However, continued attacks at the periphery—in the northeastern counties and in Lamu County—are unlikely to generate debate at the national level.

First appeared on The Elphant