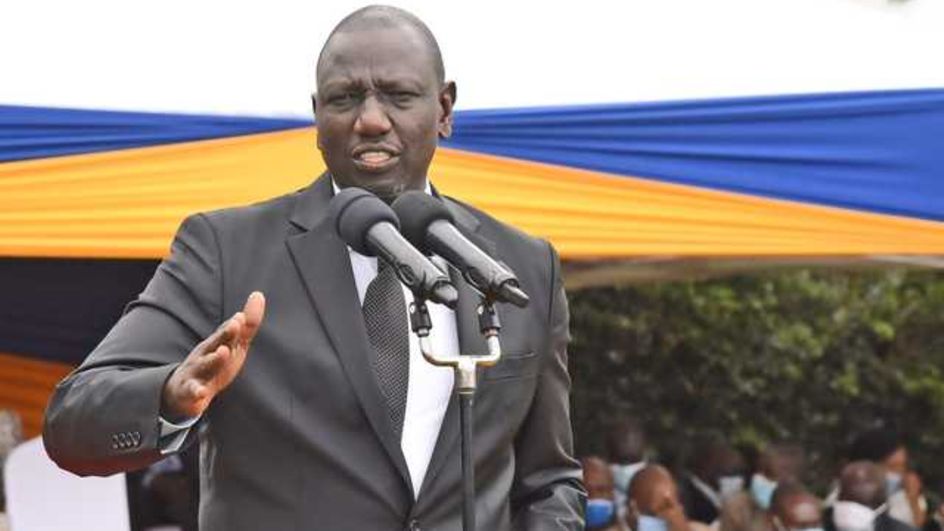 Deputy President William Ruto on Friday spoke about the purge in the Jubilee Party for the first time since his allies were kicked out of committees in Parliament.

Speaking at a burial in Chepkatet, Nandi County, the DP said that those regrouping to block  his 2022 State House bid will be in for a rude shock as he is well prepared.

“If you see them coming together because of me, it means that I am not a weak candidate, pray for me,” said Dr Ruto in vernacular.

The DP broke his silence since the purge of his key allies in Senate and National Assembly leadership positions.

“Even though there are many challenges in political parties and the country as a whole, all of us need to know that we will succeed only if we work together,” said Dr Ruto. “We need to remain united to ensure that what we started — uniting and developing the country — is achieved.”

“I ask you all, more so members of Jubilee Party, not to accept divisive and tribal politics. We have to chart our path together,” said DP Ruto.

He urged Kenyans to be wary of Covid-19.

While he strove to show his solidarity with his boss, the MPs who accompanied the DP accused President Kenyatta of trying to intimidate them for the purposes of thwarting their 2022 game plan.

Bahati MP Kimani Ngunjiri said: “When Uhuru and Ruto came together in 2013, they vowed to unite the country – until after 2017, when the Handshake and Building Bridges Initiative came in. The proponents of the two are after glorifying tribal chiefs and Dr Ruto refused and that’s why he is being fought.”

Soy MP and Jubilee deputy secretary-general Caleb Kositany questioned why the party had no offices in constituencies across the country.

“We are no longer in the Kanu era, when people would be removed from their positions because of questioning the government. Those who want me out should just explain how party funds are being used,” said Mr Kositany.

“If in Uasin Gishu County, the home of the deputy party leader of Jubilee, has no party office, how are the funds that we contribute monthly and other donations spent?”

Mr Kositany said that the DP will not engage a group that has not identified its presidential flagbearer.

“Those asking why the DP is silent, who do you want him to engage? Those who are regrouping have not come up with their candidate. Let them decide first then we will deal with them politically,” said the MP.

Aldai MP Cornelius Serem and his Tinderet counterpart Julius Meli said no amount of intimidation would stop them from supporting Dr Ruto.

“After the purge in the Jubilee Party, we have decided that you are either with us or you dine with the opponents,” said Mr Serem.

President Kenyatta’s men have trained their political guns on Mr Kositany, who is the DP’s de facto spokesman, arguing that he cannot serve in his current position while “tarnishing” the party.

Nyeri Town MP Ngunjiri Wambugu and Mr Kutuny wondered why the Soy MP was alleging corruption in the party when he has been the deputy secretary-general since its inception.

They said the claims were meant to undermine the party leader, President Uhuru Kenyatta.

The Nyeri Town MP criticised Mr Kositany, accusing him of failing to follow the right procedures within the party to prosecute his allegations rather than using the media.

“Kositany has been the deputy secretary-general of our party since its inception, which means that the insincerity of what he is saying is clear because he is only making the allegations of the financial impropriety now,” said Mr Wambugu.

“He is therefore operating a very transparent agenda of the Tangatanga, who are engaging in a hostile takeover of the party for the 2022 ambitions of DP Ruto.”

According to Mr Kutuny, the deputy secretary-general should not be allowed to continue to serve and there is a need of a National Executive Council (NEC) to convene to sack Mr Kositany for spearheading the agenda of another outfit.

He accused the MP of associating with Jubilee Asili, a newly formed political outfit, which is meant to undermine party leader President Kenyatta.

“Kositany cannot continue to serve in his current position. He has to be kicked out because he is fighting the party and he has associated himself with Jubilee Asili,” said Mr Kutuny.

After the removal of Aden Duale as the majority leader in the National Assembly recently, Mr Kositany is the only DP’s ally who still holds a high position in Jubilee.