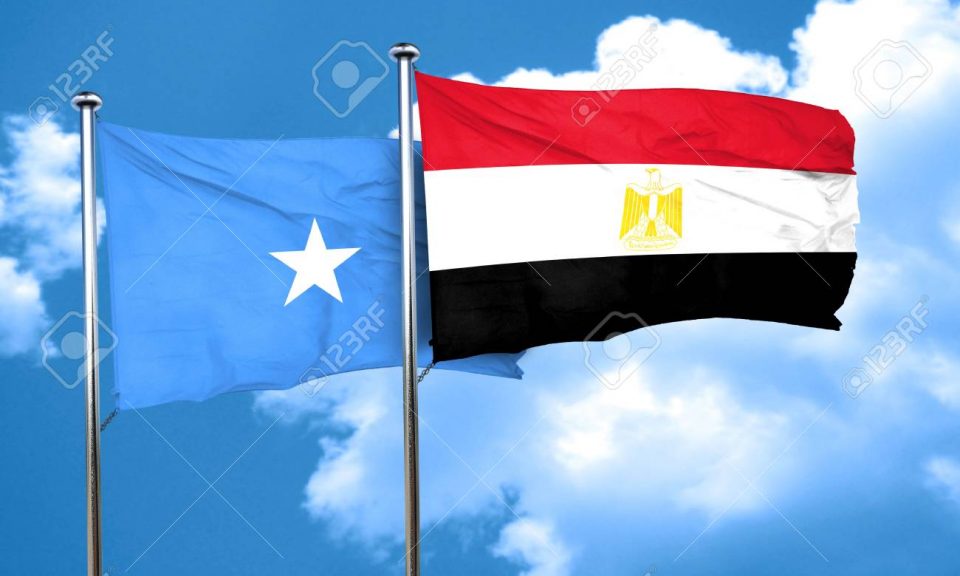 A general view of the Blue Nile river as it passes through the Grand Ethiopian Renaissance Dam (GERD), near Guba in Ethiopia, on 26 December, 2019 [EDUARDO SOTERAS/AFP via Getty Images]
By Abdulrahman Hadana
August 13, 2020 at 12:00 pm

In the context of the Renaissance Dam crisis which recently escalated between Egypt and Ethiopia, Somali reservations emerged regarding the fifth clause of the nine-clause resolution submitted by Arab League ministers on June 23, 2020. This angered the countries in question, who labelled Somalia’s reservations as “treachery” and a stab in the back to the Arabs. This comes despite Somalia justifying its reservations as bridging the views of Egypt and Ethiopia.

However, with all of this ruckus and lamenting, an Egyptian delegation visited Somaliland a few weeks ago and some international newspapers reported that Egypt intends to build a military base in Somaliland. This prompted Ethiopia during a press conference held in Addis Ababa a few days ago, to issue a warning through Foreign Ministry Spokesperson Dina Mufti against building such bases, as they would be harmful to Ethiopia’s security.

Will Somalia allow the construction of these bases on its territories?

To answer this question, we must go back in history to confirm that relations between Egypt and Somalia date far back in terms of geography and trade. Moreover, Somalia is still located on a waterway that is important to the Arab countries, specifically Egypt, which connects the Indian Sea, the Red Sea and the Suez Canal.

Relations between the two countries have been reconciled politically and religiously since 1332, when King of the Mamluks Sultan Jamal Al-Din asked King of the Bahri Mamluks at the time Nasir Ad-Din Muhammad Ibn Qalawun for help to confront the Abyssinian invasion of the sultanate, with the help of the Romans. Qalawun agreed, and sent soldiers and weapons to defeat the Sultanate’s enemy.

Nevertheless, the Somali-Ethiopian conflict continued until it escalated during the Ottoman rule, which ruled the Islamic world after the Mamluks. The Ethiopian-Adal war took place, and Somali Sultan Ahmed Al-Ghazi was killed.

After the Ottoman Caliphate had weakened, colonialism emerged and the British occupied northern Somalia in 1883, handing the Ogaden region to Ethiopia in 1954. This caused tension between Ethiopia and Somalia and popular anger against the English occupation, leading to the 1960s revolution against the English and Italian colonisers. This resulted in the death of the seasoned Egyptian diplomat Kamal El-Din Salah, in an attempt to thwart Italian colonialism, as the Italian colonisers tried to hinder his efforts to support Somalia and end the mandate.

President Gamal Abdel Nasser was strongly involved in this revolution by provoking the Somali people and inciting them against the British colonisers, using the Voice of the Arabs radio station, until they were victorious in liberation from colonialism and the idea became engraved in the hearts of both nations.

Following Somali liberation from colonialism and the northern and southern parts of Somalia united, Egypt helped the united Somalia economically by purchasing its bananas, and endorsed its newfound independence in government. Then, Greater Somalia headed back to the old conflict to liberate Somalia’s Ogaden region from Ethiopian control. The battle lasted between 1964-67. Egypt was interested in this battle for its own interests – Egypt’s national security – and protecting the Nile from dams that would decrease its water supply. On the other hand, it was interested due to the Zionists’ relationship with Ethiopia and allowing the immigration of the Ethiopian Jews to Israel to help the occupation. Therefore, it supported Somalia in the war with two military advisors and weapons.

Then came the rule of President Anwar Sadat, who was proud of his Nubian origins among the Somalis, stating that they had the same background. This was the golden era between the two neighbouring countries, as Somalia helped Egypt with bananas and meat during the October 1973 war. Moreover, Somalia was one of three countries that did not boycott Egypt due to the Camp David Accords in 1977.

With the departure of Sadat, the moment of separation occurred between the two countries during the presidency of ousted President Hosni Mubarak, who adopted the policy of self-reliance and disregard for Egyptian national security. This is especially true when the Somali military state fell and the country entered a cycle of violence, while Egypt remained cold-hearted in the face of Ethiopia by igniting civil wars amongst the Somalis. Ethiopia even became a challenge in Somali politics, either by exercising the policy of division, or by occupying some of the regions at different times between 1996-99.

The great catastrophe occurred when Ethiopia occupied Mogadishu and entered with its tanks in 2006. President Mubarak claimed at the time that he understood Ethiopia’s occupation of Somalia. It was a major failure that insulted Somalis, their history and their sacrifices. These words were uttered lightly, but they were a poisoned dagger in the backs of the Somali people and their cause.

Egypt’s leaders made terrible mistakes regarding their Somali brothers for thirty years, when they left the country to face its fate alone, abandoning it in favour of Ethiopia. They treated the Somalis with the logic of the Quranic verse: “So go, you and your Lord, and fight. Indeed, we are remaining right here.”

Therefore, Egypt’s leaders do not have the right at this difficult time to ask to establish military bases, because Ethiopia is helping Somalia against the youth movement. They should instead contain their dire blunders and deal with them.

As for Egyptian media, it should not engage in deepening the wounds and it must stop inciting hatred, especially in television shows, series, and dramas that have portrayed Somalia as a mockery for some time now.

My hope is that Somalia does not idly sit by and watch as the Egyptian people go thirsty, and God willing, they will do all that they can to act as mediator between Egypt and Ethiopia. According to Somali Foreign Minister Ahmed Isse Awad, they have already begun. Egypt have no right to interfere Somalia’s internal affairs.

Disclaimer: The views expressed in this article belong to the author and do not necessarily reflect the editorial policy of Warsan magazine