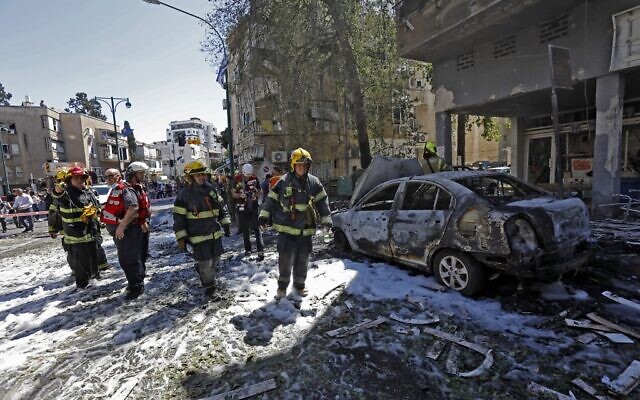 In any other circumstances, the major American news media and journalism associations would stand united in condemning a foreign country’s targeting of a media building during any conflict or military assault. But Israel is no ordinary country. The mainstream US media fails to challenge Tel Aviv no matter what it does.

On Saturday, in the middle of the day, Israeli missiles fired by US-made and funded warplanes struck and destroyed a 12-story high-rise building in the middle of a Gazan civilian area. The building housed the staff and studios of several media outlets, including the Associated Press, and several media advocacy groups that have, over the years, criticized Israel’s war crimes. The destruction of the media center should come as no surprise considering that Israel regularly dismisses the international rule of law when it comes to its military actions. Israel responded to the subsequent criticism by claiming the tower also housed Hamas militants and that it gave advance warning of the strike to allow those working inside to leave.

Meanwhile, as Israel accelerated its assault on Gaza and other Palestinian targets, it emerged that US President Joe Biden had rushed through a $735 million weapons package, which the Israeli military will take to replace the armaments it has used in the assaults that have killed more than 200 people. Tel Aviv insists the total killed in Gaza includes 130 militants, which is a backhanded acknowledgement that it has killed at least 70 civilians.

Israel has used the tactic of giving advance warning of targeted strikes in the past in an attempt to portray itself as conscientious of the lives of innocent civilians. However, the pre-bombing phone calls to Al-Jalaa demonstrate that the military not only had the telephone numbers of the many companies based in the building, but it also likely knew that it was almost exclusively used by noncombatants.

The groups that did protest against the strike included the Committee to Protect Journalists, which has for years exposed how Israel censors the news in order to manipulate international media coverage of the country. The Israel-based Foreign Press Association also expressed its dismay and concern over the destruction of the Al-Jalaa building. It stated that the attack demonstrates that no journalism is safe from Israel’s military attacks.

After many of its violent military attacks that have destroyed civilian targets, Israel asserts that civilians were used as “human shields” by Hamas militants. It also uses that assertion in its response to reports that its attacks have resulted in the killing of women and children.
The Biden administration immediately responded to the attack, asserting it strongly supported press freedom.

But, in truth, the protests from White House Press Secretary Jen Psaki were milquetoast.

She said: “We have communicated directly to the Israelis that ensuring the safety and security of journalists and independent media is a paramount responsibility.” Wow. Did they now? The Biden administration was far more damning of Russia for its alleged involvement in this month’s hacking of the Colonial Networks oil pipeline, describing it as a “criminal act.”

Israel’s real intentions could be even more heinous. The cameras of the Associated Press and other media positioned atop the tower block provided a live feed of the massive Israeli bombing of civilian neighborhoods in Gaza. These videos circulated throughout social media. And, although Facebook and Twitter have done much to censor videos and posts that are too critical of Israel, those that remain are heart-wrenching.

Despite some concerns about the killings of Palestinian civilians in Gaza, inside Israel and in the West Bank, don’t expect the media or any official agency in the US to hold Israel accountable. Who is going to investigate? The International Criminal Court (ICC)? Despite claiming to support human rights, the Biden administration has condemned the ICC’s intention to investigate Israel’s past violence

Do you really think the US would support a new investigation into Israel’s violent assaults on Gaza?

Such evictions are not only illegal under international law — which no one is willing to enforce — but they are also immoral, especially since those Christians and Muslims thrown out of their homes are quickly replaced by Jewish settlers.

Israel has blamed the violence on the Hamas terrorist organization, which operates in the Gaza Strip. But anyone with a moral foundation who condemns Hamas as a terrorist organization must also condemn the Israeli settler organizations and their government supporters as being terrorists too. Sadly, that equivalence has been ignored by the majority of the news media, which pulls its punches when it comes to criticism of Israel.

Ray Hanania is an award-winning former Chicago City Hall political reporter and columnist. He can be reached on his personal website at www.Hanania.com. Twitter: @RayHanania