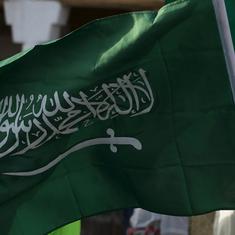 India on Thursday criticised Saudi Arabia for “gross misrepresentation” of its territorial boundaries on a banknote and asked the country to take urgent corrective steps.

Ministry of External Affairs Spokesperson Anurag Srivastava said at a press briefing that the note was issued on October 24 by the Saudi Arabian Monetary Authority, to mark the occasion of Saudi presidency of the G20.

“We have seen the banknote referred by you [Saudi Arabia] which gives an incorrect depiction of India’s external territorial boundaries,” Srivastava said. “We have conveyed our serious concern to Saudi Arabia, both through their Ambassador in New Delhi as well as in Riyadh, for this gross misrepresentation of India’s external territorial boundaries on an official and legal banknote of Saudi Arabia and asked the Saudi side to take urgent corrective steps in this regard.”

The Saudi banknote depicted Jammu and Kashmir to be a separate entity between India and Pakistan, according to The Hindu. It also appeared to show that Pakistan-occupied Kashmir and Gilgit-Baltistan were not in Pakistan’s control. Srivastava repeated that Jammu and Kashmir and Ladakh were an integral parts of India.

Pakistan is considered to be one of the closest allies of Saudi Arabia. However, the map on the banknote is being seen as a snub to the country, according to PTI.

India has responded sternly to any misrepresentation of its territory. Last week, the Centre wrote a letter to Twitter Chief Executive Officer Jack Dorsey after the social media platform’s location settings showed Leh as a part of China. The government had asked Twitter to respect “sensitivities of Indian citizens”. On October 18, Twitter had also shown Jammu and Kashmir as a part of China during a live broadcast by journalist Nitin Gokhale.

Earlier this week, the Parliamentary committee reviewing India’s privacy bill said that microblogging website Twitter’s explanation on showing Ladakh as part of China was “inadequate” and the act amounts to a criminal offence with an imprisonment of seven years.