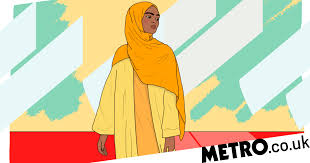 A growing number of women have started to come forward to talk about abuse, sexual assault and divorce (Picture: Ella Byworth for Metro.co.uk)

But that’s exactly what happened to me when, two years ago, I spoke about raising awareness of female genital mutilation (FGM) at an event. When I posted about my talk on LinkedIn, I was accused by Somali men on the platform of ‘spewing lies’. They even insisted that FGM ‘doesn’t happen’. It took everything in me to not respond. I reluctantly removed the comments, as I simply don’t have the energy to deal with men who want to silence me. It’s exhausting enough to speak up – even more so when people try to shut you down without listening. As an activist who is vocal about violence against women and girls, it was not the first time I had experienced these kinds of comments. Whenever I have talked about FGM on my social media – especially Twitter – I receive trolling comments and degrading abuse from anonymous accounts.

Advertisement These kinds of reactions are, sadly, what other Somali women are also currently experiencing, as a growing number have started to come forward to talk about issues like abuse, sexual assault and divorce. Earlier this year, a young Somali woman, now living in the US, outed her abuser on Twitter and shared her experience of sexual assault as a teenager. This inspired many other women of Somali heritage to tweet about things that have happened to them. These stories ranged from assault to harassment by family members, religious teachers, and male friends.

The common factor among a lot of these accounts was that many of the women felt silenced. They didn’t speak out sooner because of their fear of how the Somali community would react. If you look at some of their revelations, it’s easy to see why. Anonymous Twitter accounts bombarded them with dismissive replies, accusing them of ‘making Somali men look bad’. Time and time again, we hear tired lines like: ‘Don’t take this outside our community’ and ‘honour the family’. I am fed up. We need to stop sweeping the issues of domestic abuse, sexual violence and FGM under the carpet In many ways, the Somali community ethos is a positive one and gives us a sense of belonging. However, in this instance, it becomes a weapon to control the narrative. Calling out abusers is seen as an embarrassment, rather than what it is: a call to action to investigate and deal with the alleged perpetrator. Instead, victims are shamed. It is bizarre, and frankly wrong, that in our culture there seems to be more hatred directed towards people who shed light on injustices than those who perpetuate them.

According to data collected by the Gender-Based Violence Information Management System (GBVIMS), between January and September 2019, rape and sexual violence accounted for almost 30 per cent of all reported crimes in Somalia. The true figures are likely to be much higher – we can’t expect the statistics to accurately reflect reality until women feel safe and supported to talk. Silencing victims protects perpetrators, and allows them to get away with their behaviour. In 2018, it was reported that a six-year-old Somali girl was assaulted by her teacher. Her father told the media that two neighbours had since come forward to say that the same teacher had also assaulted their daughters – but shame had prevented them from reporting the incidents. Human Rights Watch notes that rape in Somalia often goes unreported because of the stigma attached to it. The few who dare to come forward are often not rewarded with justice.

Rape was only criminalised in the Puntland region of Somalia in 2016, but the law’s definition of it is narrow (marital rape is still legal, for example), and convictions are low. Many people turn to customary law, conducted by clan elders, instead – but this often leaves them without meaningful justice or protection. Some victims have even been married to their rapists, and their families paid cash compensation. On 17 June, I wrote on Twitter about the Somali culture of silence, because of the reactions I was seeing towards women like me disclosing their experiences of sexual abuse. I received a lot of support, but some claimed the issue isn’t with Somali men, but the Somali women who marry outside their culture. This just isn’t true: people of all cultures can perpetuate abuse. More:

World zone post image for post 13013973 200 coronavirus outbreaks hit Spain as more tourists start to fly out on holiday zone post image for post 13013392 Police find cocaine stuffed inside hundreds of individual coffee beans zone post image for post 13013100 Spanish resort closes all nightclubs after spike of infections in young people I am fed up. We need to stop sweeping the issues of domestic abuse, sexual violence and FGM under the carpet. It’s time we were able to call out toxic practices without fear of backlash. Firstly, we need to believe women. Rather than question the credibility of victims’ stories, we should listen, and investigate them. Secondly, abusers need to be held accountable, and survivors need to be supported through the process. In order for this to happen, we need a more robust legal system that seeks to protect victims rather than abusers. As for me, I will continue to divert my energy to supporting my fellow Somali women and girls, and speaking out on this harmful culture of ‘honour’. Because there is no honour in protecting perpetrators of abuse.