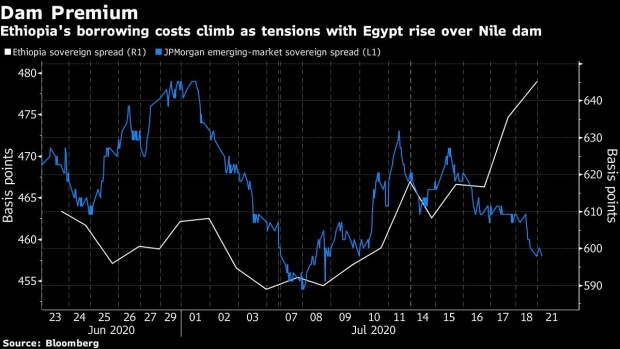 The African Union summoned regional leaders to discuss an impasse over an Ethiopian hydropower dam on the Nile River.

The virtual talks will take place Tuesday and may be a prelude to the resumption of negotiations between Ethiopia, Egypt and Sudan about how quickly the reservoir is filled, Sudanese Irrigation Minister Yasser Abbas said by phone Monday from Khartoum, Sudan’s capital.

“The meeting will take place within the context of the AU’s efforts to strengthen the negotiations and to infuse new momentum towards the resolution of all the outstanding legal and technical matters,” the office of South African President Cyril Ramaphosa, the current chairman of the African Union, said in an emailed statement.

Tensions over the dam ratcheted up last week on reports that the reservoir is filling up prior to the three countries finalizing an accord on water flows. The Nile is Egypt’s main fresh-water source and it has opposed any development it says will cause significant impact to the flow downstream — a position echoed by Sudan. Ethiopia, which plans a 6,000-megawatt power plant at the facility, has asserted its right to use the resource.

The extra yield investors demand to hold Ethiopia’s dollar bonds rather than U.S. Treasuries has been climbing since the reports about the dam filling up, while the average spread for emerging-market sovereign debt has narrowed.

Egyptian President Abdel-Fattah El-Sisi and Ramaphosa discussed the dam in a phone conversation on July 17. El-Sisi described the Nile waters as an existential issue for Egypt and stressed the importance of reaching a final accord on the Ethiopian dam’s filling and operation, the Egyptian presidency said.