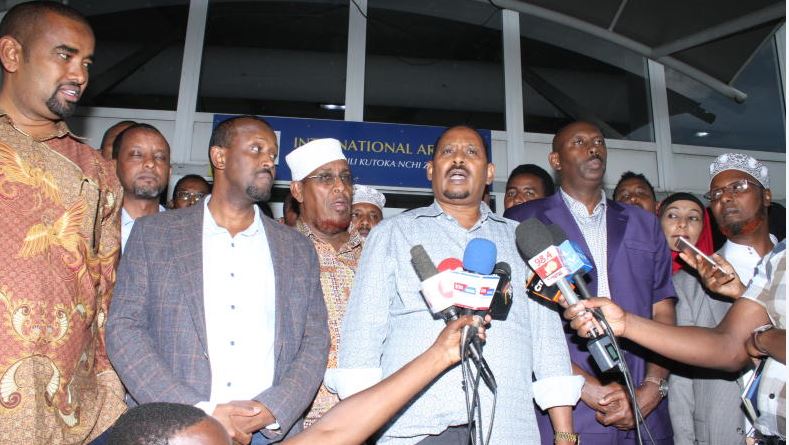 Wajir East MP Rashid Kassim (centre) flanked by other MPS whom he travelled with to Mogadishu, Somalia. [Collins Kweyu/Standard]

Eleven MPs from Northeastern Kenya who were detained for questioning at Jomo Kenyatta International Airport (JKIA) over their clandestine trip to Somalia have been freed.

Interior Ministry through Secretary for Internal Security Moffat Kangi says the 11 will not be charged. The ministry says the MPs have explained themselves, claiming they made the trip to Somalia to discuss security and education matters in the Northeastern region.  The MPs were accused of travelling without getting procedural Government clearance. The legislators from Wajir and Mandera counties jetted back to the country on Sunday from their ‘secret’ Saturday trip. “They were grilled by detectives at the facility’s police station over the Saturday’s secret trip to Somalia,” a source told Standard Digital. The trip comes in the wake of tension between Jubaland and Somali National Army troops near Mandera border.

Detectives are keen to unravel the agenda of the meeting considering the current strained diplomatic relations between Kenya and Somalia. The lawmakers were put to task by detectives to shed light on whether their mission was official or private and official, why was the Speaker of the National Assembly not informed. MPs are supposed to notify the Speaker and the Foreign Affairs ministry before any trip outside the country. Officials said the leaders do not represent Kenya’s government nor are they emissaries of the Foreign Affairs ministry. In Mogadishu, they met the Somali National Intelligence Agency (NISA) officials for a brief amid claims Somalia is lobbying them to push Kenya to stop supporting Jubaland leadership led by Ahmed Mohamed Islam Madobe.

The politicians are sympathetic to Somali clan politics and have been involved in direct talks with the Somali Government. There has been growing tension near the Kenyan border in Mandera following reports the SNA is amassing troops ahead of planned clashes. Jubaland security too says they are ready to defend their territories. The neighbouring country is accusing Kenya of harbouring Jubaland security minister, Abdirashid Janan Hassan Abdinur, currently a fugitive of the law.

The Difficult Case of Taiwan’s Sovereignty