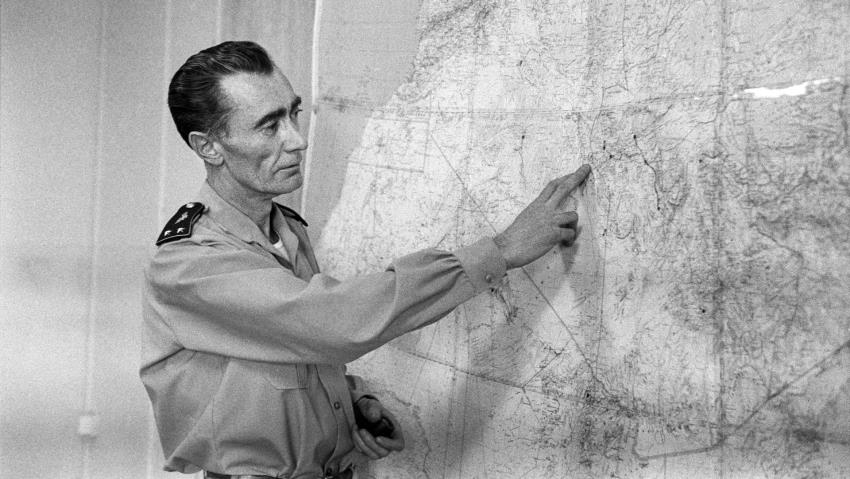 Comment: President Macron’s truth and reconciliation project will fail if it doesn’t acknowledge the toxic legacy of France’s nuclear projects in colonial Algeria, writes Malia Bouattia.
President Emmanuel Macron’s recent statement that a “memories and truth” commission will be established to look into the history of the French colonisation of Algeria, has led to much public discussion over this bloody legacy. And in this context, the absence of apologies or offers of reparations by the French state has not gone unnoticed.

One area of particular contention in this process is the ongoing and detrimental effects of France’s nuclear testing in Algeria, conducted throughout the 1960s.

France conducted its first nuclear test known as the “Gerboise Bleue” in February 1960 in the Sahara Desert – an atomic bomb that was four times the strength of Hiroshima. A total of 17 tests were carried out, four of them atmospheric detonations, and 13 underground.

Nuclear testing continued in the region until 1966, four years after the independence of Algeria from French colonial rule, due to a clause in the Evian Accords which were signed by the Provisional Government of the Algerian Republic (GPRA). The accords established the parameters for Algerian independence. The defeated colonial power demanded to be able to continue to destroy Algeria’s environment and poison its people.

At the time of the tests, around 40,000 people lived in the affected area, and the tests had a horrific effect on these communities. Many were impacted directly, while others were poisoned over time due to the radiation. In fact, 60 years after Gerboise Bleue, babies are still being born with illnesses and malformations.

The destruction caused to the land and animal species in the Sahara is also often overlooked. The radiation has caused a reduction in livestock and biodiversity as well as the vanishing of certain migratory birds and reptiles. The tests even led to the movement of sand dunes.

“These nuclear tests need to be seen in the context of a cruel and inhuman colonial experience that was synonymous with expropriation, genocide, racism and pauperisation,” explains Hamza Hamouchene, co-founder of Algeria Solidarity Campaign and Environmental Justice North Africa.

Nuclear waste remains in the region with the French state refusing to take action to – literally – clean up its (radioactive) mess. The International Campaign to Abolish Nuclear Weapons (ICAN) called on the French government to take responsibility for the long-term damage that it has caused.

In a report last year, the Nobel Peace Prize winning group highlighted that, “The majority of the waste is in the open air, without any security, and accessible by the population, creating a high level of sanitary and environmental insecurity”.

In addition to all of this, Algeria is still waiting to be told where the toxic waste was buried, a demand that ICAN also stressed. Jean-Claude Hervieux, a French electrician who worked on the nuclear testing efforts in Algeria told DW, “When we left Algeria, we dug large holes and we buried everything”.

Furthermore, doubt continues to shroud all the facts related to these and other colonial crimes committed by the French state as they scrambled to maintain power over Algeria, and later refused to even acknowledge the chapter in the country’s history. Important archives pertaining to the 132 years of occupation are yet to be returned or made public, for example.

Mustapha Khiati, president of the National Foundation for Health Progress and Research Development (FOREM) in Algeria, states that France had actually conducted 57 nuclear tests. In addition to the 17 tests, which are often mentioned, another 35 took place in Hammoudia in the Reganne region of the Sahara, and five nuclear experiments in In Ecker.

The list of colonial horrors linked to these tests includes rounding up Algerians from internment camps and prisons and tying them to pillars to analyse the impact of nuclear explosions on their skin.

The victims of France’s nuclear tests were not limited to Algerians (then and now). The French government also faced backlash from former soldiers and settlers involved in the nuclear tests that were being conducted in Algeria. Veterans from the French colonisation of Polynesia have similarly since suffered the consequences of participating in these operations with little to no protection.

The French nuclear test veterans’ association Aven, forced the state to recognise the suffering caused to some 150,000 military personnel. Despite decades of denying that the tests led to their infertility and illnesses, the government introduced a bill that would compensate these victims.

Algerians, however, are yet to even receive a basic recognition for the consequences of these events. Just one Algerian among hundreds has reportedly been compensated so far.

This all adds further clarity as to why Macron decided not to apologise or pay reparations for the colonial crimes committed by his Republic: Not only would the reparations be considerable, but they would involve generations of Algerians who continue to be plagued by the consequences of France’s desperate attempt to be recognised as a leading world power in the second half of the 20th century.

As Hamouchene aptly stated, it’s not enough simply “denouncing these colonial and neo-colonial legacies, and raising awareness for the people whose health, bodies, land and livelihoods have been sacrificed in order to accumulate wealth and concentrate power […] we need to address these issues through a justice lens and through democratic and reparative ways (moral and material reparations)”.

Given Macron has chosen “truth” as a key theme within the commission on French colonisation of Algeria, whether he will completely avoid recognition of this dark chapter – among many others – is yet to be seen.

Nevertheless, let’s not hold our breath. Macron has been tactical in how he has approached the “reconciliation” that he has supposedly committed to with the Algerian state. He offers symbolic but broadly irrelevant gestures, and makes sure to avoid anything that could impact France’s economic and political grip (past, present and future) in North Africa.

Returning the skulls of those Algerians barbarically killed for resisting French colonisation is meaningless in the face of the continued suffering and death of the earth, people and species in the Sahara desert at the hands of the same barbarians. The French left no trace of their “civilising mission”, despite their claims. Only death and destruction. Without recognition and reparation, that legacy will continue to live on.

Malia Bouattia is an activist, a former president of the National Union of Students, and co-founder of the Students not Suspects/Educators not Informants Network.