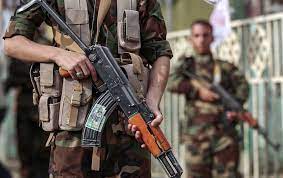 The internecine warfare in Yemen took another destructive turn Sunday as Iranian-backed Houthi rebels resumed their offensive to attempt to wrest control of the government’s last northern stronghold.

Earlier this month, the Houthis resumed an offensive to seize oil-rich Marib, some 120 kilometres (75 miles) east of the capital Sanaa.

The city’s loss would be disastrous for Yemen’s beleaguered leadership and the internationally recognized government.

Two government military officials said at least 16 pro-government forces were killed and 21 wounded in the past 24 hours, adding that “dozens were killed” among Houthi ranks, according to AFP.

One source said that the Houthis have attempted to lay siege to the district by cutting off supply lines to a district some 50 kilometers to the south.

The Yemeni civil war in now into its seventh year, with the Saudi-backed government fighting against the Houthis, who control the capital Sanaa and most of the north. It is also being viewed in a wider geopolitical context as a proxy war between two regional rivals – the Kingdom of Saudi Arabia and Iran.

Saudi Arabia, which borders Yemen, has also been a favorite target of Houthi rebels, who have attacked various airports with drone strikes and ballistic missiles.

The kingdom said it had foiled an attempted Houthi drone strike on the southern airport of Abha, just days after a previous successful attack set a civilian airliner ablaze.

The significant uptick in violence comes – not coincidentally – shortly after the United States removed the “terrorist” designation on the Houthis, which the outgoing Trump administration slapped on them as one of its final acts.