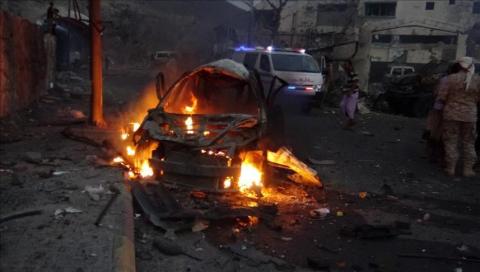 An explosion caused by an Improvised Explosive Device (IED) targeted a location of Saudi Arabia’s troops in Yemen’s southern province of Abyan on Sunday evening, a government official said.

The local government source said on condition of anonymity that “the IED’s explosion struck a high school building used by Saudi soldiers as a temporary location in the country’s coastal town of Shuqrah.”

The explosion caused no casualties among the Saudi troops but partially damaged the exterior wall of Shuqrah’s high school building, the source said.

The Saudi military unit based in Shuqrah was monitoring the ceasefire and supervising the mutual withdrawal of Yemeni troops from the flashpoint areas in Abyan, the source added.

Following the explosion, a number of Saudi military trucks left their location in Shuqrah and headed to the southern port city of Aden, according to the official.

In December, military officials of the Saudi Arabia-led coalition arrived in war-ravaged Yemen and began redeployment of forces affiliated with the Southern Transitional Council (STC) and Yemen’s government in the country’s southern provinces.

Saudi Arabia sought to implement a long-delayed power-sharing deal signed between the STC and Yemen’s government last year as well as putting an end for internal military conflict between its nominal allies.

In 2019, Saudi Arabia persuaded the STC and the Yemeni government to hold reconciliation talks, which succeeded in reaching a deal to form a new technocratic cabinet of no more than 24 ministers.

The impoverished Arab country has been locked in a civil war since late 2014, when the Houthis overran much of the country and seized all northern regions including Sanaa.