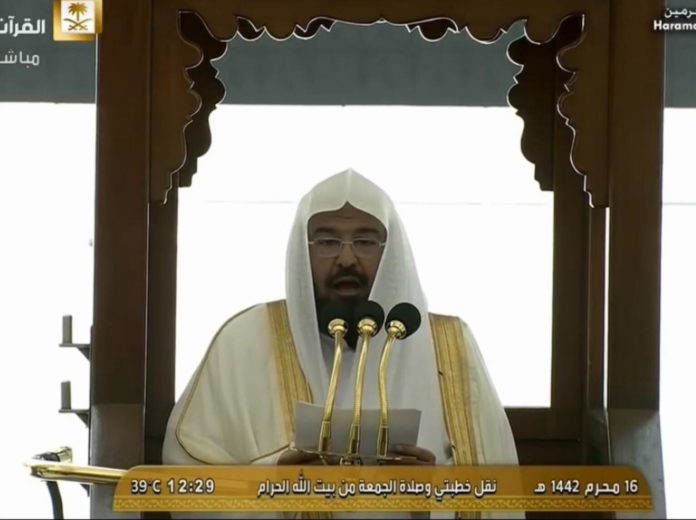 A khutba by the imam of Masjid al Haraam in Makkah, Abdulrahman al-Sudais, has been widely interpreted as Saudi official approval for the UAE-Israel peace deal as well as paving the way for a similar Riyadh-Tel Aviv rapprochement.

In normal circumstances Sudais’s Friday sermon, in which he preached dialogue and kindness to non-Muslims, making specific reference to Jews, would have been uncontroversial.

But its timing, just weeks after the UAE announced a peace deal with Israel, has rendered it a clear indication of Saudi approval given that all khutbas in the Grand Mosque are vetted by Saudi authorities.

The imam urged worshippers to avoid “any misconceptions about correct beliefs in the heart coexisting with having healthy dealings in interpersonal exchanges and international relations.”

He went on to mention several stories from the Prophet Muhammad’s life in which he maintained good relations with non-Muslims.

These included the Prophet performing wudhu from the bottle of a non-Muslim woman, forging a peace agreement with the Jewish inhabitants of the Khaybar region, and dealing so well with a Jewish neighbour that he eventually converted to Islam.

“When the course of healthy human dialogue is neglected, parts of people’s civilisations will collide, and the language that will become prevalent is one of violence, exclusion and hatred,” Sudais said.

He went on to stress the importance of remaining obedient towards leaders and authorities, and to be aware of “misguided factions and groups.”

But Sudais also used his sermon to discuss the status of the Al-Asqa Mosque in Jerusalem, which he said had been “taken prisoner.”

“This is an issue that is of utmost priority to the people of Islam and it must not be forgotten amidst new struggles that appear,” he told worshippers. “It must be kept in mind, but without exaggerations in the media or battles on the internet.”

At the end of his sermon, Sudais prayed to God to “rescue Al-Aqsa mosque from the clutches of the aggressors” and allow it to be “a revered location until the day of reckoning.”

Saudi Arabia does not have official diplomatic relations with Israel, but Gulf Arab nations have had increasingly public ties with Israel in recent years, boosted by their shared rivalry with Iran.

Sudan calls on Ethiopia, Egypt to resume talks over the controversial dam