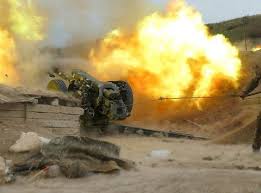 Erdogan urged Azerbaijan to keep fighting until it retook land it lost in a war with Armenia in the early 1990s that killed 30,000. (AFP)
Arab News

Recep Tayyip Erdogan was on a collision course with NATO on Monday after the head of the Western military alliance ordered the Turkish president to calm the conflict in Nagorno-Karabakh.
“We are deeply concerned by the escalation of hostilities. All sides should immediately cease fighting and find a way forward toward a peaceful resolution,” NATO chief Jens Stoltenberg said after talks with Turkish Foreign Minister Mevlut Cavusoglu.

“And I expect Turkey to use its considerable influence to calm tensions.”
But minutes before his own talks with Stoltenberg, Erdogan urged Azerbaijan to keep fighting until it retook land it lost in a war with Armenia in the early 1990s that killed 30,000.
Azerbaijan was “responding to an attack and saving Karabakh from its occupation,” Erdogan said.
“We, Turkey, say that we are always on the Azerbaijan side. As long as the Karabakh issue is not resolved, it will not be possible to end conflict in the region.”

Turkey’s membership of NATO has been under increasing strain since Ankara bought a missile defense system from Russia, the main military threat to the alliance, and began exploring for oil and gas in territorial waters belonging to Greece, a NATO ally.
“Stoltenberg’s call is unusual because NATO has in the past appeared powerless in the face of Turkey’s incursions into Syria, which have resulted in mass suffering of civilians,” Seth J. Frantzman, executive director of the Middle East Center for Reporting and Analysis, told Arab News.
Turkey was the main country fueling violence in the Caucasus because Azerbaijan felt it had a powerful ally, Frantzman said.
“Turkey is also exporting Syrian mercenaries, and that is also concerning for the US. And let’s not forget the claims that Turkey may have used Russian-made radar to track Greek warplanes. Such acts constitute a continued pattern for NATO’s concern.”
As fighting continued in Nagorny-Karabakh on Monday, Azerbaijan and Armenia accused each other of attacking civilian areas and said the death toll was rising from the deadliest fighting in the South Caucasus for more than 25 years.

Azerbaijan said Azeri cities outside Nagorno-Karabakh had been struck, taking the fighting closer to territory from which pipelines carry Azeri gas and oil to Europe. President Ilham Aliyev said Armenia must withdraw its troops for military action to stop.
But Armenian Prime Minister Nikol Pashinyan called on servicemen demobilized last year to volunteer to fight.”They are going to fight a war of survival for their fatherland,” he said.