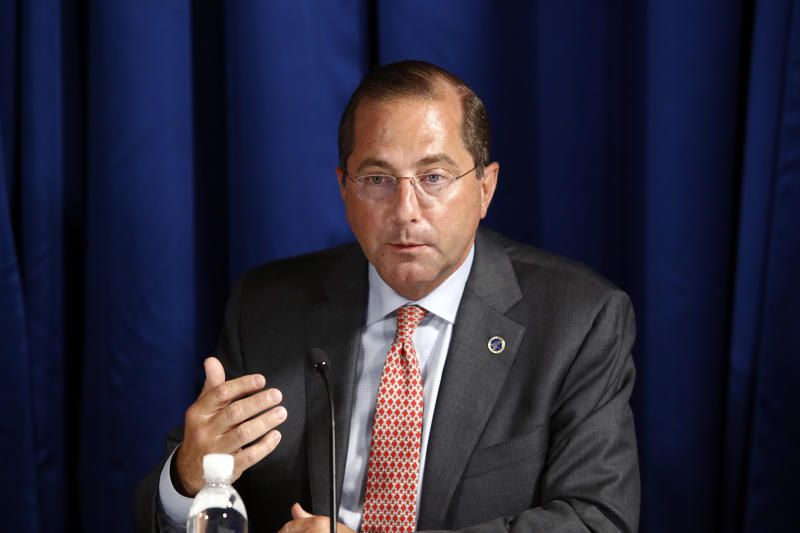 Health and Human Services Secretary Alex Azar is expected to meet Taiwanese President Tsai Ing-wen on Monday, threatening to further stoke tensions between the U.S. and China in the highest-ranking visit by an American official to the island in decades.

Health and Human Services Secretary Alex Azar is expected to meet Taiwanese President Tsai Ing-wen on Monday, threatening to further stoke tensions between the U.S. and China in the highest-ranking visit by an American official to the island in decades.

Azar, who said last week the trip would underscore “our shared belief that free and democratic societies are the best model for protecting and promoting health,” is set to discuss the international response to the coronavirus, along with supplies of medical equipment and technology. Besides meeting Tsai, he’s also scheduled to speak with Taiwan’s health minister on Monday, according to a person familiar with the situation.

Taiwan has been a rare global success story in containing Covid-19, as the U.S. grapples with one of the world’s worst outbreaks. In keeping with the democratic island’s stringent anti-virus procedures, Azar’s delegation will abide by measures including testing negative for the illness before departure and again when arriving in Taiwan, undergoing mandatory daily temperature checks and wearing masks at all times.

The visit has drawn China’s ire as the U.S. challenges Beijing on a range of fronts, from the early handling of the virus to Chinese-owned technology companies to a new security law for Hong Kong. Chinese Foreign Ministry spokesman Wang Wenbin last week said Beijing was “firmly opposed” to the visit, calling Taiwan “the most important and sensitive issue in China-U.S. relations.”

Taiwan’s Foreign Ministry hit back at China’s criticism of the visit on Thursday, saying Beijing was a “global troublemaker.”

“What the Chinese government can do is stop making irresponsible remarks on the international stage” and stop interfering with Taiwan’s dealings around the world, ministry spokeswoman Joanne Ou said at a briefing Thursday. “What the Chinese government can do is ‘return politics to the people, listen to the voices of the people, and understand the needs of the people’ because the 1.4 billion people of China and Hong Kong deserve freedom.”

Azar’s visit has little to do with the virus and is primarily aimed at sending a message to Beijing as it increases diplomatic and military pressure on Taiwan, according to Jonathan Sullivan, director of China programs at the Asia Research Institute and an associate professor at the University of Nottingham.

“There is a confidence in Taiwan, which this demonstration of American support will buttress, that it can live with Chinese pressures, limited as they are, especially during a moment when the backlash to ‘Chinese assertiveness’ is growing around the world,” he wrote in an email.

Azar’s trip coincided with a visit by former Japanese Prime Minister Yoshiro Mori to pay his respects to the late President Lee Teng-hui, who led Taiwan from dictatorship to democracy in the 1990s and reshaped the island’s relationship with China.

In a meeting with Tsai on Sunday that could further worsen Japan-China ties, Mori conveyed Prime Minister Shinzo Abe’s condolences while the Taiwanese president said she hoped the two sides can work together to combat the virus. The group included Abe’s younger brother, Nobuo Kishi, who is also a lawmaker in his ruling Liberal Democratic Party.