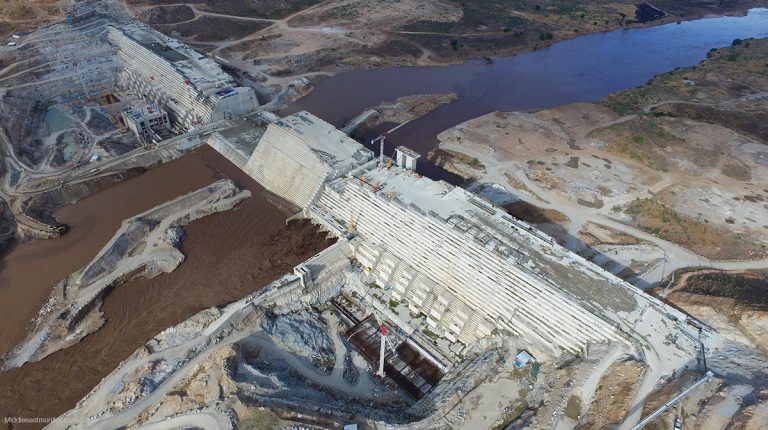 Sudan insists on mandating experts designated by AU to propose solutions, agreement over Nile dam. Both Egypt and Ethiopia rejected the Sudanese proposal.

The parties involved in the Nile dam dispute, namely Egypt, Ethiopia, and Sudan, failed to reach a consensus on the negotiation mechanism for the dispute, during their online meeting, on Sunday.

It was the latest round of talks over Grand Ethiopian Renaissance Dam (GERD) between the three sides after a hiatus of about one month. The virtual meeting commenced in the presence of the Ministers of Foreign Affairs, and Water Resources, from the three countries involved.

Sudan insisted on the need for mandated experts designated by the African Union (AU) to propose solutions to the contentious issues under negotiation, and to draft an agreement.

Both Egypt and Ethiopia rejected the Sudanese proposal, as they stressed the right of the three parties to formulate the agreement. This is especially as the AU experts have no experience in the technical issues related to the project.

Observers from the AU Assembly Bureau, alongside representatives from AU member states, the US, and the EU, attended the meeting. South Africa’s International Relations Minister Naledi Pandor headed the meeting, as her country is the current AU chair.

During the meeting, Egypt affirmed its readiness to engage in serious and effective negotiations in order to reach a legally binding agreement on the rules for filling and operating the Nile dam. This goal matches the AU Bureau’s previous decisions regarding the issue, Egypt’s Ministry of Foreign Affairs said in a statement following the meeting.

The ministry added that the meeting, however, could not reach a breakthrough due to disagreements over the negotiation mechanism, and the procedural aspects related to managing the process.

The meeting concluded that the South Africa’s representative would submit a report to South African President Cyril Ramaphosa, on the outcomes of the talks to consider the coming step.

Both Egypt and Sudan have repeatedly expressed their concerns over the Ethiopian dam’s safety. Moreover, Egypt depends heavily on River Nile waters, which it provide about 97% of the country’s present water supply. This entails that Egypt receives only 660 cubic metres per capita, one of the world’s lowest annual per capita water shares.

Egypt receives about 70% of its water flow from the Blue Nile and Atbara Rivers, both sourced in the Ethiopian plateau and which merge in north Sudan. Therefore, Cairo fears that the Ethiopian mega-dam could affect its water share.