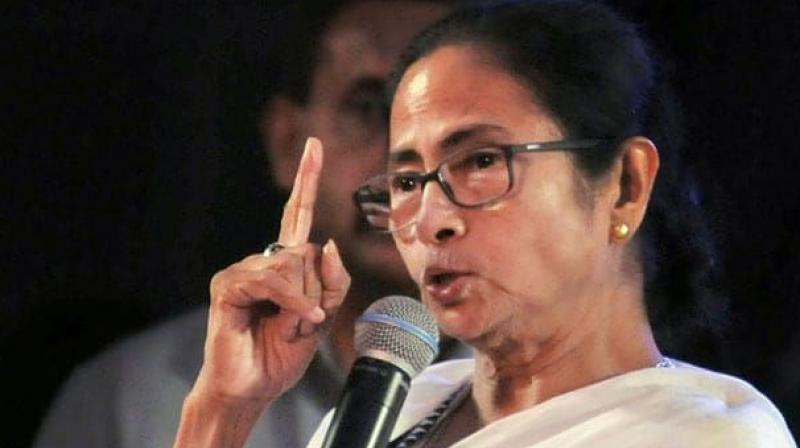 Published Dec 17, 2019, 3:42 pm IST
On Monday, the Chief Minister had spearheaded a protest march in Kolkata against the CAA and the NRC.
West Bengal Chief Minister Mamata Banerjee on Tuesday accused the ruling BJP of passing the Citizenship Amendment Bill (CAB) without consultation in the Parliament and reiterated that the NRC and Citizenship Amendment Act (CAA) will not be implemented in the state. (Photo: File)

“Our slogan is ‘No CAB, No NRC in Bengal’,” Banerjee said during a rally against the CAA and National Register of Citizens (NRC) in Jadavpur.

Taking a dig at Prime Minister Narendra Modi, who had said at a Jharkhand rally that the “protesters could be identified by their clothes”, she asserted that “miscreants cannot be differentiated on the basis of their attire”.

“The Bill was passed in the Parliament without any consultation. You cannot make out the religion of a person through their dress,” she added.

Condemning the violence at Jamia Millia University in Delhi, the CM said the “torture meted out to the students at the varsity was unprecedented”.

Alleging that the BJP was instigating violence in the country, she said the Citizenship (Amemdment) Bill was passed in a hurry in Parliament. “The BJP didn’t give opposition parties time to think and discuss the bill. It sought its passage in a hurry,” she added.

Banerjee condemned the violence that erupted in the Jamia Millia Islamia (JMI), alleging that the police brutally tortured the innocent students, which she said was “intolerable”.

“There is no end to conspiracies by the BJP. They discreetly light fires in the country. If you come across such fires, douse them immediately. We will not initiate violence,” she said.

She told the protesters to create badges with the slogan ‘No CAB, No NRC’ to signify the protest against the amended citizenship law and the proposed NRC exercise.

Terming the ongoing violence and arson in the state over the citizenship law as a “few minor incidents”, West Bengal Chief Minister Mamata Banerjee on Tuesday said just because the BJP has requisite numbers in Parliament, it cannot bully the states into enforcing the law.

Banerjee, who is also the TMC supremo, claimed that the Centre has stopped railway services in the state over “one or two minor incidents” of violence. “Owing to one or two small incidents, the Centre has stopped railways services in Bengal. It is the duty of the Railway Protection Force personnel to protect railway property, yet we provided them support. We have arrested more than 600 people (for creating trouble). I would request the railways and the central government to resume services,” she said here at a protest rally over the amended Citizenship Act.

On Monday, the Chief Minister had spearheaded a protest march in Kolkata against the CAA and the NRC.

This came amid protests against the Citizenship (Amendment) Act, 2019 in several parts of West Bengal.

The Act seeks to grant Indian citizenship to refugees from Hindu, Christian, Sikh, Buddhist and Parsi communities fleeing religious persecution from Pakistan, Afghanistan, and Bangladesh and who entered India on or before December 31, 2014.