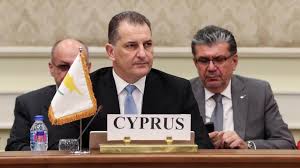 Yiorgos Lakkotrypis, Cypriot Environment and Energy Minister speaks at the third East Mediterranean Gas Forum (EMGF) meeting which is hosted by Egypt and brings together Cyprus, Greece, Israel, Italy, Jordan and the Palestinians in Cairo. (Reuters)

Cyprus accused on Sunday Turkey of turning into a “pirate state” in its attack of Ankara’s exploratory oil and gas drilling off its coastal waters a day after the EU issued its own warning.

“Turkey is turning into a pirate state in the eastern Mediterranean,” said the statement from the Cypriot presidency.

“Turkey insists on going down the path of international illegality it has chosen,” it added.

The statement came a day after the European Union called on Turkey to drop its plans to drill around Cyprus and the eastern Mediterranean, arguing such exploration was “illegal.”

“The intention by Turkey to launch further exploration and drilling activities in the wider region goes, regrettably, in the opposite direction,” he said, in a statement released Saturday.

But Turkey’s foreign ministry said Sunday: “The Turkish Cypriots have rights on this field… as much as the Greek Cypriots.

“The two sides will share the income if oil or natural gas are found there.”

Its ship Yavuz had arrived at the “G” license field for its first round of drilling, the statement added.

Turkey’s President Recep Tayyip Erdogan vowed Thursday that Turkey would start exploring for gas in the eastern Mediterranean “as soon as possible” this year, after signing a maritime deal with Libya.

Ankara angered neighboring countries in the Mediterranean with an agreement signed with the Tripoli government in November, which claimed extensive areas of the sea for Turkey.

Greece says the deal fails to respect its maritime rights around the island of Crete.

Turkey has already upset Cyprus by sending ships to search for oil and gas off the divided island.