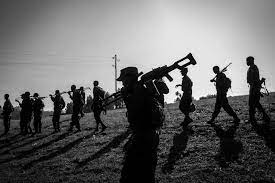 H.R.6600 is a foreign policy mistake which would appoint Washington imperialist judge of Ethiopian domestic affairs.

The Russian assault on Ukraine is pushing other global conflicts into the shadows, but the latter keep festering nonetheless. Some of these will also have important geostrategic consequences. One of them is the still ongoing armed conflict in Ethiopia, initiated by the TPLF (Tigray Peoples Liberation Front) with a massive and unprovoked attack the night of November 3, 2020. The United States has not played an enlightening role in the conflict, as it primarily blamed the federal government for the violence.

Politically, U.S. efforts over the past year and a half have been even marked by undue interference and sanctimoniousness. U.S. policy circles have not demonstrated honest understanding of the war, of its context, and of the means to help end it. The State Department as well as USAID (which is self-admittedly an arm of U.S. foreign policy) have rarely sided with Ethiopian government efforts to bring this conflict to an end and seem to have condoned the TPLF—incorrectly equating it with the Tigrayan people.

The U.S. Congress has not stayed far behind the executive branch foreign policy establishment. The latest Ethiopia gaffes to be produced by the United States will be in the discussion and voting on H.R.6600, proposed in Congress on February 4 by Rep. Tom Malinowski (D, New Jersey), and Rep. Young Kim (R, California). The initiative is surrealistically called the “Ethiopia Stabilization, Peace, and Democracy Act.” In practice, it will do more of the opposite: produce destabilization, hinder peace, and undermine the democracy in Ethiopia. Here is why.

In brief the bill says that the State Department is required to develop a plan for supporting democracy and human rights in Ethiopia, including plans to combat hate speech online and support accountability measures for atrocities and efforts to buttress a national dialogue. Moreover, it proposes that the U.S. president impose sanctions on individuals who undermine negotiations to end the conflict, commit human rights abuses, exacerbate corruption, or provide weapons to any hostile party. The bill suggests that security assistance to the government of Ethiopia should be suspended until it ceases offensive operations, takes steps towards a national dialogue, improves protection of human rights, allows unfettered humanitarian access to conflict areas, and investigates allegations of war crimes. The bill also determines that the U.S. must oppose loans or other financial assistance from international agencies such as the World Bank and IMF to the governments of Ethiopia and Eritrea unless for humanitarian purposes, until they take steps to end the war and restore respect for human rights. It concludes that a determination from the State Department is required concerning allegations of crimes against humanity, war crimes, and genocide in Ethiopia.

This series of proposals is a program of unprecedented interference in the internal affairs of Ethiopia, based on a lot of ignorance and bias. Many of the conflict issues and food aid efforts are under the brief of the Ethiopian government and are being addressed already as much as their financial means allow. Nowhere does the bill mention the TPLF and its war actions. This is surprising if not laughable; it almost looks like TPLF people were co-drafters of the legislation. The target of the sanctions and strictures in the bill are Ethiopian and Eritrean government people. Again, no one denies that the humanitarian problems in Tigray are serious and painful: There is a huge lack of food supplies, fuel, medical facilities, etc. In the early phase of the conflict there were unlawful killings and expulsions by federal army soldiers, Eritrean soldiers, and militias—in a spiral of TPLF-induced violence. But Ethiopian federal force excesses were and are being tackled via the courts. TPLF violence and abuse is not: Impunity reigns, as the TPLF does not call any of its forces to account.

In the course of 2021, notably after their rejection of a government ceasefire offer in June, the TPLF’s violence was dramatically expanded in the Amhara and Afar Regions in a spirit of revenge and destruction. The onus of initiating, perpetrating, and sustaining the violence thus lies with the TPLF. And there has been no more ground fighting in the Tigray Region since June 2021: All of it occurs in the Afar and Amhara regions, still partly occupied as of March 2022. Any serious analysis would reveal that responsibility for the huge damage, the large number of victims, and the abhorrent nature of the violence as a war policy was on the TPLF side. The problems were compounded by hundreds of thousands of civilians in the Amhara and Afar Regions made international displaced persons by the TPLF; they are still waiting in camps, with nothing but their bare clothes as possessions. In addition, many in western Ethiopia are still terrorized by the “Oromo Liberation Army,” allied to the insurgent TPLF and engaged in what some are describing as an “ethnic cleansing” operation—they are not mentioned in the H.R. bill either. The same goes for Gumuz violent rebels in the west, who appear to get support in Sudan, probably with Egyptian backing.

On March 24, the Ethiopian government proclaimed a “humanitarian truce.” The TPLF, fearing to lose the propaganda battle, later that same day issued a bizarre statement indicating that they accepted the idea. Unfortunately, it was not a clear commitment. TPLF has not shown an interest in stability or cessation of conflict, neither in Ethiopia as a whole nor in “its own” region, Tigray. New fighting continued to erupt even after their statement on cessation of hostilities.

In response to the bill, Ethiopian government spokesperson Dina Mufti said: “The [H.R.6600] bill doesn’t measure up to the level of historic relationship between Ethiopia and the United States.” That is putting it in an admirably mild way. The bill would be an unprecedented and an unjustifiable blow to an elected government and will jeopardize a long and dynamic relationship between two countries. It would alienate not only the Ethiopian government but also the Ethiopian people from the U.S., and regrettably so, because most Ethiopians value a good relationship with America. Millions of Ethiopians have family and friends living there, thousands have studied there, and economic and strategic relations are important.

To jeopardize this growing and often mutually beneficial relationship is irresponsible. The H.R.6600 bill and its aggressive and arrogant tone would add extra damage to the situation, after the already absurd delisting of Ethiopia from the Africa Growth and Opportunity Act, which is only hurting ordinary workers and not members of the government. As law, H.R.6600 would even be imperialist: The Biden Administration could wield control over Ethiopia in social media, traveling, domestic politics, economic affairs, international loans, etc. under a 10-year sanctions regime. Ethiopia’s right to economic development would in fact be denied; as it says in Section 6(c) of the bill, Ethiopians would only benefit from support for projects on “basic services.” These economic impacts would also lead Ethiopia to intensify relations with China.

Apart from its intrinsic failings, H.R.6600—if made law—would impose a harsh regime on Ethiopia that will not be productive or bring the desired results; only more socio-economic hardship and misery will follow. If the U.S. Congress wants to see stabilization, peace, and democracy efforts in Ethiopia, it will do well to start developing a more balanced approach to the Ethiopian conundrum. A better approach should be based on an analysis of what in fact happened: an armed insurgency by a rogue party that aimed to overthrow the federal government and went on to destabilize the country by war, mass killings, destruction, and economic sabotage.

While the Ethiopian government can be urged to do more, it is time for the U.S. to put heavy pressure on the TPLF and call them to abandon armed insurgency and be accountable under the law.  The severe sanctions approach in H.R.6600 smacks of the sanctions against Russia in the Ukraine war. But Ethiopia is not Russia. H.R.6600 is entirely unhelpful and should go where it belongs, in the dustbin.