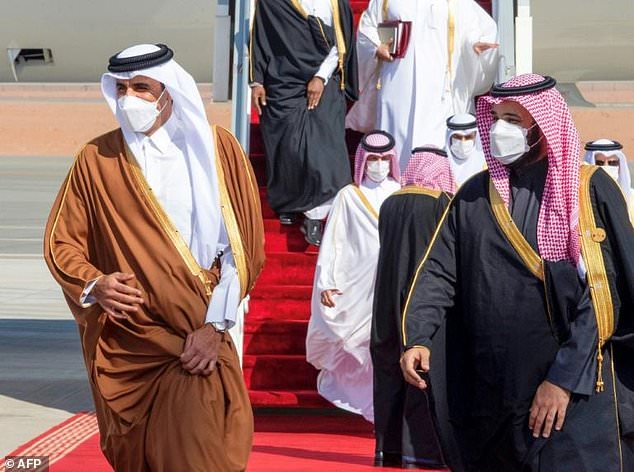 Qatar’s ruler Sheikh Tamim bin Hamad Al-Thani is given a warm welcome by Saudi Crown Prince Mohammed bin Salman on his first visit after three and a half years of broken relations, fueling hopes of rapprochement at a Gulf summit

Qatar’s leader arrived in Saudi Arabia Tuesday, greeted by de facto ruler Crown Prince Mohammed bin Salman with a tight embrace, ahead of a summit that could yield more breakthroughs in a regional crisis.

Saudi Arabia led a coalition of countries in the Gulf and beyond that cut ties and transport links with Qatar in June 2017, charging that it was too close to Iran and backed radical Islamist groups — allegations Doha has always denied.

Those countries, along with Oman and Kuwait which have mediated between the two sides, will meet in the Saudi city of Al-Ula, after Riyadh overnight re-opened its borders to Doha despite lingering enmity between the neighbours.

The warm welcome that Prince Mohammed extended to Qatar’s ruler Sheikh Tamim bin Hamad Al-Thani, with the pair chatting as they walked to a waiting limousine, will also fuel hopes for a wider deal.

Sheikh Tamim’s attendance at the summit, visiting Saudi Arabia for the first time since the crisis began, is seen as a key vote of confidence in the process and was only confirmed after the concessions were announced.

“Confidence building measures seem to start with Saudi and Qatar, but the rest will join even if later,” said Kuwait University assistant professor Bader al-Saif.

“Any step toward reconciliation is better than no step at all. The Gulf Cooperation Council (GCC) requires a major reset and can offer much more than it has.”

Washington has intensified pressure for a resolution to what Doha calls a “blockade”, insisting Gulf unity is necessary to isolate US foe Iran as the curtain falls on Donald Trump’s presidency.

Jared Kushner, Trump’s son-in-law and senior adviser who shuttled around the region to seek a deal, will attend the signing on Tuesday of the “breakthrough” agreement, a US official said.

“The Trump administration will claim this as another victory for sure,” said Royal United Services Institute analyst Tobias Borck, stressing that the two sides have not yet normalised relations. 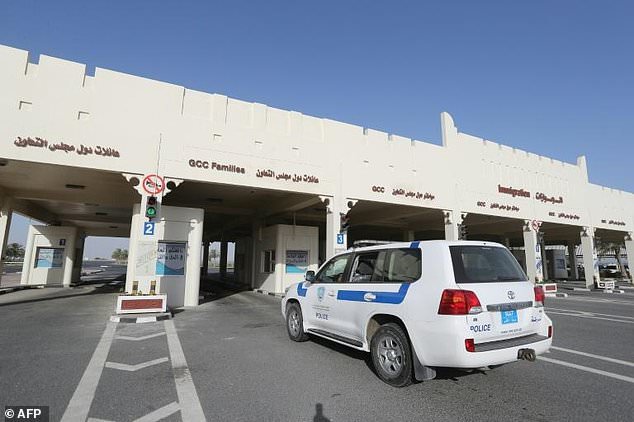 Kuwaiti Foreign Minister Ahmad Nasser Al-Sabah announced on state television late Monday that “it was agreed to open the airspace and land and sea borders between the Kingdom of Saudi Arabia and the State of Qatar, starting from this evening”.

Drivers south of Doha on the usually calm Salwa highway towards the Saudi border at Abu Samra sounded their horns and waved their arms from their car windows in the wake of the announcement, an AFP correspondent reported.

“We will see all Saudis here, also all Qataris will visit Saudi Arabia, and we will be friends as we were before and better,” said Hisham al-Hashmi, a Qatari who wore a traditional thobe and winter headdress, with an earphone in one ear.

The Saudi-led GCC hawks, along with Egypt, in 2017 closed their airspace to Qatari planes, sealed their borders and ports, and expelled Qatari citizens.

An information battle raged online with the two camps trading allegations and barbs, deepening the resentments.

Observers have warned that the UAE could be the spoiler for reconciliation attempts, having heaped criticism on Qatar and its leadership since the spat erupted.

The UAE and Qatar in particular remain divided over Doha’s perceived support for movements aligned to the Muslim Brotherhood and the two countries’ backing for rival groups in the Libya conflict.

The diplomatic freeze has only served to make Qatar more self-sufficient and push it closer to Iran, observers say. It has also hurt Saudi strategic interests.

Analysts say that Riyadh lifting the ban on Qatar using its airspace, borders, and waterways could have been at the insistence of Doha, before the emir agreed to attend the summit. 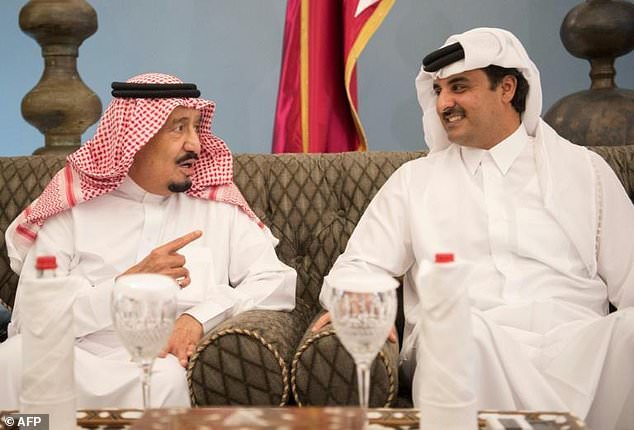 Any rapprochement may however prove to be preliminary, analysts and diplomats have said, with the underlying factors remaining unaddressed, and few expect a comprehensive resolution to the row.

At the start of the crisis, the boycotting countries issued a list of 13 demands to Doha, including the closure of pan-Arab satellite television channel Al Jazeera, undertakings on “terror” financing, and the shuttering of a Turkish military base in Qatar.

Qatar has not publicly bowed to any of the demands.