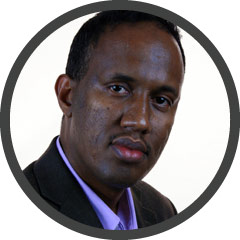 It doesn’t take much digging to find news stories about the growing East African community in Minnesota. Whether the good (someone from our community winning elected office for the first time) or the bad (attacks on our places of worship), it seems our small community gets a lot of attention from the Minnesota media. But the stories often focus on the more sensationalistic aspects of our lives.

In reality, our community is not that different from many that have come before us. We moved here to escape a bad situation and have worked hard to be successful and make Minnesota our home. Our kids go to school and we do the same jobs as every other group of Minnesotans. We are doctors, janitors, warehouse workers, office staff, schoolbus drivers and more. Our dreams are just like everyone else’s dreams: the ability to live a happy life and hopefully build a better world for our children.

In my job as executive director of the Awood Center, we have made a lot of news supporting Amazon warehouse workers who have been leaders in the fight to demand better from one of the richest, most powerful corporations in the world. We have heard from workers as far away as California and Germany about our work inspiring them. When workers have picketed and gone on strike, we have seen extensive coverage from local, national and even international press.

We are just the latest wave

They often make particular note of the fact that the workforce standing up to this corporate giant are predominantly East African. But our story isn’t new. We are just the latest wave of new Americans who are standing up to corporate greed to win a better life for working families.

The piece “The Rise of Industrial Labor in Antebellum America” notes “More than five million immigrants arrived in the United States between 1820 and 1860. Irish, German, and Jewish immigrants sought new lives and economic opportunities.” Over time these groups became part of the fabric of America, but at the time, the piece notes, their arrival “triggered a backlash among many native-born Anglo-Protestant Americans.” Our community knows about that. In the minds of some, we are somehow both stealing jobs and also lazy “takers” who won’t work. These contradictory attacks are the same ones groups of new immigrants who came before us have faced. Same story, different actors.

We know there are some in power, both in big corporations and the politicians who do their bidding, who see the growing East African community in Minnesota as a tool to divide working people. They have a clear plan to separate us from other Minnesotans so we can’t work together to win good jobs, affordable health care and safe housing. They know that their greedy actions are unpopular, so they tell us to be afraid of people different from us – whether it be skin color, religion or where we were born – and that working together isn’t worth it because “those people” would also suddenly have a good life.

We are your neighbors

But “those people” are us, and we are you! We are your neighbors. Our kids play the same sports and our families spend our summers at the same lakes and parks as you. We sled on the same hills in the winter, and every February when we are scraping off our cars, we too, wonder what we are doing here. We lie awake in bed at night worrying about the cost of health care, or hoping that sound our car is making isn’t going to get worse before our next paycheck. We see firsthand the cost of buying in to the divisive scare tactics that are so often used. We know it hurts our community, but it also results in us not unifying to win what we deserve. That means all working people continue to struggle more and more to get ahead, while the wealthy and powerful take even more for themselves.

Someone in rural Minnesota, who is struggling to pay the bills and wishes for health care that not only covers what our families need, but doesn’t send us into bankruptcy, has more in common with a Somali office worker in Minneapolis who has the same hopes and fears than the greedy CEOs who are working to keep us apart.

At the Awood Center, we are working to build power for the East African community, but we are crystal clear that as working people, our struggles are linked, no matter where we were born or what color our skin may be. When we have won changes that help workers at Amazon, they have helped workers from every race, religion and background.

My community knows that this next year could get ugly. We know that there are people in power who will continue to use the East African community as a “wedge” to get people to support issues and candidates who don’t offer them anything besides fear. I believe that Minnesota is better than this.

There has been an ongoing campaign saying that in Minnesota we are “Greater than fear.” I truly believe that to be the case, and I hope we can see beyond the scare tactics, and find a way to work together across our differences to make sure Minnesota continues to be a wonderful place for all of us to raise our families. Even with the cold.

Abdirahman Muse is the executive director of the Awood Center in Minneapolis. The center’s mission is to build economic and political power among workers in the East African community of Minnesota.