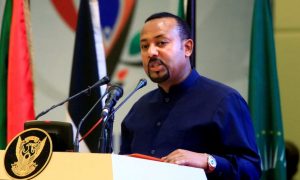 The prime minister of Ethiopia, Abiy Ahmed, has won the 2019 Nobel peace prize, the Norwegian Nobel committee has announced.

Berit Reiss-Andersen, the committee’s chair, said the award recognised Abiy’s “efforts to achieve peace and international cooperation, and in particular his decisive initiative to resolve the border conflict with neighbouring Eritrea”.

Elected in April last year, one of Abiy’s biggest victories was the peace deal, signed in July last year, which ended a nearly 20-year military stalemate with Eritrea following their 1998-2000 border war.

Abiy has also pushed through reforms at home, dramatically changing the atmosphere in what was known as one of the more repressive states in Africa. His public renunciation of past abuses by previous rulers drew a line between his administration and those of his predecessors, as did the appointment of former dissidents to senior roles, as well as large numbers of women.

“When Abiy Ahmed became prime minster, he made it clear he wished to resume peace talks with Eritrea … In close cooperation with the president of Eritrea, he quickly worked out the principles for a peace agreement,” the committee said.

The New Zealand prime minister, Jacinda Ardern, whose response to the Christchurch shooting was widely praised, was also thought to be in the frame, as were Alexis Tsipras and Zoran Zaev, the prime ministers of Greece and North Macedonia, who ended 30 years of acrimony between their countries.

Ninety nine Nobel peace prizes have been awarded since 1901, to individuals and 24 organisations. While the other Nobel prize laureates are announced in Stockholm, the peace prize is awarded in the Norwegian capital, Oslo.

According to the Nobel peace prize website, 301 candidates had been put forward for this year’s award. However, the committee does not announce the names of nominees until 50 years have passed.

Abiy, 43, has forged a reputation as a daring leader prepared to take risks to tackle decades-old problems.

A former military officer specialising in cyber intelligence, the peace deal with Eritrea surprised and delighted tens of millions of people across East Africa.

The conflict had cost both countries dearly in lives and scarce resources, and was a brake on development across much of the volatile region.

More recently Abiy played a key role in brokering a political deal in neighbouring Sudan which halted a slide into chaotic violence after the fall of veteran dictator Omar al-Bashir, while retaining many of the gains of pro-democracy protesters.

Abiy, who often relies on bold personal initiatives and charisma to drive change instead of working through government institutions, is the country’s first leader from its largest ethnic community, the Oromo, who have complained for decades of economic, cultural and political marginalisation, and has appointed women to a series of high-profile jobs, including half ministerial posts.

In Addis Ababa, huge crowds have been welcoming home exiled dissidents. Residents who once feared speaking publicly about politics now talk of little else. Flags and symbols long banned by the Ethiopian People’s Revolutionary Democratic Front fly across the city.

Other initiatives, such as the planting of millions of trees, have won further international support and sympathy.

Born in western Ethiopia, Abiy joined the resistance against the regime of Mengistu Haile Mariam as a teenager before enlisting in the armed forces, reaching the rank of lieutenant-colonel. He has a doctorate in peace and security studies. After a stint running Ethiopia’s cyber-intelligence service, he entered politics eight years ago and rose rapidly up the ranks of the Oromo faction of the EPRDF, which has historically been at odds with the Tigrayans.

One personal acquaintance described the new Nobel Laureate as “always looking ahead for the future” in an interview with the Guardian shortly after Abiy survived an apparent assassination attempt in 2018. Former colleagues said shelves of books on religion, philosophy and science filled Abiy’s office.

“He is physically active and very well organised … He did not have a secretary because he wanted his office to be accessible. His office door was literally never closed,” one said.

(Original article appeared in The Guardian)