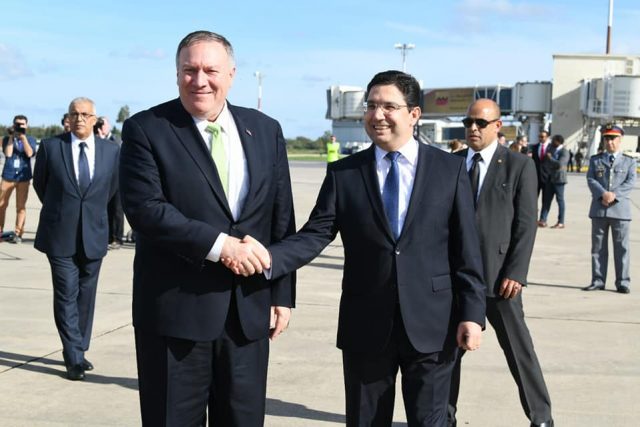 US sources discredit Israel- Morocco normalization reports, saying the whole narrative was cooked up by Israeli media and officials for political gain.

A day before Pompeo’s much-awaited Rabat visit, reports were rampant that the US official would use his discussions with senior Moroccan officials to push for a historic breakthrough in Rabat-Tel Aviv relations.

In addition to the establishing of formal, official diplomatic relations between Morocco and Israel, the reports insisted, normalization would entail the signing of a non-belligerence agreement between the two countries, thereby ending Morocco’s policy of constant support for the Palestinian cause.

But Pompeo discussed neither Israel nor normalization with any of the top Moroccan officials he met during his one-day stint in Rabat, as indicated in a statement from the US State Department.

According to statements from senior US officials, not only was normalization never discussed between Pompeo and his Moroccan hosts, the whole narrative was in fact an Israeli media move to attract substantial attention to something that was never on Pompeo’s agenda as he visited Morocco.

“It wasn’t a topic of discussion,” one senior US official said in a press briefing after Pompeo’s visit, referring to the normalization reports. The official went further than discrediting the reports, however. He suggested that the normalization fuss was most probably a deliberate move by Israeli media (and officials) to push forth an issue that is important to them.

When he read in Israeli media that normalization would be the center of Pompeo’s discussions with Moroccan officials, especially with King Mohammed, the official explained, “it struck [him] as just another Israeli leak to the press of their own issue. But it was coincident with our trip, but it wasn’t on our agenda.”

The normalization reports were given credence as they appeared to originate from Israeli PM Benjamin Netanyahu, who, after meeting with Pompeo in Lisbon on December 4, told Israeli outlet Channel 12 that he hoped for an imminent and unprecedented diplomatic breakthrough with Rabat.

Instead, during his visit, Pompeo focused on discussing US-Morocco trade and security cooperation. “A pleasure meeting Morocco’s Foreign Minister Nasser Bourita again today to reaffirm the importance of our enduring partnership, which is expanding economic opportunity and increasing security for both our countries,” he said in one of his numerous tweets about his Rabat visit.