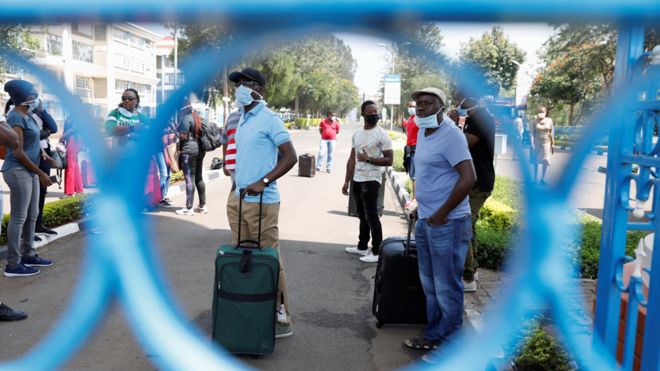 Like people around the world, Rachel Gachuna is extremely worried about catching coronavirus. But she is just as fearful about being locked up in a Kenyan quarantine centre.

If the single mother of one-year-old twins is to believe those already held at some of these government-assigned facilities, living conditions are not much better than at a prison.

“The toilets are just messy, dirty… even the cleaners who clean the toilets once a day complain how messy the toilets,” one woman in quarantine told the BBC.

“It’s because there is no water, so people are touching the same taps when you want to wash your hands, if there is even water… it’s just a mess.”

Rachel Gachuna
I try to be careful. When I get into the house, I have to take a shower before I touch my kids”

People who arrived in Kenya from countries affected by the virus before it closed its borders and those found to have been in contact with a coronavirus patient have been sent to these centres for 14 days.

However, the quarantine period has been extended twice for everyone at centres where someone has shown symptoms of the virus – and they have had to keep paying the bills.

There have been also complaints that social distancing is impossible at some centres because of overcrowding.

“You pray to God that it never happens because I honestly do not know what I would do,” Ms Gachuna told the BBC.

She is now on leave after first choosing to work from her home in the capital, Nairobi – even though the city’s residents are able to go out during the day.

To protect her family from infection, she only goes out to the shops when essential – and would rather not go out at all.

Kenyans may now have to wear face masks in public and buses are carrying fewer passengers, but social distancing can be difficult.

“I try to be careful. When I get into the house, I have to take a shower before I touch my kids. You can’t guarantee what your clothes have picked from outside,” she said.

She has also let go of one her nannies, who came in to help look after the twins during the week, because she was worried that her use of public transport would leave the family vulnerable to infection.

And her fears were heightened last week after dozens of people attempted to storm out of an isolation centre at Kenyatta University in Nairobi, citing unbearable conditions.

“First on our inability to pay and secondly because it does not make any scientific sense for our continued stay at the centre,” Simon Mugambi, one of the would-be escapees, said.

Others spoke of their psychological and mental anguish after the government extended their stay beyond 14 days.

By the end of March, the government had more than 50 quarantine facilities at hotels, hostels at schools and universities, which cost between $20 (£16) and $100 a night.

Some of these have now closed – but at least five are subject to a third period of quarantine. Out of 2,336 people put into quarantine, 425 remain there.

Some have fared better than others.

A Kenya Airways pilot who arrived from Dubai on 24 March, told the BBC the airline was paying the hotel bill for him and his crew – and had offered them counselling sessions.

Being confined for so long away from one’s family was mentally tough, said the pilot, who did not want to be named.

‘Lives being put at risk’

A group of human rights organisations, Kelin, has raised concerns over the conditions and lack of information being given to those in quarantine.

Kenya’s health ministry has said it is aware of the inconvenience, but maintains the practice is being done in the interest of protecting the public as some of those quarantined have tested positive for Covid-19, the respiratory illness caused by coronavirus.

Patrick Amoth, who is in charge of public health at the ministry, also pointed to five centres when a second extension was announced where people “did not maintain optimal social distance and instead had close contact and interactions”.

The head of Kenyatta National Hospital, the country’s largest public referral hospital that falls under the health ministry, also criticised the behaviour of some of those in quarantine.

“They are becoming so hostile even to the workers; even some of my workers have had to be physically abused,” Evanson Kamuri said.

“They are putting their lives at stake, the least you can do as Kenyans is to give them some little, basic support and even show some level of etiquette,” the doctor said.

But the extensions have, according to one person who posted a video from a quarantine centre at Lenana School in Nairobi, meant that people have lost their jobs as well as being faced with crippling bills.

For Ms Gachuna, a logistics manager, this would be a disaster.

She’s already concerned about finances given that her firm that has now had to pause operations because of the coronavirus restrictions – and she has had to take on more child care herself.

The Kenya Airways pilot, who is now required to self-isolate at home for a further week, advises others to do everything to avoid being put in a mandatory quarantine facility.

“Quarantine is not a good place to be, so if you can avoid being there, just practise personal hygiene and social distancing to avoid all this trouble,” he said.