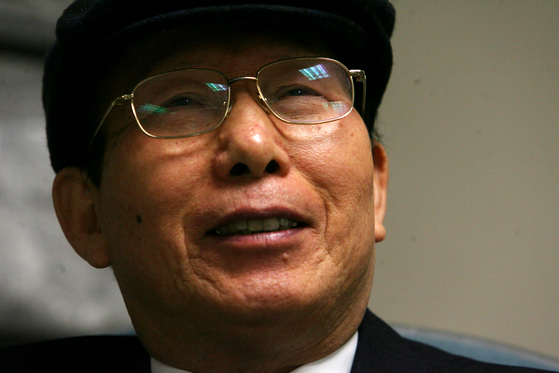 Former Korean ambassador to Somalia Kang Shin-sung recalls vividly the day when he waved the Korean flag with all his might in front of the Italian Embassy in Somali capital Mogadishu in 1991, with a group of North Korean diplomats.

“We were all there, South Koreans and North Koreans, waving the flag of South Korea,” said Kang. “It was a moment of life or death for all of us, and in such a moment, people forget about the ideological differences.”

Kang spoke with the JoongAng Ilbo earlier this week about his experiences of escaping the heavy fighting in Mogadishu in January 1991, the scene of which has become a motion picture released in the theaters last week.

The film “Escape from Mogadishu” tells the story of a group of South Korean and North Korean diplomats dodging the bullets of an expanding strife in Somalia, finding shelter together and getting on a flight out of the city with the help of the Italian government. A scene from the movie ″Escape from Mogadishu″ depicting the escape of South Korean and North Korean diplomats out of the Somali city during its civil war in 1991. [LOTTE ENTERTAINMENT]

But not all that has been depicted in the movie is true to the experiences of Kang and diplomats of the divided peninsula. The JoongAng Ilbo sat down with Kang recently to hear his story again, years after the paper ran a short report on the incident on Jan. 24, 1991.

It was Jan. 9, 1991, when Kang, 54 at the time, made his way to Mogadishu International Airport with seven other staff members of the South Korean Embassy in Somalia.

The ongoing civil war in the nation had turned most of Mogadishu to rubble. Armed antigovernment groups had raided homes, embassies and government buildings, and the sound of distant gunshots filled the streets.

It was at the airport that Kang met Kim Yong-su, the 55-year-old North Korean ambassador to Somalia, and 13 other staff members from the North’s embassy and their relatives.

Kang suggested that Kim’s party join his as they catch a flight out of the airport, but during some confusion at the airport both parties ended up being stranded without knowledge on when the next flight out would be.

“It was too dangerous to wait at the airport because it was a key location being fought over between the warring factions in Somalia,” Kang said. “My team decided to get back to the diplomatic residence and wait there, since we had some six local police officers still protecting it. When I asked Kim what he was going to do, he said that the North Korean Embassy has already been raided eight times, and that they don’t know how to fend for themselves if another attack takes place.”

Kang suggested that Kim and the other North Korean diplomats and their families stay with him at his home.

Next thing they knew, they were cooking dinner together at Kang’s residence.

“The North Koreans brought vegetables they had grown at their embassy compound, and rice they had with them,” Kang said. “We cooked and shared the meal together.”

When Kang was asked whether he had, at any point, second thoughts about taking in the North Korean diplomats under the roof of South Korea’s diplomatic residence, he said, “There wasn’t a moment to think about such things. It was all about trying to make it out of there safely, together.” Back in real life, Kang and Kim then contacted other embassies in Mogadishu which they thought may be able to help them.

Kim got in touch with the Egyptian Embassy, which was able to communicate on their behalf about their situation to the North Korean Embassy and South Korean consulate in Cairo.

Kang got in touch with the Italian Embassy, which said it could procure a flight out of Mogadishu for them — but only for the South Koreans. Italy didn’t have diplomatic relations with North Korea at the time.

“They said that they could help procure a warplane that can take some seven to eight people at once — enough for just the South Koreans,” Kang said. “I protested to the Italian ambassador, saying I cannot leave these North Korean people behind. It has to be all or nothing.”

In the end, the Italian government was able to procure an additional plane to get both Korean groups out of Mogadishu.

In the movie, actor Kim Yoon-seok, who plays Kang, asks Heo Joon-ho, who plays Kim, if he’d like to escape to South Korea. Kang said this never happened in real life.

The next move for the two parties was to get everyone safely to the Italian Embassy, where they would stay until their flight out of Mogadishu.

The group, altogether some 20 people, got into four different cars in the afternoon of Jan. 10. It was only a 10-minute ride to the Italian Embassy, but the embassy, located close to the residential palace of the president of Somalia, was nearer to the center of heavy fighting.

As they passed the central bank building in the downtown area of the city, they were hit by a score of bullets. The government forces had mistaken them as a rebel group. A scene from movie ″Escape from Mogadishu″ [LOTTE ENTERTAINMENT]

Taking an abrupt turn to avoid the bullets, the four vehicles took a different route and at last were able to reach the Italian Embassy. It was only after arriving at the embassy that they realized that one of the drivers, a North Korean diplomat surnamed Park, had been shot. He died soon after reaching the embassy. His wife was with him at the time.

“The Italian Embassy didn’t open up their gates immediately, because they had heightened security over the ongoing conflict in the city,” Kang said. “We all ran out of our cars and desperately waved the flag of South Korea to show them we were not a rebel group.”

In the movie, the actors wave a white flag — but Kang says it was actually the Korean flag that they waved together.

Park was buried at the Italian diplomatic residence. The Koreans spent two days together, until their rescue date on Jan. 12.

“We saw some 100 Somalians running towards us, trying to get onto the plane,” Kang said. “Soon all of us were swept in the crowd, some of us fell, but somehow, we all made it onto the planes.”

In two hours, they landed in Mombasa, Kenya.

As soon as they landed, Kang said, Kim came up to him to say goodbye.

“He said thanks for everything, but it’s time to say goodbye,” Kang said.

Kang mentioned that he has an accommodation ready in Kenya and suggested they stay there together until each return home.

Kim did not take up the offer.

“I realized then, that perhaps if it becomes known that North Korean diplomats received any kind of assistance from South Korea even after the escape from Somalia, it might not go well for them in Pyongyang,” Kang said.

It’s been 30 years since then, but Kang often recalls the escape from time to time, especially the people with whom he spent some of the most desperate hours.

“I would have visited Kim already had it not been for the divide between the two nations,” Kang said.

Kang, 84 this year, had been posted to Chile and then Hawaii following his post in Somalia. He retired in 1997 and wrote a novel based on his experiences of the escape out of Somalia, which was published in 2006. The report on Kang’s escape from Somalia in January 1991 in the JoongAng Ilbo. [JOONGANG ILBO] A photo taken by Kang during his posting to Somalia from 1988 to 1991 shows a local market. [KANG SHIN-SUNG]

Can Yemen Maintain Its Territorial Integrity?