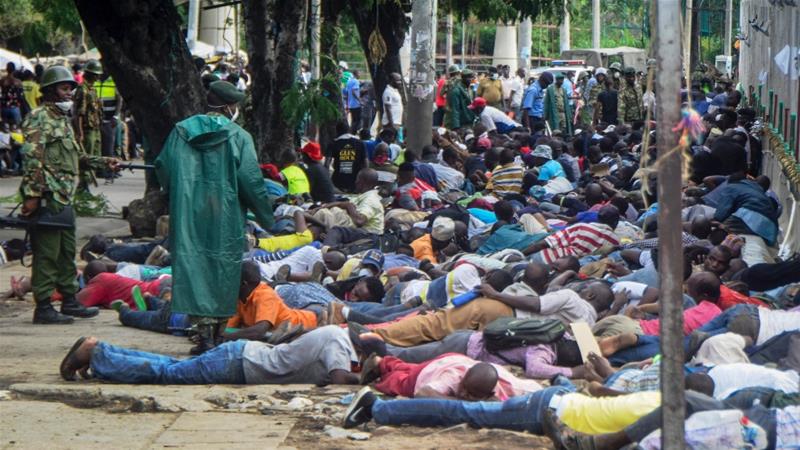 True death toll is presumed to be higher: an untold number of others have died because of the curfew itself and the fear prompted by police batons and bullets

The coronavirus hasn’t devastated Kenya yet. Its ripple effects, however, have proved deadlier here than the virus itself.

Police have killed at least 12 people while enforcing a dusk-to-dawn curfew that began more than two weeks ago, making Kenya’s lockdown one of the deadliest in the world. But the true death toll is higher still: an untold number of others have died because of the curfew itself and the fear prompted by police batons and bullets.

That fear gripped Vidia Nduku Mati and her husband as the delivery date for their baby approached at the end of March. They prayed that she wouldn’t go into labour in the overnight hours – but fate wouldn’t cooperate. It was the deep of night, well into curfew when the pain became unbearable

First, the midwife refused to come, saying she feared the policemen in their rural community who a day earlier had beaten even the people who raced inside their homes, Vidia’s husband recalled.

Their last resort to get to a hospital, a motorcycle taxi driver named Festus Nzuki, also declined, even though he was a close friend and could hear the pain in her voice over the phone. Police had beaten his mother-in-law simply for sitting outside her house – they were merciless to her in plain sight of her children, Nzuki said.

The couple resolved to wait until curfew lifted, but then Vidia’s water broke, and blood gushed out instead.

“It was the longest wait of my life,” said Mati Nyamai, Vidia’s husband. “By the time Festus got us to the hospital in the morning, she was bleeding so much, she was drowning in blood.”

While human rights groups and police oversight agencies collect and verify reports of those killed directly by police during curfew enforcement – a number that is already higher than the country’s Covid-19 death toll of 10 – more, like Vidia and her unborn child, are dying uncounted.

“At least one a night since curfew began,” said Wilfred Olal, who coordinates a network of social justice centres in slums across Kenya that is trying to keep track of curfew-related deaths since the measure was put into place 19 days ago. “To be honest, we’ve lost count. It’s dozens. There are many more.”

The Kenyan government’s Independent Policing Oversight Authority says it has recorded 35 “watertight” cases of police brutality related to curfew enforcement, 12 of which resulted in death.

“It is spreading all over this country,” said Jonathan Lompodui, the body’s vice chairman.

The police’s national spokesman, Charles Owino, and the government’s spokesman, Cyrus Oguna, did not respond to requests for comment on the circumstances that led to Vidia’s death and on the documented police killings. Government officials have largely refrained from speaking publicly about the curfew crackdowns. President Uhuru Kenyatta briefly noted it in a news conference a day after the story of Yassin Moyo, a 13-year-old boy killed by police while on his own balcony, made headlines.

“I want to apologise to all Kenyans, maybe for some excesses that were conducted, or happened,” he said before moving on.

Tallies from independent groups point to a spike in incidents of police brutality on the first night of curfew, 27 March, and sustained cases in the nearly three weeks since.

Police brutality is common in Kenya’s slums and small towns, where corrupt officers act with impunity. Moyo’s father, Hussein Moyo Motte, said that despite the uproar over his son’s killing, he still sees the officer who shot him patrolling the street outside his house. The police did not respond to requests for comment on the officer’s status.

A national survey in 2018 found that most Kenyans believed the biggest risk to their lives was violence by police. Since the inception of Kenya’s police oversight body in 2011, less than 1 per cent of the cases it has pursued have resulted in convictions.

An Amnesty International report in 2017 said that of 177 reported cases of police killings in Africa, 122 of them were in Kenya. According to Amnesty, 624 Kenyans have been killed by police since 2007, including 49 already this year, with only 26 officers having been formally charged. Last year was the deadliest on record.

“The curfew is making the violence so much worse because now they can be killing in the name of corona,” Olal said. “They simply do not understand: You cannot fight corona with a baton and whip.”

To some victims, the curfew is just a new pretext for the violence they are used to. Francis Otieno and his brother, Ibrahim Onyango used to scavenge scrap metal to get by, and Otieno said they would frequently get beaten by the police. On the first weekend of the curfew, Onyango was walking home after dark when policemen caught him and clubbed him repeatedly on the head with batons, his brother said. Onyango died in a hospital the next day.

“These are things that happen here in the ghetto,” Otieno said. “There is nowhere to start for us to get justice, so it will be a waste of energy. All we want to do is to bury Ibra.”

Almost all of the incidents have taken place in Kenya’s most marginalized communities, where many aren’t literate and don’t have access to phones they could use to report the violence.

Cases like Onyango’s are not part of the police oversight body’s official tally. Poor people in slums and small towns have for years turned to networks of human rights activists like Olal to document the toll in their communities.

Lompodui acknowledged it was possible that many cases like Onyango’s wouldn’t come to the attention of his police oversight body without the help of activists. It doesn’t help that many of the agency’s employees are working from home and Kenya’s courts remain closed because of the coronavirus.

Even in their attempts to help, police have triggered events that led to deaths and injuries. Last week, for instance, a food donation was organised at a police station in Kibera, a sprawling slum in the capital, Nairobi. But instead of creating an orderly distribution for the thousands who gathered there, the food was placed on the ground, and a stampede ensued, killing two and injuring many more.

“They made it so that getting the food depended on how strong you were,” Roselyn Amboka said in an interview as she returned from a hospital, her legs swollen from being trampled on.

Near the border with Somalia, police intercepted a bus they deemed to be breaching travel and social distancing restrictions and put the 40-plus occupants, including 16 children, in quarantine in a government building.