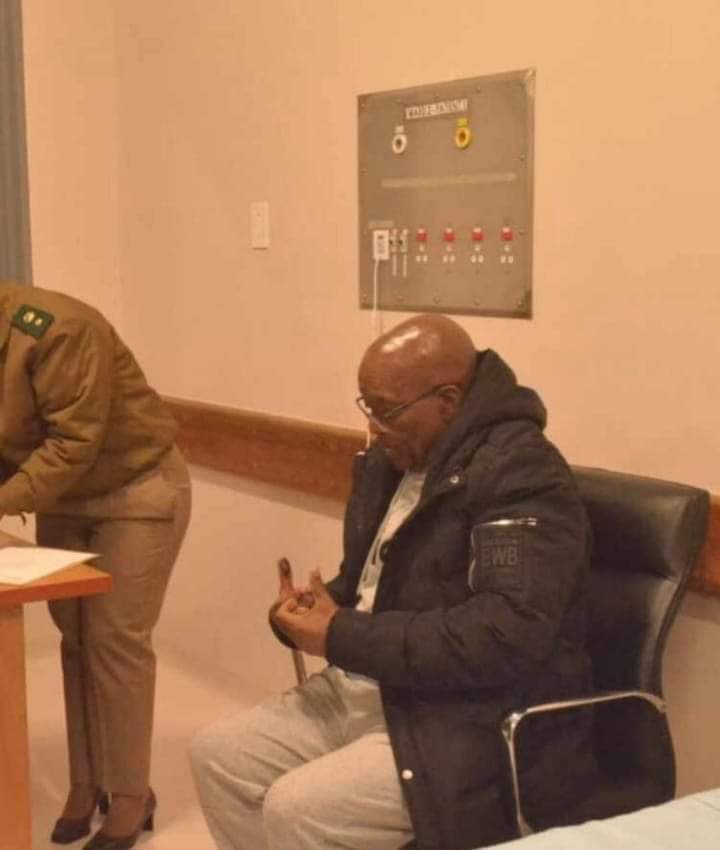 Pictures of former South African president Jacob Zuma in prison have been leaked. The president, who handed himself over to police just before midnight on 7 July 2021 started his 15-month jail term at Estcourt Correctional prison.

uma’s privacy. In the pictures, he can be seen having his fingerprints taken, and also in another picture he sits face down with his thumb fingers inked with fingerprint ink. Jacob Zuma looked dejected despite earlier reports that he was in high spirits.

Justice and Correctional Services Minister, Ronald Lamola says former president Jacob Zuma will be eligible for parole after serving a quarter of his 15-month jail sentence.

Zuma will also be in isolation at the Estcourt Correctional Facility in KwaZulu-Natal for the next 14 days.

Jacob Zuma will be spending the first 14 days of his 15-month jail term in isolation due to Cvid-19 protocol. Justice and Correctional Services Minister Ronald Lamola added “We can confirm that former president Jacob Zuma was admitted into this facility in the early hours of this morning in compliance with the Constitutional Court order, this is not a moment of celebration, it is a moment of restraint and to be human,” he said.

Somber scenes were seen at his Nkandla home as it seemed to have been abandoned. The usual sites of hundreds of people which had become familiar were nowhere to be seen. The only thing remaining is a tent belonging to the MKV who had been camping there for a month but are now gone.