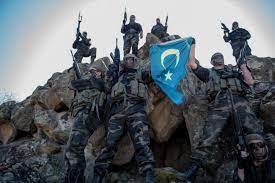 East Turkestan Islamic Movement militant outfit threatens to stoke instability in Xinjiang after the US withdrawal from Afghanistan
by Salman Rafi Sheikh July 6, 2021

As the US accelerates its withdrawal from Afghanistan, China is worried about the instability to come.

In May, after a series of explosions in Kabul that killed 60 people including several schoolgirls, China’s Foreign Ministry spokeswoman Hua Chunying said America’s “abrupt” withdrawal was a factor in the violence.

Hua said the US needed to withdraw its troops “in a responsible manner” that avoids “inflicting more turmoil and suffering on the Afghan people.”

What she didn’t say, however, is what China fears the most about America’s troop withdrawal from Afghanistan: a revival of the fundamentalist East Turkestan Islamic Movement (ETIM) and its cross-border agitation and terrorism in China’s volatile Xinjiang region.

The ETIM, also known as the Turkistan Islamic Movement, is an ethnic Uighur militant group active in Afghanistan that has long sought to achieve independence for Xinjiang, which it envisions as a future “East Turkestan.”

The ETIM is also active in Syria’s civil war, where battle-hardened fighters have largely been grouped in Idlib and other northern regions. The United Nations has categorized the group as a “terror organization” since 2002.

Curiously, the former Donald Trump administration removed ETIM from America’s terror list in November 2020, saying at the time there was “no credible evidence” that ETIM still exists.

As the Taliban surges north in the wake of America’s troop withdrawal, it seems likely only a matter of time before the militant group overruns Kabul and its US-backed government, and establishes in its place a new “Islamic Emirate”, as it has repeatedly said it aims to do.

A Taliban takeover, analysts and observers believe, will open new space for groups like ETIM to recruit and radicalize Uighur youth, many of whom are already reportedly deeply disaffected by reports of Beijing’s Uighur “vocational camps” and authoritarian control of Muslim religious practices in Xinjiang.

For Beijing, however, the concern is not merely the spread of radical ideas among Uighur Muslims in neighboring Afghanistan. Rather, it is the threat a resurgence of extremism could pose to its strategic Belt and Road Initiative in the region, not least in Pakistan.

While the departure of US and NATO forces from neighboring Afghanistan is no doubt broadly welcomed by China, it also puts Beijing in a new strategic quandary – one that could make or break its BRI ambitions in the region.

To be sure, Beijing’s concerns about the ETIM in Afghanistan are not simply an exaggerated threat assessment to justify its authoritarian control of Uighurs in Xinjiang. In 2008, China’s Ministry of Public Security released a list of eight “terrorists” linked to ETIM with detailed charges against them, including threats to bomb the 2008 Beijing Olympics.

Despite the Trump administration’s denials, a recent United Nations Security Council report confirmed that ETIM not only exists and operates in Afghanistan but is also pursuing a “transnational agenda.”

According to the report, ETIM is among the “foremost” foreign terror groups operating in Afghanistan. The report says ETIM is situated mainly in Badakhshan, Kunduz and Takhar provinces and that Abdul Haq (Memet Amin Memet) remains the group’s leader.

The report goes on to say approximately 500 ETIM fighters operate in the north and northeast of Afghanistan, primarily in Raghistan and Warduj districts, Badakhshan, with financing based in Raghistan. Those northern areas connect with China through the narrow Wakhan Corridor, a potential passageway for Xinjiang-bound militants.

The UN report says ETIM collaborates with Lashkar-e-Islam and Tehrik-e-Taliban Pakistan, two banned Pakistani militant groups. It also said ETIM “has a transnational agenda to target Xinjiang, China, and the China-Pakistan Economic Corridor, as well as Chitral, Pakistan, which poses a threat to China, Pakistan and other regional States.”

Beijing has been pursuing a multi-faceted strategy to counter ETIM’s threat. While it has stressed a “responsible” withdrawal of US and NATO forces meaning a withdrawal that comes only after a political settlement is reached between Kabul and the Taliban, it has equally established relations with both warring sides.

While it has offered Kabul to train and advise its security forces, with reports in the Chinese media even indicating a possible deployment of Chinese forces in Afghanistan to prevent ETIM fighters from using the Wakhan corridor in Badakhshan province to cross unchecked into Xinjiang, it has also offered Taliban “development” in exchange for peace.

Beijing’s definition of peace, however, does not simply refer to the absence of civil war in Afghanistan. Rather, it also and mainly stresses the importance of not providing any safe heavens to ETIM fighters. Observers and analysts, however, doubt that the Taliban will force the ETIM out of existence at Beijing’s request.

On the contrary, the Taliban are going to need as many fighters on its side as possible to win its war for Kabul. President Ashraf Ghani vowed this week to launch a “counter-offensive” amid widespread reports of national troops defecting to the Taliban as it advances northward in the wake of the US troop withdrawal.

That likely means that the ETIM will not only be one of the chief beneficiaries of the Taliban’s war to establish an Islamic Emirate in Afghanistan but will also likely be able to carve out the space to continue its pro-Uighur campaign in Xinjiang.

Its position will also be strengthened by the presence of other jihadi groups, including al Qaeda and the Islamic State in Afghanistan (IS-K), both of which sympathize with the so-called “Uighur cause.”

In 2017, the Iraq-Syria based ISIS released a video of Chinese Uighur Muslims threatening to return home and “shed blood like rivers.” The 30-minute video shows Uighur fighters in training interspersed with images from inside the ethnic minority’s Xinjiang homeland, replete with scenes of Chinese police on patrol.

The fact that the US has already withdrawn ETIM from its terror organization list means that the militant outfit has likely had the space to grow its logistical and financial resources, manpower and weaponry.

Growing indications that Turkey – home to a sizable Uighur population including thousands who have fled persecution in Xinjiang – may play a direct military and diplomatic role in Afghanistan after America’s withdrawal also raises risks for China.

Turkey’s now well-known use of jihadi fighters in Syria for essentially geopolitical objectives will make its future presence in Afghanistan unsettling for Beijing.

Turkey, now pursuing pan-Islamist “neo-Ottoman” ambitions, has been championing the Uighurs cause for some time. When China’s Foreign Minister Wang Yi visited Turkey in March 2021, about a thousand Uighur protesters were allowed to gather in Istanbul to protest his diplomatic presence.

In that sense, China is not only facing a few hundred ETIM fighters in Afghanistan. Rather, it could face a combined force of thousands of jihadis backed by state and non-state actors with direct territorial access to Xinjiang via Afghanistan.

Analysts suggest China’s position is also compromised by the lack of any significant on-the-ground human intelligence networks and an ability to intercept or pre-empt anti-China terrorist formations in Afghanistan.

Recent reports indicate Beijing is trying to get a grip on the situation: In December 2020, a Chinese spy ring was arrested in Afghanistan, according to media reports.

Although Beijing denied the allegation, Ahmad Zia Saraj, the chief of Afghanistan’s National Directorate Security, confirmed to the Afghan Parliament that the arrests had indeed been made. What information the reputed spies may have gathered and transmitted to Beijing before their apprehensions, however, is unknown.