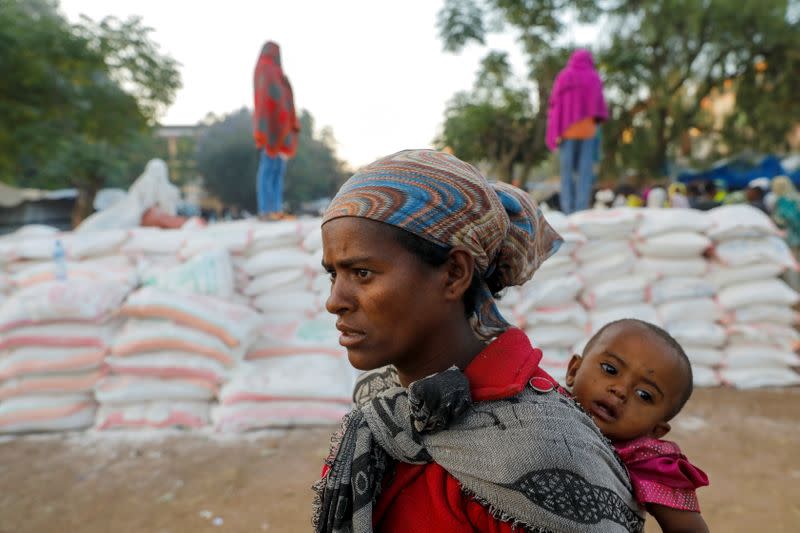 Tens of thousands of refugees who fled the conflict in Ethiopia’s northern Tigray region are facing security risks and assistance shortfalls in camps in Sudan, according to a group of Western embassies and donors who have criticised the UN-led relief operation in a letter obtained by The New Humanitarian.

Addressed to the UN’s refugee agency, UNHCR, the three-page letter dated 17 June accuses the organisation of a lack of leadership and failing to act on prior donor warnings about gaps and delays in providing aid at the camps.

Aid workers familiar with the relatively well-funded response said the unusual letter – which follows another that donors sent to UNHCR in January – is evidence of months of frustration, and that it seems to have prompted a new urgency in the UN’s operation in the camps. The signatories called on UNHCR to make immediate improvements ahead of the upcoming rainy season

The letter charges that almost eight months into the response, refugees lack safe and dignified sanitation facilities; are without sufficient access to health services; and are short of cooking fuel and grinding mills needed to process food provisions.

The alleged lack of services has left camp residents at risk of trafficking, armed recruitment, and sexual violence, according to the letter, which describes the situation as at a stage where “the safety, security and dignity of refugees is at severe risk, and lives may be lost.”

Assadullah Nasrullah, a spokesperson for UNHCR in Sudan, said the agency has responded to the donors’ complaints – acknowledging challenges, explaining progress it says it has made, and providing information on plans to strengthen the response.

“We take all feedback and criticism of our work extremely seriously, and we are sparing no effort to help and protect refugees, including under difficult circumstances,” Nasrullah said, describing the influx of refugees since November as “massive and unexpected”.

Two senior aid officials working in the camps who spoke to The New Humanitarian over the past two weeks described the response as the worst they had seen in their careers. Both officials – and a third who also spoke to The New Humanitarian – said they were aware of the donor letter, though none were willing to be named in order to preserve working relationships with UNHCR and the donors.

‘There was a rush to find somewhere’

The donors that signed the letter include ambassadors from Canada, Germany, Norway, and Switzerland, and officials from the UK, US, and EU. They say the situation in the camps has reached a “critical stage” with the onset of rains.

Around 4,000 of the 10,000 shelters in two official camps where refugees are living were damaged in recent weeks after severe storms, according to UNHCR.

Nasrullah said the government was responsible for choosing the camp sites despite weather risks that were pointed out by the agency. Recent winds and rains were heavier than anticipated, Nasrullah added, most likely due to worsening climate change.

Aid officials told The New Humanitarian that UNHCR should have done more to convince the government to select alternative camp sites, and that weather mitigation measures should have been completed several months ago.

“There was a rush to find somewhere,” said one of the three aid officials who spoke to The New Humanitarian about their work on the response. “[UNHCR] accepted very quickly despite partners challenging them.”

Around 40,000 refugees live in the two camps – previously used by Ethiopians fleeing famine in the 1980s. Another 8,500 are sheltering in transit centres close to the border with Ethiopia. 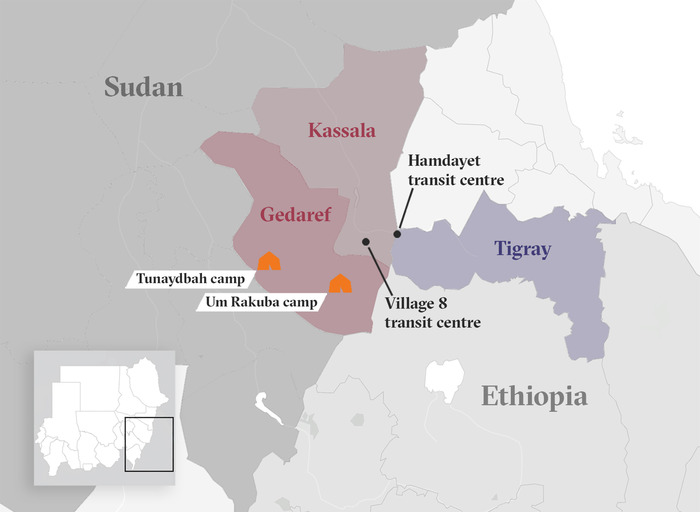 The Sudanese government has granted asylum to those who crossed the border, while UNHCR has played the leading role in setting up the camps, providing food, health care, clean water, and sanitation along with around 40 other local government bodies, NGOs, and UN agencies.

After the Ethiopian government announced a ceasefire in Tigray last week – following heavy battlefield losses to the rebel Tigray Defence Forces (TDF) – some aid officials said camp residents may choose to leave the sites and return home in the coming weeks.

But officials also warned that new refugee flows are possible as the TDF seek to recapture parts of western Tigray, which border eastern Sudan and were annexed by militia from the neighbouring Amhara region during the eight month conflict.

‘It was a little bit of a circus’

The refugee response is well-funded for what is considered a relatively small-scale operation. Donor countries – including those that signed the letter – have so far provided nearly half of the $182 million requested by UN agencies for 2021.

The relief effort has proved less challenging than the one inside Tigray, where aid groups have been blocked from delivering assistance by the Ethiopian government and its allies – as well as by general security concerns.

Hundreds of thousands of people currently face famine in Tigray, and nearly two million have been displaced from their homes. Sexual violence has been used as a “weapon of war”, according to UN officials.

“The pace of refugee arrivals from the Tigray region had not been seen over the last two decades in eastern Sudan.”

Nasrullah, the UNHCR spokesperson, said the agency’s operation in eastern Sudan has faced several logistical difficulties in organising a response in a remote part of the country with little infrastructure.

“The situation at the onset of the emergency was really challenging,” Nasrullah said. “The pace of refugee arrivals from the Tigray region had not been seen over the last two decades in eastern Sudan.”

The first of the three unnamed aid officials said UNHCR is not the only organisation that should be blamed for problems that have arisen. They described the initial phases of the response as “chaotic” with dozens of humanitarian agencies failing to coordinate properly.

“It wasn’t clear who would help which parts of which camps, with which assistance, on which days or weeks,” they said. “It was a little bit of a circus.”

The donor letter lays the blame more squarely on UNHCR, which it charges has failed to ensure the presence of experienced, senior staff members in the camps and transit sites.

The staffing problems have led to delays in camp construction and in the implementation of basic services, according to the second unnamed aid official who spoke with The New Humanitarian. They said senior UNHCR staff should be on site to make management decisions and ensure contractors deliver projects on time.

Inadequate conditions have caused some camp residents to return to Tigray, the letter states, while others have headed north to Libya, where migrants often suffer serious abuses en route to Europe.

Though UNHCR has protection teams on the ground, the first unnamed aid official who spoke with The New Humanitarian said those teams have focused their efforts on identifying vulnerable groups who need special services, while overlooking broader security issues like human smuggling.

On more than one occasion, the official said, lorries have turned up in the middle of the day to take people away from the camps towards what is presumed to be Libya. Despite the official raising the alarm there was “no response in terms of reducing these risks and threats,” they said.

Nasrullah said information campaigns to highlight the risks of human smuggling and trafficking are ongoing in the camps and in other parts of eastern Sudan, though he could not confirm if any refugees had attempted the journey to Europe via Libya.

The spokesperson said the agency had also set up different mechanisms to provide refugees with information on legal issues and other rights and obligations. Information and outreach campaigns have also been launched to prevent gender-based violence.

Still, the third aid official who spoke with The New Humanitarian about their experience working on the response described efforts to protect refugees as “really, really, really dire”. Faced with homelessness after recent storms, the official said, women – especially single mothers – have resorted to sex work to obtain shelter or earn cash.

The second aid official said communication with refugees has been poor from the outset. Refugees lacked instructions from UNHCR when crossing the border in November, and were then dropped off at a camp without proper infrastructure, they said.

There are also too few helpdesks and information points in the camps and transit centres that would help refugees know what to do if they need a certain service or have a problem or complaint about the response, the official added.

“I have never seen a humanitarian response with such little human dignity,” said the official, who leads an international aid organisation working in the camps. “It is shocking to see.”

Nasrallah said UNHCR has “significantly strengthened” its outreach efforts in the camps and transit centres in recent months through information and protection desks, and awareness raising posters with messages in Tigrinya, English, and Arabic. The spokesperson said UNHCR teams were present at the onset of the response to receive new arrivals.

The humanitarian situation is worse at transit sites close to the border, according to the second aid official. They said UNHCR discouraged aid groups from providing a “comprehensive response” at the sites because it wanted to relocate refugees to camps within 72 hours of their arrival.

But the relocations did not happen as quickly as UNHCR wanted, the official said, and have stopped altogether in recent months amid concerns from local authorities about the number of refugees in camps. Few aid groups are now left to help those at the border with most based in the camps, the nearest of which is 70 kilometres away.

UNHCR’s Nasrallah said the agency was “providing critical services” in the transit sites alongside its partners, and would continue to advocate for refugees to be relocated to camps away from the border.

Donor officials sent an earlier letter to UNHCR – also obtained by The New Humanitarian – on 31 January. The letter called for more experienced staff on the ground, improved services, and the need for flood mitigation planning in the camps.

UNHCR responded in a 22 March letter – seen by The New Humanitarian – detailing its efforts to ramp up water, sanitation, and hygiene services, launch flood preparedness plans, and mobilise protection experts from its regional office and headquarters.

But according to the June letter, the donors’ earlier suggestions “were not followed up”. It states that if problems are due to the Sudanese government, the embassies haven’t been told what advocacy messages would be useful to convey through their channels.

The June letter appeared to have “put rocket fuel into some of the agencies’ engines”, according to the third aid official who spoke about their experience in the camps. They described Tunaydbah camp as looking like a construction site, as work on roads and shelters picks up pace. “It’s a shame that hasn’t been the operational tempo up to now,” they said.

The second aid official said donors are “trying hard” to improve the response through letters and meetings with UNHCR, but called for more proactive mechanisms – including independent third party monitoring – to hold the agency and others accountable.

With more rains and winds expected in the coming months, UNHCR’s Nasrullah said the agency was digging drainage systems and rehabilitating some 60 kilometres of access roads leading to the camps.

He said the agency is also exploring ways to support the building of semi-permanent shelters, though construction efforts won’t commence until after the rainy season, when mud bricks have tim to properly dry.

Weather concerns are particularly acute at Tunaydbah camp, which is built on black cotton soil that doesn’t absorb water quickly. The site was opened in January after the first camp – Um Rakuba – reached capacity.

The aid officials who spoke to The New Humanitarian questioned whether donor money should be spent on expensive earthwork and construction projects to rectify unsuitable camp sites.

For now though, the officials said they were focused on addressing the threat of further storms. “If there are heavy rains and… the camps are flooded it will be a fiasco in terms of health and protection,” one said.