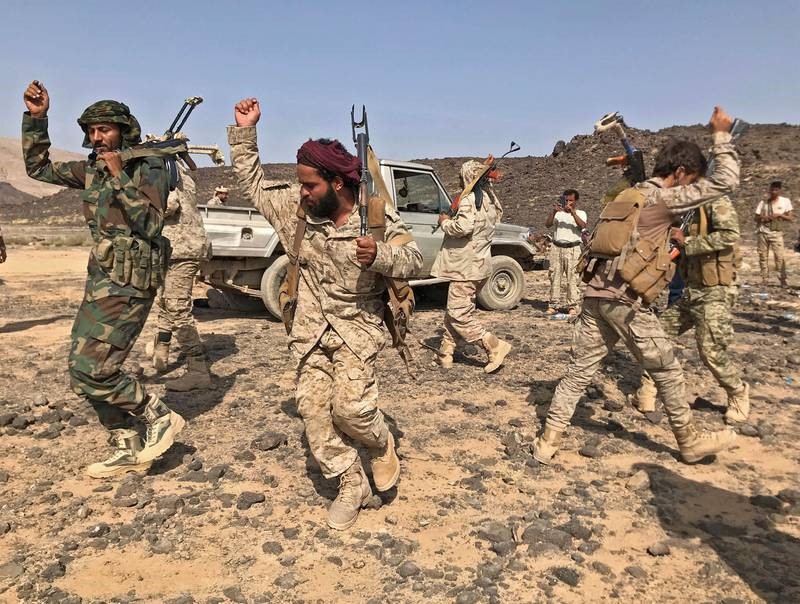 Fighters loyal to Yemen’s government are pictured on the frontline facing Iran-backed Houthi rebels in the country’s north-eastern province of Marib on September 27. Sixty-seven rebels and pro-government troops have been killed in fighting for Marib. All photos by AFP

Scores of people were killed in fighting between pro-government forces and Iran-backed Houthi militias in Marib governorate in northern Yemen this week.

“More than 120 Houthi rebels were killed in fierce clashes in the mountainous terrain between the districts of Harib and Al Jobah, southern Marib in the last couple of days” Mohammed Al Qardaie, a tribal leader fighting alongside the Yemen government, told The National on Tuesday.

The ancient city of Marib is a vital transport hub in the country’s rugged north and serves as a gateway to other government-held provinces.

“Since the beginning of this week our forces, backed by the coalition jets, thwarted several attacks launched by Houthi rebels trying to control the highway that links Safer oil fields in Marib with the oil-rich province of Shabwa in south-east Yemen,” Mr Al Qardaie said.

“Their eyes are on [the] Safer oil fields ” Mr Al Qardaie said.

Last week, the insurgents managed to advance in the districts of Harib and Al Abdiyia, southern Marib and took control of the oil-rich districts of Bayhan and Osailan in Shabwa, south-east Yemen.

The new escalation in southern Marib has worsened the humanitarian situation in the province, which has 139 camps for internally displaced people, inhabited by nearly two million people.

“The situation is really bad in here, the clashes are getting closer to the city, which the rebels surround from three directions,” an IDP who fled the war in Al Jawf province told The National.

“The desert road that links Marib with Hadramawt is the only way left for us to flee the city if the Houthis take control over it,” he said.

As fighting rages, hundreds of families attempting to flee the flashpoints between the districts of Al Jobah and Harib in southern Marib are trapped while trying to reach new displacement camps in central Marib.

“The situation in Marib’s southern territory is extremely disastrous. Imagine, whole villages were forcibly displaced by Houthi rebels in Harib and the southern outskirts of Al Jobah,” Saeed Moneef, an IDP who fled his village in Al Jobah to Marib city, told The National.

“Hundreds of families are still stuck in the flashpoints of southern Marib, they fled their homes as the battle intensified in their villages but they couldn’t make it to Marib city – they are sleeping under trees,” Mr Moneef said.

“These families lack the basic needs for life such as food, fresh water and shelter, while many of them have elderly people who are the most vulnerable amid this tragic situation,” he said.

Abdulhakim Al Qaisi, director of the Social Affairs office in Marib, told The National on Tuesday that the Houthi rebels have maintained a tightly controlled siege around villages in Al Abdiyia district in southern Marib for more than a week.

“Many families in the villages of Al Abdiyia have been under a strict siege … the Houthi rebels didn’t allow the humanitarian teams to access these villages to provide the besieged families with lifesaving aid,” Mr Al Qaisi said.

“Most of those besieged in Al Abdiyia are women and children, the Houthi rebels didn’t allow them to flee their villages to put pressure on the young ones who still fight, along with the public resistance, to surrender,” Mr Al Qaisi said.

Houthi rebels have been pushing towards Marib since February despite the heavy losses they have been suffering around the oil-rich city. Saudi Arabian air strikes have caused particularly high Houthi casualties.

Marib is one of the most important strategic objectives for the Houthis because of its significance as the government’s last northern Yemeni stronghold.

Located near large reserves of oil and gas reserves, the city is connected to a road network linking several governorates.

Control of the city would give significant influence to the Houthis in any forthcoming conflict negotiations.

Profit at all cost: The sins of the tobacco industry in Africa