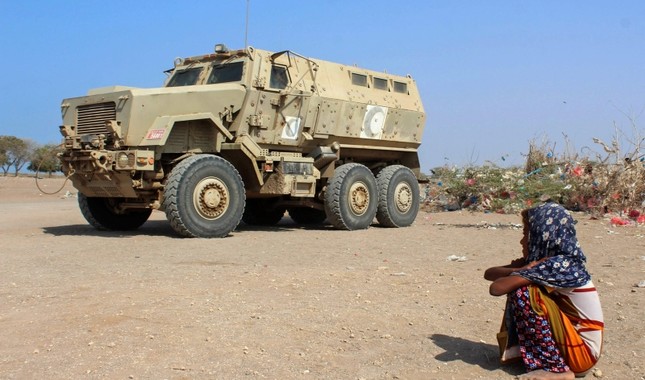 On Thursday, CNN, referring to footage filmed secretly using a mobile phone, reported that a cargo of heavy US weaponry has arrived at Aden port in southern Yemen from the Saudi port city of Jeddah. The move comes while over the past few months, there have been negotiations between the warring sides in Yemen over a peace deal. Last week, Rai al-Yaum newspaper revealed that secret talks were held between Yemen’s Ansarullah movement and Saudi Arabia in the Omani capital of Muscat with Pakistan and the UN mediation, indicating that Saudi Arabia is developing an interest to end Yemen war, now in its fifth year. But what is the goal behind heavy weapons transfer to southern Yemen by the Saudis?

Reversing the defeat in the Yemen war

Last week, the Saudi Arabian Crown Prince Mohammed bin Salman praised an agreement between the resigned President Abdrabbuh Mansour Hadi and the southern separatists as an “important step” towards the end of the war in the Arab country. But the revelations about the new weapons cargo unloaded in Aden show that the Saudi prince does not care much about peace in Yemen.

The ship carrying the cargo is named Bahri Hofuf. According to an investigation by CNN using the navigation data, the vessel’s last destination was the port of Jeddah on 17 September. Then it sailed to Sudan where it arrived a day later. After arrival in Sudan its GPS trackers were turned off, CNN reported. It was then observed in Aden at midnight on October 29.

Since the Saudi invasion of Yemen, Riyadh chased two objectives. First, securing its eastern borders and second gaining the ideological leadership of the Arab countries by installing puppet governments. Looking at the past six months, which is seen by the political analysts as the phase of Yemen war results, shows that Saudi Arabia compared to its ally UAE is the biggest loser of the five-year-long war. Yemeni attacks on Saudi oil giant Aramco in mid-September displayed Saudi Arabia’s weakness as the country not only failed to secure its eastern borders with Yemen but also sustained the most surprising attacks that crippled its oil production, though its skies are protected by the much- vaunted US-supplied Patriot air defenses. The fiasco also revealed to the Saudis a bitter truth: An effective puppet government in Yemen is almost unthinkable as Ansarullah revolutionary continues to gain strength and the separatists in the south do not recognize a Riyadh-backed government.

Saudi Arabia, facilitating negotiations between Hadi and the separatists, sought to steer clear of clashes between the two. It sealed a peace deal last week with the UAE and its southern loyalists represented by the Southern Transitional Council (STC) to share the power and thus allow for at least a symbolic presence of Hadi in the south.

Bin Salman told the press that the government of Mansour Hadi and the STC are brothers and the Saudi government does its best to de-conflict the brothers in Yemen. The Saudi leadership hopes that the new deal will rebuild the largely scattered ranks of the Arab allies for a new wave of confrontation with Ansarullah.

With Ansarullah attacks on Aramco, bin Salman’s strategic policy of selling Aramco shares has faced serious challenges, with many foreign bidders now stepping back from their earlier preparations to buy the shares. This made Saudi Arabia make a tactical retreat and negotiate with Ansarullah to provide a calm atmosphere assuring the bidders about the IPO offer. Since early November, Saudi Arabia started its moves to sell Aramco shares. Prince Mohammed is insisting on Aramco shares offer as the oil-reliant Arab kingdom grapples with an $ 80 billion budget deficit and seeks to diversify its income resources to cut reliance on oil.

After the Aramco attack, the US redeployed its troops to Saudi Arabia, increasing them to 3,000. It also added to already existing air defenses and other heavy weaponry. Bin Salman hopes to use the situation beside the talks with Ansarullah for faster selling of Aramco shares. But there yet to be enough willingness for the offer as he expects. Bin Salman is pressing many of the Saudi rich people to buy shares. So, Riyadh is buying time to surprise Ansarullah at the proper time.

After weeks of talks with the southern secessionists and Ansarullah, a new wave of attacks on Ansarullah as the leading party in the north by Saudi Arabia to reverse the earlier losses should be expected so than Riyadh can go to future Yemen negotiations with an upper hand