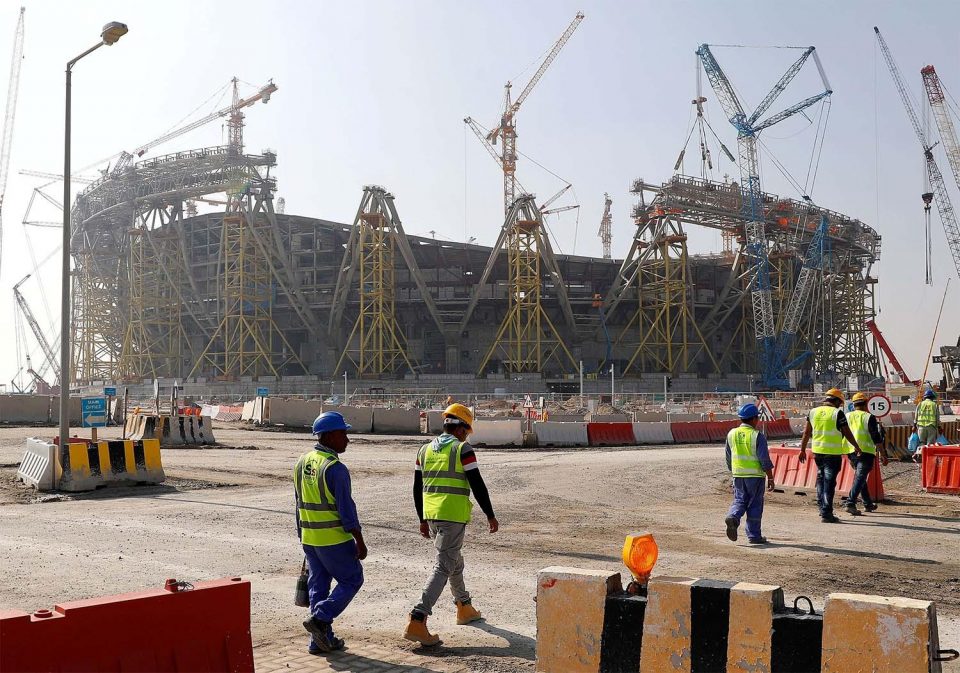 Migrant workers endangering their lives to build stadiums in Qatar during the pandemic
Gulf emirate has come under heavy criticism from human rights groups and international media for violating migrant workers’ basic rights and putting their lives at risk during coronavirus pandemic.
Friday 17/04/2020

LONDON – Qatari government’s claims of efforts to protect foreign workers from the novel coronavirus pandemic contradict human rights’ reports and labourers’ testimonies of mistreatment and abuse in the Gulf emirate.

Qatar has detected three more coronavirus cases among workers on World Cup stadiums, organisers said Thursday, bringing the number of infections among those involved in 2022 tournament construction to eight.

The Gulf nation has reported seven deaths from the COVID-19 disease and 4,103 cases in total, announcing the first infections in stadium workers on Wednesday.

Building work for the stadiums and infrastructure to stage the tournament has continued through the crisis even as non-essential retail has been halted and mosques, parks and restaurants have closed.

Observers say that the number of infected people may be much higher than what Qatari authorities have reported, given that a large number of workers do not report their illness, especially at the beginning of the pandemic when COVID-19 symptoms were still unclear, for fear of being dismissed and deported.

Qatar has a long been accused of migrant worker abuse and exploitation, which has sparked widespread international condemnation from civil society and the media in recent years.

“Many migrants are worried they will be deported if they test positive for COVID-19, so there is a fear that they will not report symptoms or go get tested, feeling compelled to work with the virus and imperiling their own health and that of others,” Elizabeth Frantz, a division director of the Open Society Foundations’ International Migration Initiative, told Foreign Policy on April 8.

Scores of migrant workers fear for their lives amid high risks of contamination due to the lack of social distancing measures in crowded accommodations, on constructions sites and crammed buses.

New York Times journalist Ben Hubbard said that Qatar has locked down tens of thousands of migrant workers in a crowded neighbourhood, raising fears it will become a coronavirus hotbed.

Qatari government said that the protection of workers, especially those living in the quarantine area, was central to the response following international media’s allegations.

But workers portrayed a different picture.

“The situation here is serious. I have been frequently speaking with workers who are in lockdown areas. Employers aren’t allowing people out to buy food, and companies are not providing food. We don’t have any rights to ask for support,” a Nepali migrant worker in Doha told Foreign Policy.

“There’s a high risk of transmission among workers. We don’t know whether people will get paid or not. We do not know whether we will be asked to leave the country or not. People do not have access to food,” Narendra said.

Human rights group Amnesty International said Wednesday that Qatar detained dozens of migrant workers and expelled them last month after telling them they were being taken to be tested for the COVID-19 virus.

One of the Nepalis who were detained and expelled by Qatar told the London-based rights group the prison was full of people.

“We were given one piece of bread each day, which was not enough. All the people were fed in a group, with food lying on plastic on the floor,” said the Nepali worker.

A coalition of 16 nongovernmental organizations and trade unions called on Qatari authorities to ensure that migrant workers receive adequate protection during the pandemic.

“Qatari authorities should ensure that migrant workers who are unable to work, either due to preventive quarantine or testing positive for COVID-19, continue to receive wages; provide public information to ensure that migrant workers, including domestic workers, do not face discrimination or stigma in relation to the COVID-19 virus; and in light of their acute vulnerability, ensure that domestic workers have access to timely and adequate protective measures and health care,” wrote the coalition in a letter on March 31 to Qatar’s prime minister and interior minister, Sheikh Khalid bin Khalifa bin Abdulaziz Al-Thani.

They argue that the 2022 World Cup is the most “bloody” event in the history of the most important football event in the world as 34 migrant workers have died building stadiums in Qatar.

Qatar’s image has also been tainted by corruption allegations for winning the bid to organise the World Cup.

The FBI has accused three senior FIFA officials of receiving bribes to vote in favour of Qatar, and to award the 2018 competition to Russia.

The US Department of Justice has accused both the late Nicolas Leoz (the then-president of CONMEBOL, South American football’s governing body) and Ricardo Teixeira (an ex-Brazil federation president) of taking money in exchange for their votes in favour of Qatar to host the 2022 World Cup.