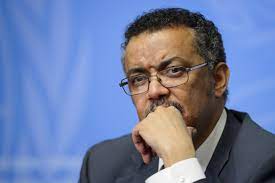 Acting on an initiative from the Biden Administration, by November 2022, conveniently at the onset of the next flu season in the northern hemisphere, the World Health Organization, barring a miracle, will impose an unprecedented top-down control over the national health regulations and measures of the entire planet. In what amounts to a stealth coup d’etat, WHO will get draconian new powers to override national sovereignty in 194 UN member countries, and to dictate their health measures with force of international law. It is sometimes referred to as the WHO Pandemic Treaty but it is far more. Worse, most of the WHO budget comes from private vaccine-tied foundations like the Gates Foundation or from Big Pharma, a massive conflict of interest.

Doing something with stealth means doing it in a secretive or concealed manner, to prevent it being widely known and possibly opposed. This applies to the proposal given by the Biden Administration to the Geneva WHO in January 18, 2022 according to official WHO documents. The WHO hid the details of the US “amendments” for almost three months, until 12 April, just a month before the relevant body of the WHO meets to approve the radical measures. Moreover, rather than the previous 18 month waiting time to become treaty in international law, only 6 months are used this time. This is a bum’s rush. The US proposal is backed by every EU country and in total 47 countries ensuring almost certain passage.

Ms Pace came to the Biden Administration from heading the Global Health Council, whose members include the most corrupt names in Big Pharma including Pfizer, Lilly, Merck, J&J, Abbott, Bill Gates-funded AVAC, to name a few. Her proposals for the radical transformation of WHO “pandemic” and epidemic powers, could easily have been written by Gates and Big Pharma.

Before we look at what the Loyce Pace “amendments” will do to empower the transformation of WHO into a global health dictatorship with unprecedented powers to overrule judgments of any national governments, one stealthy legal issue must be noted. By disguising a complete change in the 2005 WHO treaty powers as mere “amendments” to a ratified treaty, WHO claims, along with the Biden Administration, that the approval of the amendments requires no new ratification debate by member governments. This is stealth. With no national debate by elected representatives, the unelected WHO will become a global superpower over life and death in the future. Washington and WHO have deliberately restricted the process of public participation to ram this through.

As required, the WHO finally published the US “amendments.” It shows the deletions and as well the new additions. What the Biden Administration changes do is to transform a previously advisory role for the WHO to national governments on not only pandemic responses but also everything tied to national “health,” with an entirely new power to override national health agencies if the WHO Director General, now Tedros Adhanom, determines. The US Biden Administration and WHO have colluded to create an entirely new treaty which will shift all health decisions from a national or local level to Geneva, Switzerland and WHO.

Typical of the Washington amendments to the existing WHO Treaty is Article 9. The US change is to insert WHO “shall” and delete “may”: “If the State Party does not accept the offer of collaboration within 48 hours, WHO shall may…,. In the same article now deleted is “offer of collaboration by WHO, taking into account the views of the State Party concerned…” The views or judgment of say, Germany or India, or USA health authorities become irrelevant. WHO will be able to override national experts and dictate as international law its mandates for any and all future pandemics as well as even epidemics or even local health issues.

Moreover in the new proposed Article 12 on “Determination of a public health emergency of international concern, public health emergency of regional concern, or intermediate health alert,” WHO head–now Tedros in his new 5-year term–alone can decide to declare an emergency, even without agreement of the member state. The WHO head will then consult his relevant WHO “Emergency Committee” on Polio, Ebola, Bird Flu, COVID or whatever they declare to be a problem. In short this is a global dictatorship over citizen health by one of the most corrupt health bodies in the world. The members of a given WHO Emergency Committee are chosen under opaque procedures and typically, as in the current one on polio, many members are tied to the various Gates Foundation fronts like GAVI or CEPI. Yet the selection process is entirely opaque and internal to WHO.

Among other powers the new Pandemic Treaty will give Tedros and WHO the power to mandate vaccine passports and COVID jabs worldwide. They are working on the creation of a global vaccine passport/digital identity program. Under the new “Pandemic Treaty”, when people are harmed by the WHO’s health policies, there’s no accountability. The WHO has diplomatic immunity.

Former WHO senior employee and whistleblower, Astrid Stuckelberger, now a scientist at the Institute of Global Health of the Faculty of Medicine of the University of Geneva, noted, “if the new Pandemic Treaty is adopted by member states, “this means that the WHO’s Constitution (as per Article 9) will take precedence over each country’s constitution during natural disasters or pandemics. In other words, the WHO will be dictating to other countries, no longer making recommendations.”

The Director General of WHO would have the ultimate power under the new rules, to determine for example if say, Brazil or Germany or USA must impose a Shanghai-style pandemic lockdown or any other measures it decides. This is not good. Especially when the head of WHO, Tedros, from the Tigray region of Ethiopia, is a former member of the Politburo of the designated terrorist (then by Washington) Marxist organization, the Tigray People’s Liberation Front. He holds no medical degree, the first in WHO director-general history without such. He has a PhD in Community Health, definitely a vague field, hardly medical qualification for a global health czar. Among his published scientific papers are titles such as “The effects of dams on malaria transmission in Tigray Region.” He reportedly got his WHO job in 2017 via backing from Bill Gates, the largest private donor to WHO.

As Ethiopia Minister of Health in the Tigray-led dictatorship, Tedros was involved in a scandalous coverup of three major cholera outbreaks in the country in 2006, 2009 and 2011. An investigative report published by the Society for Disaster Medicine and Public Health found that during one major cholera outbreak, “Despite laboratory identification of V cholerae as the cause of the acute watery diarrhea (AWD), the Government of Ethiopia (Tedros) decided not to declare a “cholera outbreak” for fear of economic repercussions resulting from trade embargos and decreased tourism. Further, the government, in disregard of International Health Regulations (WHO), continually refused to declare a cholera epidemic and largely declined international assistance.”

As Ethiopian Health and later Foreign Minister Tedros was accused of systematic ethnic cleansing against rival tribes in the country, especially Amharas, denying opposition supporters World Bank and other food aid, as well as nepotism, diversion of international funds for hospital construction into political support for his minority party. Ironically this is the opposite of the new WHO law Tedros backs today. On 22 September 2021 Merkel’s Germany proposed Tedros for a further term without opposition.

A hint of what’s in store under the new rules was given by WHO’s largest donor (including his GAVI), the self-appointed “Globalist Everything Czar”, Bill Gates. On his April 22 blog entry, Gates proposes something amusingly with the acronym GERM — Global Epidemic Response and Mobilization—team. It would have a “permanent organization of experts who are fully paid and prepared to mount a coordinated response to a dangerous outbreak at any time.” He says his model is the Hollywood movie, Outbreak. “The team’s disease monitoring experts would look for potential outbreaks. Once it spots one, GERM should have the ability to declare an outbreak…” It would be coordinated by, of course, Tedros’ WHO: “The work would be coordinated by the WHO, the only group that can give it global credibility.”

A dystopian notion of what could take place is the ongoing fake “Avian Flu” epidemic, H5N1, that is causing tens of millions of chickens to be terminated worldwide if even one chick tests positive for the disease. The test is the same fraudulent PCR test used to detect COVID-19. Recently, Dr Robert Redfield, Trump’s head of CDC, gave an interview where he “predicted” that Bird Flu will jump to humans and be highly fatal in the coming “Great Pandemic,” for which COVID-19 was a mere warm-up. Redfield declared in a March 2022 interview, “I think we have to recognize – I’ve always said that I think the COVID pandemic was a wakeup call. I don’t believe it’s the great pandemic. I believe the great pandemic is still in the future, and that’s going to be a bird flu pandemic for man. It’s gonna have significant mortality in the 10-50% range. It’s gonna be trouble.” Under the new WHO dictatorial powers, WHO could declare a health emergency on such a fraud regardless of contrary evidence.

F. William Engdahl is strategic risk consultant and lecturer, he holds a degree in politics from Princeton University and is a best-selling author on oil and geopolitics, exclusively for the online magazine “New Eastern Outlook”.

In Somalia, business as usual is a bad idea for US interests- Elizabeth Shackelford