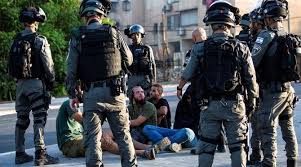 The Israeli security cabinet and Hamas have agreed on an Egyptian- brokered ceasefire, ending 11 days of war. Will it suffice to silence the voices and tensions within Israel? Why have violent clashes, lynchings, and unforeseen tensions erupted in the seemingly integrated, mixed Jewish and Arab Israeli communities across the country?

The United Nations refers to the West Bank, Gaza, and East Jerusalem as “Occupied Palestinian Territory ” – not “Territories” – in an effort to highlight the intended geographic continuity and unity of its people . The reality on the ground, however, stands in stark contrast with this definition: different political, social, and economic dynamics – exacerbated by the impossibility of the free movement of people (and goods) between parts of the territory – have contributed to a chasm in Palestinian society and unified identity. The lack of communication between everyday civilians in Gaza and those living in East Jerusalem or the West Bank often places foreign aid workers in the privileged, albeit odd, position of interacting with different areas and being asked by Palestinians “Tell me, how is life in Gaza (or the West Bank, or East Jerusalem)? “ Today, however, what has caught everyone ‘s attention is the sense of unity expressed by Palestinians across the Territory and the violence in the so-called integrated communities inside Israel. While, sadly, wars between the state of Israel and Gaza have become predictable and cyclical, the crack within Israel is unexpected and potentially has more long-lasting consequences. The reason for this shift has been brewing for some time now, and its roots are entrenched in structural changes within the Israeli and Palestinian societies.

Palestinians in Gaza and the West Bank

Crossing into Gaza from Eretz in Israel, the grim poverty is overwhelming, and it is a constant that only worsens in times of war. According to UNRWA (The United Nations Relief and Works Agency for Palestine Refugees in the Near East) , since the pandemic, poverty rates have peaked at 80 percent . Along the border, children and teenagers can be seen looking for scrap metal or pieces of cement, both considered by Israel as dual use materials (metal to build rockets and cement to build tunnels), making them scarce and of high value along the Strip. The extreme poverty in Gaza, particularly after Hamas rose to power in 2006 and thesubsequent 2007 blockade by Israel and Egypt, has significantly contributed to the disconnect between the population in the Strip and the West Bank.

The acrimonious relation between Hamas —which does not recognize the state of Israel— and Israel, which classifies it as a terrorist organization, is palpable at the border. After the Israeli checkpoint, a Palestinian Authority checkpoint ( hamza hamza ) acts as buffer before arriving at the Hamas checkpoint ( arba arba ).

The recently canceled elections, which were to be held on 22 May, showed that ninety-three percent of eligible voters across Gaza and the West Bank had registered — half of whom (aged eighteen to thirty-three)  have never voted . New political groups have emerged – particularly younger activists, who reject the political dominance of Fatah and Hamas. This may be a unifying element for Palestinians as youth across the board have seen their first chance to vote taken away.

While a poll carried out by the Palestinian Center for Policy and Survey Research found support for the parties was close – 38% for Hamas, compared to 34% for Fatah – predicting that Ismail Haniyeh would handily defeat Mahmoud Abbas in a presidential race, Hamas’ popularity has significantly decreased (according to some sources dropping to as low as 20 %). Civilians feel increasingly trapped by Israel along the borders and by Hamas’ rule within Gaza. Prominent young journalist, Asma Al Ghoul, eloquently expressed the emotions of many Gazans and youth when, after surviving the 2014 war (Operation Pillar of Defense as the IDF call it) she wrote: “… Let me tell you that the people you are killing have nothing to do with Hamas, they are women, children and men. Ordinary civilians and families… “. This sentiment has grown since then, particularly as the increased poverty has exposed the stark contrast between the way the Hamas hierarchy live – a number of them, such as Haniyeh, no longer live in Gaza – and the daily life of people in the Strip.

Akram Atallah, a columnist for the West Bank-based Al-Ayyam newspaper, who moved from Gaza to London in 2019, explains that Hamas uses its governmental and militant “duality” to its advantage. When faulted for not providing basic services, it claims to be a resistance group; when criticized for imposing taxes, it says it’s a legitimate government. Lastly, another central issue, deserving of the utmost attention, is the status of refugees. During an interview in Gaza, the owner of one of the few hotels left in the Strip was quick to clarify she did not come from a refugee family, and that hers had been in Gaza for centuries. The weight and perception this carries is significant and has to do with the very human feelings of dignity and belonging. This issue is easily understood if we look at the living conditions Palestinians are confined to in Lebanon, Jordan, and Syria.

Nonetheless, Palestinian lives in the West Bank are fragmented into disconnected islands that are controlled by over 600 military checkpoints , gates and roads exclusive to settlers from Israel (UNCTAD report 2020 ). Palestinians usually refer to these checkpoints in Hebrew, as מחסום, mahsom , instead of in Arabic, as حاجز, hajez .

The current crisis that is sweeping through the country has brought forth the radical changes that Israeli society has been undergoing for some time. As noted in the podcast Palestine, Israel and the New Right , different parts of society have emerged . Israel is no longer led by the predominantly lay Ashkenazi elite. Different parts of society are reaching out for the socio-political pie: the settlers (economic and religious ones), the ultra-orthodox, and third generation Arab-Israelis. Divisions and discontent within Israeli society were already visible in 2016 . A surveyby the Pew Research Center showed that these divisions could be found not only between Israeli Jews and the country’s Arab minority, but also among the religious subgroups that make up Israeli Jewry. Ironically, 40 percent of Israeli Jews indicated their own government was not making a sincere effort toward peace; the same share of Israeli Arabs held the same opinion about their own Palestinian leaders . Some analysts warn the ultra right-wing discourse, once relegated to marginal parts of society and politics, has now taken center stage, making the internal crisis potentially more divisive. Over the past decade, the narrative in mainstream media has also shifted. For instance, a 2015  TV advertfor Prime Minister Benjamin Netanyahu’s election campaign distinguished itself for its lack of diplomacy and humanity, featuring the PM as a babysitter after over 500 Palestinian children had died a few months prior in the 2014 Operation Pillar of Defense.

Even as the far-right is ascendant in Israeli society, at the same time we can see the ascendance of Palestinians from 1948, Palestinian citizens of Israel. Most of them descend from the Palestinians who remained in Israel after the 1948 Arab-Israeli war, automatically obtaining their citizenship rights. Israel’s Arab population also includes residents of East Jerusalem who refused to become Israeli citizens after Israel took control of the area in 1967. Arab Israelis account for roughly 20 percent of the total Israeli population and, though they enjoy the right to vote in Israel, they experience discrimination. For the most part, they live in a concentrated handful of Arab-majority cities, which also happen to be the poorest; while those who live in mixed communities tend to reside in mainly Arab neighborhoods. A de facto segregation applies to all aspects of daily life. Albeit outlawed, this kind of separation has been registered in hospital maternity rooms too.

This is the reason why Arab Israelis participating in the uprisings: they are angered both by the airstrikes against Palestinians in Gaza as well as their own experience living as second-class citizens . For the first time in nearly two decades, they are mass protesting from Acre in the north all the way through to Lod, Ramla and Rahat in the south, with tension spreading to over 23 towns and cities. Some Israelis worry the clashes between Jewish and Arab citizens will cause irreparable harm to the nation’s social fabric, or that they could even trigger a civil war.

Arab Israelis protesting in support of Palestinians in Gaza and Jerusalem have clashed against right-wing Jewish Israelis and police forces, leading to riots and looting. In some cases, groups of vigilante Jews marched through Arab areas, targeting shops and individuals with violence. For their part, some Arabs have attacked Jews passing through Arab neighborhoods.

There is the emergence of powerful voices of third generation Palestinian youth: highly educated, they speak perfect Hebrew and have integrated themselves in the medical field: today, nearly all pharmacies in Israel are Palestinian. Different subcultures are fighting each other, with a fracturing along political lines . A very vocal left is also emerging, although for the moment is it is still a minority.

A tipping point was reached. The high-level of dehumanization of Palestinians, that has infiltrated a substantial part of Israeli society, is leading to numerous race riots, while the invisible barrier between the 1948 Palestinians and East Jerusalem’s stateless Palestinians has crumbled.

Though most of the world’s attention is focused on the ceasefire that came into force in the first hours of today, halting the war between Hamas in Gaza and the IDF, with its tremendous (and disproportionate) cost of civilian lives , the real societal and political shift is happening within Israel

Northern Kenya Ten Years After Katiba: Anniversary of a Funeral