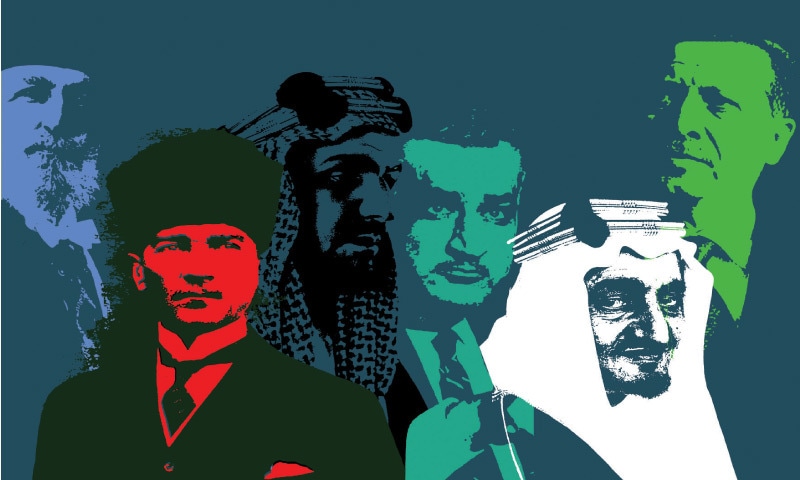 In 1924, a year after declaring Turkey a republic and becoming its president, the former commander in the army of the shrinking Ottoman Empire, and a hero of World War I, Mustafa Kemal Pasha, abolished the centuries-old office of the caliphate and drove the last Ottoman caliph into exile. With this act, not only did Kemal launch his ambitious republican and secularisation project in Turkey, but he also triggered a race between Muslim leaders and monarchs to become recognised as the new leaders of the Muslim world.

Various Muslim groups around the world had agitated against European powers who were at war with the Ottomans during World War I. But after the defeat of the Ottomans, many Muslim political leaders and intellectuals hailed Kemal’s coming into power and saw him as a modern redeemer of Islam.

The British historian E. Kedourie, in a 1963 essay for the Journal of the Royal Asiatic Society of Great Britain, writes that Kemal was conscious of the fact that the idea of the caliphate was deeply embedded in the minds of Muslims. According to Kedourie, at one point, Kemal actually wanted to name himself as the new caliph. But since this would have contradicted and complicated his secularisation and republican project, he didn’t. However, Kedourie adds that Kemal then offered a much weakened version of the caliphate to Shaikh Ahmad al-Sanusi, an Arab head of a Sufi order, as long as he would remain outside Turkey.

This suggests that, despite launching an aggressive project to secularise Turkey, Kemal was still interested in retaining the country’s role as the ‘spiritual and political leader of the Muslim world.’ But after the abolition of the Ottoman caliphate, two contenders rushed in to claim the title. King Fuad of Egypt (that was still being ruled by the British) and the ‘Wahabi’ Arab tribal leader, Ibn Saud, who, with the help of the British, had conquered former Ottoman territories in what would become Saudi Arabia in 1932.

In 1926, Fuad organised an international Muslim conference in Cairo. It was not attended by Saud. Weeks later, Saud held a similar conference in Makkah. Turkey did not attend any of the two events and neither did the Shia-majority Iran.

Challenged by Turkey’s ‘neo-Ottomanism’, Saudi Arabia is struggling to revive King Faisal’s reformist ideas. The goal, as before, is the leadership of the Sunni Muslim world

In 1947, a much smaller player emerged in this race. It called itself, Pakistan. It was founded in August 1947 by Muhammad Ali Jinnah’s Muslim League. The party’s roots lay in an evolving idea which emerged in the 19th century. It took a ‘modernist’ approach to understanding Islam. This then progressed as a Muslim nationalism which was remoulded as Pakistani nationalism. According to the French political scientist Christophe Jaffrelot, this approach relegated Islamic rituals to the private sphere and brought into public space Islam as a political-cultural identity marker.

Inspired by the writings of Muslim reformers such as Sir Syed Ahmad Khan and the poet and philosopher Muhammad Iqbal, Jinnah and his party imagined a sovereign Muslim-majority country untainted by, what Iqbal had lamented, ‘tribalism’ inherent in Arabian polities. Iqbal pleaded for a faith understood and articulated according to the needs of modern times.

Jinnah and his colleagues needed to greatly trim the pan-Islamic aspects of Muslim nationalism to root it more in the realities of South-Asian Muslims. But this did not deter Pakistan’s first prime minister, Liaquat Ali Khan, from declaring that Pakistan was a lot more than just another Muslim country. According to M. Razvi, in the 1981 issue of the Journal of Pakistan Institute of International Affairs, Pakistan held a World Muslim Conference in 1951 in Karachi. During the event, PM Liaquat highlighted the importance of retaining pan-Islamic ideas.

This did not please Saudi Arabia, which suspected that Pakistan was trying to undermine the kingdom’s (self-appointed) role as the leader of the post-colonial Muslim world. But this role was dramatically snatched away by Gamal Abdel Nasser, the Egyptian president who came to power through a coup in 1952. Charismatic and articulate, Nasser was hailed as a hero by Muslims around the world when, in 1956, he managed to keep at bay an attack by British and Israeli forces on Egypt.

With his displays of ‘Arab socialism’ and a modernity suited to the needs of the evolving Muslim polities, Nasser mocked Saudi Arabia of being retrogressive and rigid. For a decade after 1956, Nasser’s Egypt was the undisputed leader of the Muslim world, inspiring large numbers of Muslims in Arab and non-Arab regions alike.

Stung by Nasser’s status in this context, and also by his criticism of Saudi Arabia, the Saudi monarch King Faisal (who came to the throne in 1964) unfolded a hectic modernisation process in Saudi Arabia. However, Nasser’s mystique and influence began to rapidly recede when Egyptian and Syrian forces were decimated by their Israeli counterparts in 1967.

In 1970, Nasser passed away, and Saudi Arabia once again rushed in to pick up the status of the leader of the Muslim world. A windfall of profits made during (and because of) the 1973 oil crisis enhanced the influence of what became known as the ‘petro-dollar’. And Saudi Arabia had the most.

Faisal cleverly used these to subdue (and win over) Nasser’s successor Anwar Sadat. Faisal was also aware of the ambitions of Pakistani PM Z.A. Bhutto, who fancied himself as a champion of the modern Muslim world. But since Pakistan had lost a war in 1971 and its economy was weak, Faisal brought Pakistan fully into the ever-expanding Saudi orbit.

By the 1980s, flush with petro-dollars and with a surge in the popularity of ‘political Islam’ in Muslim countries, Saudi political and religious influence witnessed a manifold increase. It was only challenged by the radical Shia theocracy in Iran. Both countries fought a brutal war of influence through sectarian proxies in countries such as Pakistan and Lebanon.

However, in the new century, events such as the Arab Spring, the fall of dictatorships in Libya, Iraq and Tunisia, civil wars in Afghanistan, Somalia, Syria and Yemen, the emergence of multiple violent anti-state Islamist outfits in most Muslim countries, along with the retreat of the US and the rise of China, began to make various Muslim countries reconsider their strategic priorities and even reinvent their ideological character to strike new alliances.

Turkey that had dropped out of the game of Muslim leadership decades ago, entered the fray again and is trying to lure non-Arab Muslim regions to break away from the Saudi orbit. It is an orbit that had already begun to decay.

This is one reason why the new Saudi monarchs are trying to revive King Faisal’s initial reformist ideas. Whereas the conservative aspect of Saudi ideology was castigated by Nasser’s Egypt in the past, this time it is being challenged by Erdogan’s ‘neo-Ottomanism’, which is critical of Saudi Arabia for squandering the influence it had enjoyed for decades as the leader of the Muslim world. Turkey sees itself as a more natural candidate for this role. This title once again is up for grabs.

The article first appeared in DAWN