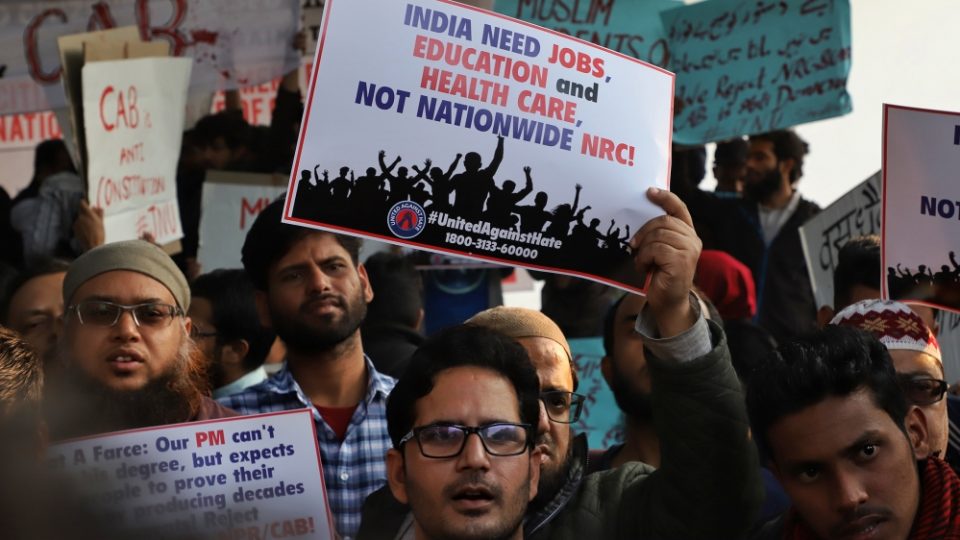 by Bilal Kuchay
CORRECTION: An earlier version of the article had inadvertently said the citizenship bill was passed in lower House of parliament. However, MPs had voted on the introduction of the Citizenship Amendment Bill, 2019.

The bill, which seeks to amend the 1955 citizenship law, aims to give citizenship to “persecuted” minorities – Hindus, Sikhs, Buddhists, Jains, Parsis and Christians – from Bangladesh, Afghanistan and Pakistan, but excludes Muslims.

After it is passed by the lower chamber of India’s parliament, the bill will go to the upper House, where the ruling Hindu nationalist Bharatiya Janata Party (BJP) lacks a majority.

Opposition parties say the bill is discriminatory as it singles out Muslims in an officially secular nation of 1.3 billion people. Muslims form nearly 15 percent of the population.

Critics point out that the move is part of a Hindu supremacist agenda pushed by the government of Prime Minister Narendra Modi since it came to power nearly six years ago.

“Hence the exclusionary element of religion in CAB,” he said. “The political business model of the BJP is to keep India on a permanent boil, raising the communal temperatures high during elections.”

Last month, Minister of Home Affairs Amit Shah, a close confidant of Modi, announced that the country will begin the exercise of counting all its citizens to weed out undocumented immigrants from neighbouring countries.

A similar exercise called the National Register of Citizens (NRC) was carried out in the northeast state of Assam where nearly two million people were left off the citizens’ list in August.

Shah has in the past called Bangladeshi immigrants as “termites” and “infiltrators” and a threat to national security.

His party has vehemently opposed the arrival of Rohingya refugees and threatened to deport them to Myanmar despite the Muslim minority facing ethnic cleansing back home.

What is Citizenship Amendment Bill?

The CAB, first introduced in Parliament in July 2016, seeks to amend the Citizenship Act 1955 by making religion a basis for citizenship. The previous law did not make religion an eligibility criterion to become a citizen.

The bill was passed in the Lok Sabha in January this year, but could not be taken up in the Upper House, following protests in the northeastern states and resistance from the opposition.

The new bill cleared by the Cabinet last week, made some exemptions for the northeastern states, which have protested against the move, saying it will encourage tens of thousands of Hindus from Bangladesh to migrate to India.

As per the new draft law, the undocumented immigrants must have resided in India in the last one year and for at least six years in total to qualify for citizenship while the 1955 law prescribes 12 years’ residency as a qualification.

The major criticism of the bill has been that it prevents Muslims from seeking citizenship, something similar to US President Donald Trump‘s Muslim ban under which Muslims from few countries were banned from seeking asylum.

Legal experts argue that it violates Article 14 of the constitution, which guarantees the right to equality.

Faizan Mustafa, an expert on constitutional law, termed the bill “very regressive” and a violation of the constitution.

“We don’t have our citizenship based on religion,” said Mustafa, the vice chancellor of NALSAR University of Law in Hyderabad.

“If Indian government, through this bill, wants to give citizenship to persecuted minorities in the neighbouring countries, how can it exclude the Rohingya of Myanmar who are far more persecuted than any other group in the neighbourhood,” he said.

“Similarly, how can we exclude Ahmediyas and Shia from Pakistan and Bangladesh and Hazaras from Afghanistan.” 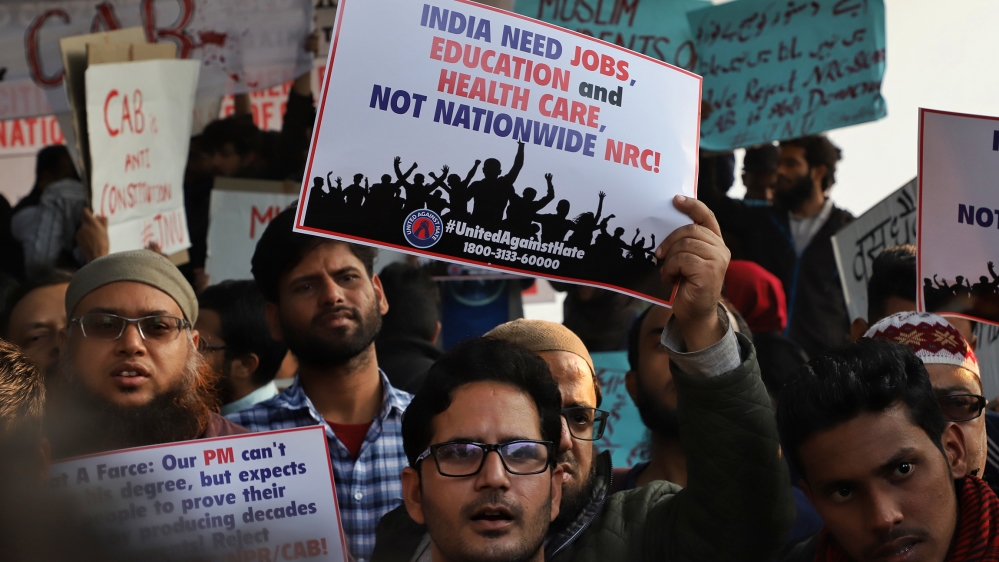 A large section of people and organisations in the northeast have opposed the bill, saying it will nullify the provisions of the Assam Accord of 1985, which fixed March 24, 1971, as the cut-off date for deportation of all undocumented immigrants irrespective of religion.

Home minister Shah has assured that people in the northeast, home to a large number of tribal population – will be exempted from purview of the bill, but that has failed to assuage their fears.

“People in the northeast are concerned about the bill because they feel it will change the demographic composition of their states,” Sanjoy Hazarika, director of the Commonwealth Human Rights Initiative, told Al Jazeera.

BJP rejected the outcome of the process in Assam as a sizable section of those left out were apparently Hindus. No official figures are out yet.

“The motive behind CAB is to actually legitimise the citizenship of all those non-Muslims who may be declared as illegal immigrants as per the NRC,” claims Mustafa. 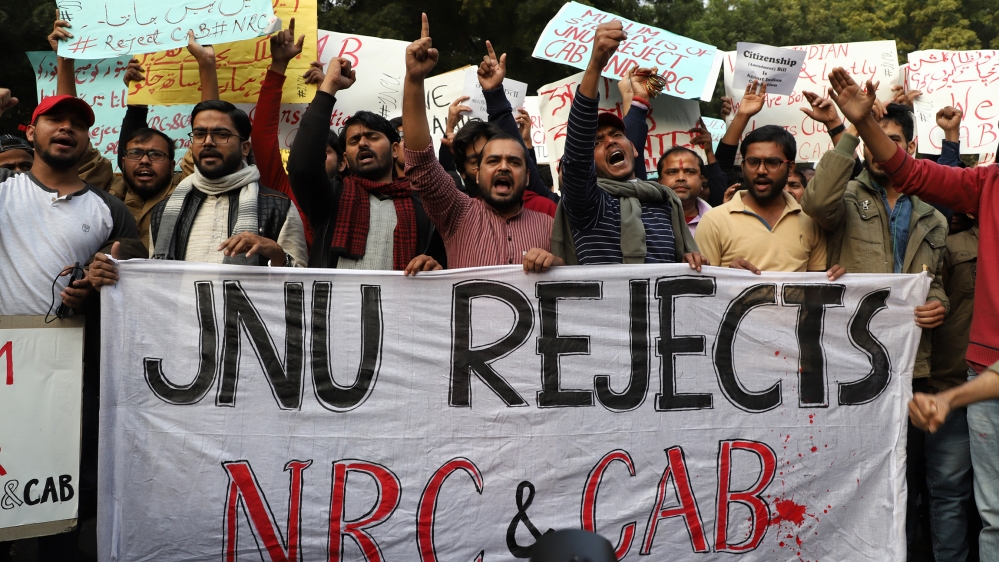 The government, however, maintains that the bill aims to grant citizenship to minorities who have faced religious persecution in the neighbouring Muslim-majority countries.

“The argument that this bill is discriminatory cannot apply as the issue is not about the Indian citizens,” BJP spokesperson Nalin Kohli told Al Jazeera. “The Bill is for Hindu, Sikh, Buddhist, Jain, Parsi and Christian minority communities who because of partition could not come to India and suffered persecution in their own countries.”

“Regarding Muslims, there are countries that were formed exclusively for them,” he said.

When asked about other persecuted Ahmediyas and Rohingya, Nalin Kohli said: “India is not looking to be inundated by those who are already citizens of the neighbouring countries.”