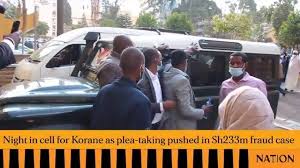 Garissa Governor Ali Korane and four county government officials will spend Monday night at the EACC cells in Nairobi ahead of their arraignment on Tuesday in a Sh233 million embezzlement case.

Their plea-taking was slated for Monday but it aborted after the Ethics and Anti-Corruption Commission (EACC) produced the suspects in court late in the afternoon.

Mr Korane and the others had presented themselves to the EACC at Integrity Centre in Nairobi earlier in the day for processing in readiness for their court appearance.

However, the exercise took more than five hours as the commission drove them to Milimani at 2.30pm, only to find there was neither a court to record the plea-taking nor a space to accommodate them.

The governor and his co-accused remained at the court premises for two hours, likely hoping they could be charged and be freed on bail.

Later, the EACC police officers drove them back to the Integrity Centre police station where they were detained ahead of the court appearance over a World Bank-funded project.

More than 100 people accompanied Governor Korane to the EACC headquarters and also to the court station, to where anti-graft police drove him in a Land Rover.

His rowdy supporters shielded him from the media and physically pushed photojournalists away, leading to chaotic scenes.

They also blocked the windscreen of the car that was transporting the governor to ensure journalists did not catch a sight of him.

Governor Korane remained in the EACC car while the hostile supporters surrounded it, shouting and chanting.

The governor will likely be the sixth county boss to lose access to his office for being implicated in graft, if a landmark judgment that the Director of Public Prosecution has been citing in corruption cases is applied.

The judgment by Justice Mumbi Ngugi, though criticised by some legal practitioners, has since seen five governors and a host of county governments’ officials barred from their offices.

The money at the centre of the storm was meant for building Qorahay market, re-carpeting Garissa Township roads and constructing a storm water drainage and pedestrian walkways.

DPP Noordin Haji ordered the accused’s prosecution following investigations by the EACC into the alleged misappropriation of money given under the Kenya Urban Support Programme (KUSP).

Mr Haji noted that the money given to Garissa was not used for the intended purposes.

It is believed the funds were diverted between February and September 2019, with the governor accused of facilitating the crime.