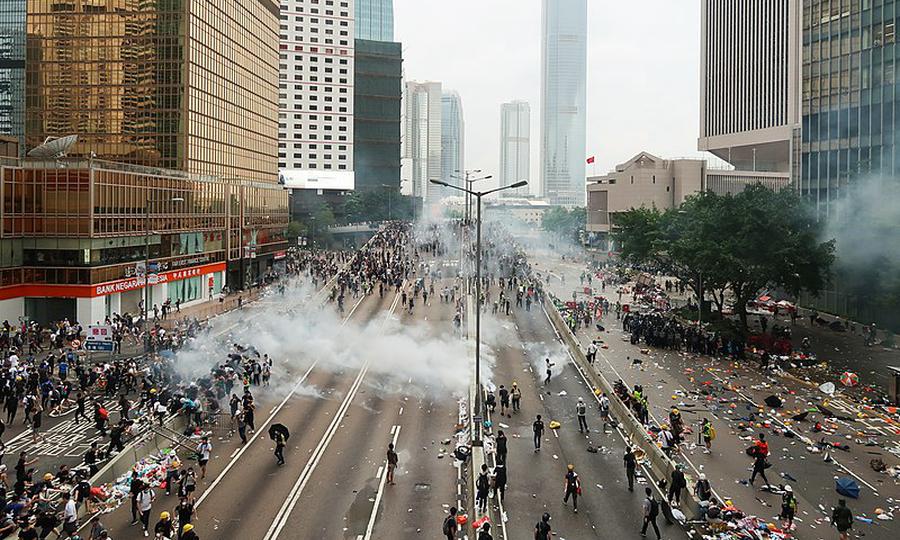 Will it be another turbulent year for the territory? There are three key things to watch

No one could have envisaged that a love story that ended in murder in Taipei in February 2018 would trigger the worst-ever maelstrom to engulf Hong Kong and alter the course of the city’s politics for good.

Nor could Carrie Lam have ever imagined that her ingenuity in using the case – a Hongkonger who strangled his girlfriend and fled back to the city but could not be rendered to Taiwan to stand trial – as a pretext for ramming through new legislation allowing extradition to not only Taiwan but also mainland China would forsake all her political capital and even her career as the top leader of the territory.

As the unrest seethes for the sixth straight month in the former British colony, the local government has, in this otherwise festive period, canceled the traditional New Year’s Eve fireworks gala in Victoria Harbor and other extravaganzas and urged people to instead stay indoors, while mustering constables to patrol and lockdown streets and protest hotspots to keep troublemakers at bay. But not too many are bothered, since the protest-weary city is in no mood for celebrations anyway, with many agonizing about another eventful year ahead.

Will Hong Kong hurtle from one turbulent year to another? What is in store for 2020? There are three things to watch.

A majority of the seats in the city’s legislature will be up for grabs in a citywide, high-stakes poll to be held in September 2020.

The pro-Beijing bloc has to erase the ignominy of the crushing rout in November’s district council election when it lost the monopoly of positions to the pan-democratic camp as most of its incumbent councilors were booted out. This is because Hongkongers’ uproar against the now-retracted extradition bill and alleged police brutality turned into votes for the opposition.

Embattled Beijing loyalists will have to fight a treacherous battle in the LegCo election to defend their majority, under the imperative from up north that the legislature must remain pliant to endorse bills tabled by the government.

The opposition, meanwhile, is set to clinch another neat win if the poll is to be held right away, and analysts say the camp as a whole may indeed garner a higher voter turnout as unlike selecting district councilors who mainly deal with livelihood issues, the LegCo election is laden with politics. And for the first time in the territory’s history, pan-dems may even grab more than 35 of the 70 seats to effectively put a straitjacket on the government with their vetoing power.

What remains to be seen is how the protracted political crisis will evolve or be defused in the new year, and if more voters will be galvanized to strengthen the base of the opposition should the government continue to shun the common demands from protesters – ranging from universal suffrage to probing police brutality.

The outcome of the LegCo election will be consequential for Beijing’s rumored fresh bid to enact Article 23 (national security) of the Basic Law, the city’s constitutional document, and that is why Beijing and its subordinates in the city are getting antsy. A two-thirds majority is needed once a major bill is put to a vote at the legislature.

The legislation of this particular article, which outlaws treason, secession, sedition and subversion against the central authorities, theft of state secrets, as well as foreign political organizations conducting activities and establishing ties with local entities, was deferred after a failed attempt in 2003 that drove half a million people into the streets and led to the early departure of the city’s first post-colonial leader.

Local papers cite pro-establishment politicos as saying that Beijing had already mandated the article to be passed by the end of 2020 provided that its loyalists could retain the majority inside the Legco chamber, as Beijing rejigs its policies to quell the unrest.

These reports claim that Chinese President Xi Jinping had handed down his latest decree to Carrie Lam, Hong Kong’s beleaguered chief executive, to enact Article 23 before the end of her tenure, when the latter was summoned for a duty visit to Beijing earlier this month.

The need for such legislation is exigent to thwart the meddling of the West in Hong Kong amid Beijing’s steady diet of such allegations since the outbreak of the protests. Furthermore, top cadres are said to believe that when the situation in the city had already hit rock bottom, there would be no need to wait for a more “ripe” time but should enact the article once and for all.

Also, Lam is unlikely to seek another term beyond 2022, making her an ideal leader “with nothing to lose” to press ahead with such an unpopular task when any leader counting on a popular mandate would skulk away from the job. Lam was praised for her “iron-fisted resolve and loyalty” by Xi when the latter was briefed in Zhongnanhai.

As the least popular leader Hong Kong has ever seen, Lam’s days in office are numbered. She is loathed by residents and blamed by Beijing loyalists for their electoral defeats.

She may bow out as Tung Chee-hwa did: He offered to step down in March 2005, citing the debilitating impact of heavy work on his health, after a public dress-down by Chinese leaders, less than two years after the failure to pass Article 23.

The reason for Lam not being sacked immediately is that Beijing is having a hard time anointing a replacement, as not many loyalists are willing to take on the Herculean challenge of addressing the mess. Still, a few names have been tipped, including Norman Chan, the recently retired chief of the Hong Kong Monetary Authority, as well as Henry Tang, former chief secretary for administration.

The Financial Times revealed in October that Beijing may let Lam go by March, when an “interim” leader could be installed who would only serve the remainder of her term. Both Beijing and the city’s government have vehemently denied having such a plan, which is precisely how they responded when rumors were rife about Tung’s departure back in 2003.