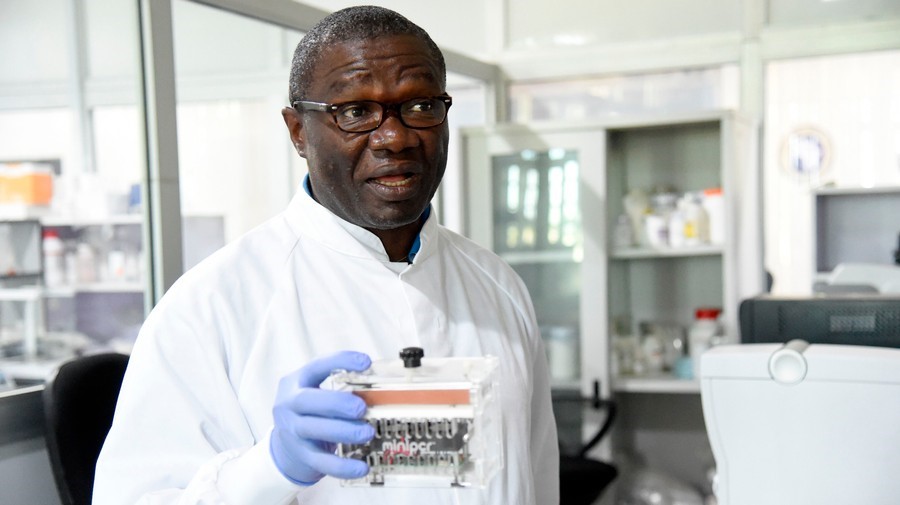 In southwestern Nigeria’s Osun state, five hours drive from Lagos, Dr Christian Happi runs The African Centre of Excellence for Genomics of Infectious Diseases (ACEGID), and it is here that his team of researchers have developed a DNA-based vaccine candidate against COVID-19.

Colonial-era policies and global health gatekeepers have made it nigh-on impossible for doctors and scientists on the continent to take their vaccines to clinical trials.
by Hannah Ritchie

Happi, a Cameroonian, is an internationally acclaimed geneticist who trained at Harvard. In 2014, he played a pivotal role in quashing an outbreak of Ebola in Nigeria, and he was the first to sequence coronavirus samples in sub-Saharan Africa, before later identifying the arrival of the so-called “South African variant” in Nigeria.

During pre-clinical evaluation and animal testing, the vaccine ACEGID developed, Happi claimed, showed 90 percent efficacy in treating multiple strains of COVID-19 circulating on the continent, but despite those results, it has not been able to secure either public or private funding to take the vaccine to human clinical trials.

“We’ve submitted proposals and we still don’t have a response,” Happi told VICE World News over the phone. “If we were able to produce a vaccine on the continent, the issue of access would have been far less overwhelming, but African countries don’t want to invest and who else is going to come in and invest?”

Africa has the lowest vaccination rate of any continent, with less than 2% of all COVID-19 vaccines administered worldwide. So far, 42 African countries have joined the COVAX vaccine-sharing scheme designed to provide doses to low and middle-income nations.

Scientists VICE World News spoke with all agreed that had a vaccine been developed on the continent, the severe access challenges plaguing African nations could have been avoided.

Instead, the current system relies on foreign donors, and modelling predicts that most of Sub-Saharan Africa won’t achieve mass COVID-19 immunisation until at least 2024. A reality some public health experts say amounts to “vaccine apartheid.”

“I know donors have committed money to vaccines further along, but it doesn’t make sense to ignore [ACEGID’s vaccine] because it denies Africa the opportunity to set up the infrastructure for future vaccine development on other diseases,” Happi said.

Africa represents over 16 percent of the global population, and Sub-Saharan Africa is where 70 percent of pathogens with pandemic potential emerge, yet the continent is home to less than 0.1 percent of vaccine production facilities.

The lack of funding for medical research and development from governments across the continent is a recurring problem facing scientists, with the continent’s expenditure on research hovering around 0.5 percent of GDP, far behind the global average of 2.2 percent.

Investment in healthcare is also lacking, with 25 governments in sub-Saharan Africa spending less than 5 percent of total GDP on healthcare, compared with 9 percent in OECD countries.

As a result, the majority of healthcare systems across Africa are almost entirely dependent on international donors to provide access to drugs and vaccines, a model which Karsten Noko, a Zimbabwean lawyer working in the health and humanitarian sectors across sub-Saharan Africa, says is rooted in the continent’s colonial past and was put in place by design.

“Any place that isn’t able to produce its own medications and supplies is relegated to always carrying a begging bowl, but to understand the healthcare systems and funding models in African nations you have to examine the role of development institutions like the IMF and World Bank,” Noko said in a Zoom interview.

During the early days of independence, newly formed African states such as Tanzania, Ghana, Zimbabwe, and Mozambique were significantly improving healthcare outcomes for their citizens by prioritising public health investment. By the 1980s though, the International Monetary Fund (IMF) and the World Bank began implementing financing models which would fundamentally reshape economic policy across the continent.

Through their Structural Adjustment Programmes (SAPs), the IMF and World Bank handed out conditional loans to over 40 African nations, which required governments to implement financial reforms based on free-market strategies of growth. The net effect was that spending on social services like healthcare and education was gutted, while policies intended to liberalise trade, privatise industry, and encourage foreign investment were put in place.

Dr Eugene Richardson is an adviser to the African Centre for Disease Control, who has spent his career working as a physician in the Democratic Republic of Congo, South Africa and Sudan. He said SAPs could best be described as “neoliberal and extractive ideologies disguised as economic ‘science’.”

“SAPs eviscerated safety nets and public health infrastructures across the Global South,” Richardson said via email. “They privatised public assets, cut spending on healthcare, food and farm subsidies, and deregulated trade rules, such that illicit financial flows to the Global North currently dwarf what is sent to the Global South in ‘aid.’”

Richardson added: “The [IMF and World Bank] have abetted this continued postcolonial extraction of wealth, leaving countries that are rich in natural resources bereft and impoverished, which leads to situations where countries become dependent on foreign actors for services like healthcare.”

If the dependency is one side of the global health divide, supremacy is the other.

For over 100 years, the global health system has been governed by organisations and NGOs headquartered in wealthy Western nations that direct the global research agenda, make investment decisions, and are the gatekeepers of life-saving medicines and technology.

Catherine Kyobutungi is a leading Ugandan epidemiologist who serves as the Executive Director of the African Population and Health Research Centre, a think tank devoted to improving healthcare systems across the continent. She told VICE World News that as a global health practitioner, she continues to find herself “on the receiving end of such imbalances.”

“We are stuck in a system we can’t get out of which has Western roots, where we have no control over power and resources,” Kyobutungi said. “It’s the same system the entire world operates on, so how do you extricate yourself from that?”.

Professor Dicky Akanmori, WHO’s Regional Adviser for Vaccine Research and Regulation, agreed. “We’re attached to the same old funding mechanisms, whereby grants come into Africa from international agencies or foreign governments like the EU or Bill & Melinda Gates Foundation,” Akanmori said. “Funding from within is still woefully inadequate, and if you don’t bring the money, you don’t set the agenda, so our research is driven by the Global North.”

The net effect is that medical R&D occurs in high-income countries, creating products that, from their inception, are unaffordable in low-and middle-income countries. It then takes years of advocacy efforts, patent challenges, and the creation of global drug and vaccine alliances, to make these technologies available across the developing world. A case in point is the decades of activism it took to make antiretroviral HIV treatments affordable.

“It’s designed to create a benefactor and a beneficiary, so that one party always has the ability to manufacture and produce medications and diagnostics, and the other doesn’t,” Noko said. “You can almost call it a patronage system. It’s the ability to decide who gets what, when.”

“GAVI, the World Bank and the IMF shouldn’t be surprised by the COVID-19 vaccine inequity and lack of access we’re seeing, and if they are, they need to be much more aware of their own role,” he added.

In late 2020, an article went viral called “How (not) to write about Global Health.” Its author was Desmond Jumbam, a Cameroonian health policy consultant who uses satire to highlight structural inequalities embedded in the current system and gives talks to university students around the world on how to engage in responsible research practices when visiting countries in the Global South.

“We have researchers who come and study our people, who take specimens and then go study in the North to tell us about ourselves and our diseases,” he told VICE World News. “Global health is still practised in colonial ways, particularly through resource allocation. A student at Harvard or Johns Hopkins will have better access to research funding than an expert in Cameroon ever will. So it’s a self-perpetuating system where, because research capacity isn’t built on the continent, the expertise here isn’t acknowledged. We’re still not seen as partners, instead it’s quite exploitative,” Jumbam said.

Kyobutungi and Jumbam are part of an international movement to “decolonise global health,” which aims to dismantle age-old racially oppressive structures in medical research and development. Both agree that in order to achieve more medical autonomy, African governments must recognise the value of self-sufficiency, and prioritise investments in healthcare and research.

“We need to get our governments to see value in investing in African resources,” Kyobutungi said. “The missing link here is sustained engagement between the research community and those who hold the purse strings.”

“People in this movement say those in the Global North ‘need to be willing to give up power,’” Jumbam said. “People don’t just give up power, it goes back to the African independence movements in the 50s and 60s, the British and French didn’t just ‘give up power’, we had to demand it. It’s similar for the global health movement, we need leaders and intellectuals to rise up.”

The need for greater self-sufficiency in vaccine development has led to renewed calls for a manufacturing revolution.

In April, the African Union (AU) and Africa CDC held a virtual conference with member states on the need to expand vaccine manufacturing capabilities across the continent. By the end of the two-day event, AU governments had promised to increase the share of vaccines manufactured on the continent from less than 1 percent to 60 percent by 2040.

“If governments really commit to this, they’ll be putting a very important brick in the wall to prevent and deal with the next pandemic,” Patrick Tippoo, a founding member of the African Vaccine Manufacturing Initiative (AVMI), told VICE World News.

For decades, Africa has imported 99 percent of the continent’s vaccines, the bulk of which are distributed through UNICEF and procured through The Vaccine Alliance (GAVI), through its partnerships with international donors and pharmaceutical companies.

After GAVI arrived on the continent in the early 2000s, it created a business model for selling vaccines in Africa by partnering with international donors and pharmaceutical companies to buy vaccines at lower prices, assure a marketplace for sales, secure supply, and deal with issues of quality, pricing and fairness.

Over 40 African nations currently procure their vaccines through GAVI, but one of the adverse effects of the alliance is that it has stifled domestic investment into vaccine research, production and manufacturing.

With an eye on the future, scientists across the continent are now asking if it’s time for GAVI to rethink its mandate and open up the market.

“GAVI has done a great job, but it has also hampered development in recipient countries,” Professor Oyewale Tomori, an eminent Nigerian virologist and former GAVI board member told VICE World News. “The last question I asked at a GAVI meeting was ‘Is GAVI forever?’ And my reason for asking was that so many African governments – even when their economies are developed enough – revert to GAVI-assistance instead of taking care of their own people.”

This sentiment is shared by Tippoo. “There’s no debate over the remarkable role GAVI has played, but it hasn’t helped to encourage the kind of competition that would drive research and development on the continent. The evolving landscape requires introspection…. and now is the time for GAVI to reflect on a broader contribution it can make to incentivise and free up the markets in Africa,” he explained.

Happi, who is still looking for funding for his COVID-19 vaccine candidate, says the biggest missing piece of the puzzle is accountability and “political will” from governments.