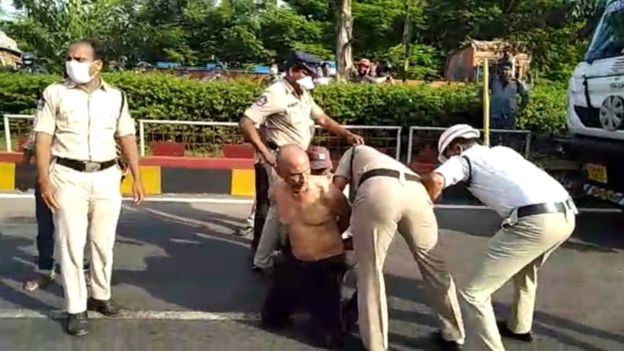 An Indian doctor who was suspended after raising concerns about a shortage of masks is again in the spotlight after officials committed him to a mental hospital. BBC Telugu’s V Shankar reports

Dr Sudhakar Rao, an anaesthetist with 20 years of experience, made national headlines over the weekend for the second time in two months.

A series of videos that went viral show him and police facing off on a highway in the southern city of Visakhapatnam, where Dr Rao lives and works. Authorities say he was sent to a mental hospital after.

The news follows reports of Indian doctors facing a backlash after speaking out about shortages of protective gear or lack of preparation in hospitals.

What happened to Dr Rao?

The videos, which have been shared widely on social media and WhatsApp, show a confusing chain of events from Saturday.

Dr Rao is first seen shirtless, sitting inside his car by the side of the road, and screaming at police.

In another video, he is lying on the road with his hands tied behind his back as a constable hits him with a baton. Police said the constable has been suspended, pending an inquiry.

In what is likely to be the last video, officers bundle the doctor into an auto rickshaw in front of bewildered onlookers.

But before he was taken away, Dr Rao spoke to local journalists, who had gathered by then to find out what was going on.

He said he had been stopped and forced out of the car by the policemen. “They snatched my phone and wallet. They hit me,” he alleged.

His detention has sparked huge controversy. Social media users and others criticised the state government’s handling of the situation. Opposition parties have weighed in, accusing the police of excessive force.

Dr Rao’s case is especially contentious because he was already under suspension.

Why was he suspended?

On 3 April, Dr Rao, who works at a government hospital, told media that doctors weren’t being given adequate protective gowns and masks.

He said he had just been asked to leave a meeting with officials where he had raised these concerns.

“We are told to use the same mask for 15 days before asking for a fresh mask. How can we treat patients risking our lives?” he asked local television reporters in a clip that soon went viral.

The government ordered an inquiry, but also suspended Dr Rao. By going public instead of filing a formal complaint, officials said, he had damaged the morale of other health care workers.

Days later, Dr Rao released a video in which he apologised and asked for his suspension to be cancelled. The government did not respond.

What does he say?

Dr Rao and his family allege that he has been harassed ever since speaking out about the lack of protective equipment in hospitals treating Covid-19 patients.

“People are threatening me over the phone for the past few days,” Dr Rao said on Saturday.

His mother, Kaveri Rao, told BBC Telugu he had no mental health issues.

“He is a reputed doctor,” she said. “But he has been facing abuse since the day he raised those concerns. I feel bad when people call me and ask about him. He has been very stressed for weeks.”

Police say they responded to a report of a drunken man behaving erratically on the highway. Visakhapatnam Police Commissioner RK Meena told BBC Telugu that officers didn’t know it was Dr Rao until they arrived at the scene.

Police say he tried to remove a barricade on the road and flung a liquor bottle onto the street. They also alleged that it was passers-by who restrained him by tying up his hands with rope before the police got there.

They registered a case accusing the doctor of obstructing police and causing damage.

However the identity of the complainant has not been released, and no eyewitness has so far backed the official account. The only video of Dr Rao being restrained shows a policeman tying his hands with help of a civilian.

“He behaved rudely with the police. He snatched the mobile phone from a constable and threw it away,” Mr Meena told reporters. “He is apparently suffering from psychological problems.”

He added that Dr Rao had first been taken to a police station, and later admitted to a hospital for a basic examination. Doctors there advised that he should be moved to a mental institution.

Dr Radha Rani, the hospital superintendent, told BBC Telugu that Dr Rao seemed stable, but would be under observation for two weeks so they can “ascertain his condition completely”.