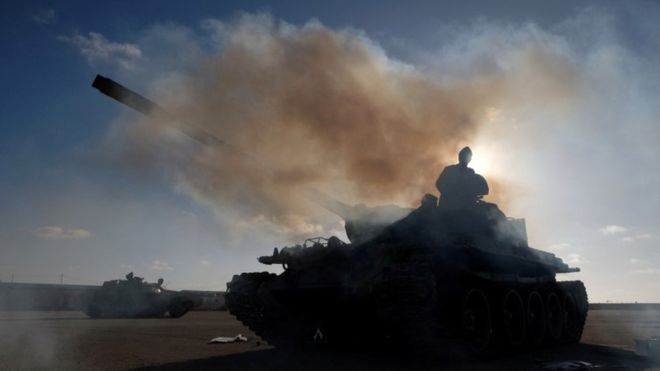 They have been supporting renegade general Khalifa Haftar’s battle against the Tripoli-based government, it says.

Since 2014, Libya has been split between areas controlled by the sides.

Wagner is believed to have been involved in conflicts in Ukraine, Syria and elsewhere. The Russian government denies any state involvement in the militant group.

What does the UN report say?

The report was compiled by independent monitors for the UN’s Libya sanctions committee. It has not been made public yet but it has been seen by news agencies.

It is the first time the UN has confirmed reports of Wagner’s involvement in Libya, putting the number of operatives at between 800 and 1,000.

The 57-page report says Wagner operatives have been in Libya since October 2018, “providing technical support for the repair of military vehicles and participating in combat operations”.

Its members have been acting as artillery and air observers, as well as “providing electronic countermeasures expertise and deploying as sniper teams”.

The personnel were mainly Russian, but there were also nationals of Belarus, Moldova, Serbia and Ukraine, the report said.

Early this year, Russian President Vladimir Putin said any nationals in Libya did not represent Moscow, nor were they paid by the state.

The UN report also says that Syrian mercenaries are fighting alongside Gen Haftar.

What’s the background to the Libyan conflict?

Libya has been wracked by war since the 2011 uprising which ousted long-time strongman Muammar Gaddafi.

There is an internationally recognised Government of National Accord based in the capital, Tripoli. It is supported by Qatar and Turkey. Pro-Turkish Syrians have been fighting for the GNA, which mainly controls areas in the nation’s north-west.

Ranged against it is the Libyan National Army (LNA), loyal to Gen Haftar, which is based in eastern Libya but controls many other areas. It is backed by Egypt, Russia and the UAE.

Gen Haftar launched an offensive against the capital in April 2019 but has been unable to take it.

A truce brokered by Turkey and Russia in January has been repeatedly violated.

What is known about Wagner?

It was reported to have been founded by Dmitry Utkin, believed to be a former member of a special forces brigade of Russian military intelligence, the GRU. Media have reported Dmitry Utkin’s call sign was Wagner, given to him due to his admiration of the Nazi regime, which appropriated the composer’s work to support its vision of Germany.

Wagner made its presence felt first in Russia’s military takeover of Ukraine’s Crimea peninsula in March 2014 and in the pro-Russian insurgency which erupted in Ukraine’s Donetsk and Luhansk regions the following month.

How the group is run and funded is open to speculation. Some media sources suggest the GRU secretly oversees it.

Analysts say that as the Russian government does not officially recognise the mercenaries’ existence, it can deny or play down any Russian casualties while maintaining a military presence.

Wagner has been reported as operating in a number of nations hit by conflict.

Wagner activities have also been reported in Madagascar and the Central African Republic (CAR). Three Russian journalists investigating Wagner’s involvement were shot dead in the CAR in 2018.

What’s the latest in the Libyan conflict?

The UN mission in Libya on Wednesday urged the two warring sides to resume talks on a lasting truce. They have been suspended since February.

Gen Haftar, whose forces have had setbacks in recent weeks, on Wednesday called for a unilateral ceasefire for the month of Ramadan, but the GNA rejected it, saying it needed international safeguards.

The battle for the capital has left hundreds dead, with more than 200,000 people displaced.

A GNA minister has also accused Gen Haftar’s forces, and Wagner in particular, of carrying out a chemical attack in the Salah al-Din area south of Tripoli.

Interior minister Fathi Bashaga said GNA forces were “exposed to nerve gas, paralysed and then sniped”. There has been no independent confirmation.

There have also been reports of a rift between Wagner and Gen Haftar over unpaid fees.