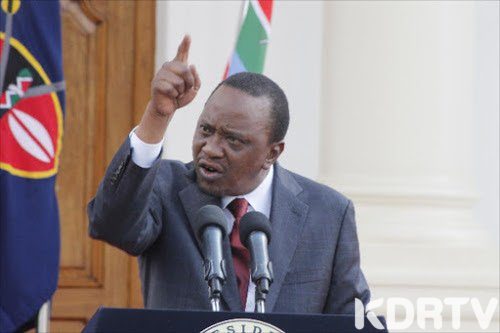 President Uhuru Kenyatta (pictured) has urged security forces not to relent in the fight against terrorism. The President addressed the press when he met security bosses in Mombasa. He praised security teams, saying they ought to remain vigilant.

Admitting that the worst security threat is terrorism, Uhuru applauded efforts by officers to thwart planned attacks. “Those who have faced Al Shabaab directly have done the nation proud.” Some of the ways he listed to mitigate the terror threat is to hold barazas to increase information flow, as well as sustain efforts.

The Commander-in-Chief further urged officers to arrest financiers and recruiters of al-Shabaab. He praised counties for setting up Counter-Terrorism Centres, which he said have improved the fight against militant groups.

The meeting comes in the backdrop of increased Al Shabaab attacks on Kenya. Three non-local teachers were Monday morning killed after suspected militants attacked a school in Garissa County. According to police, the gunmen attacked Kamuthe Resource Centre early Monday morning killing three male teachers. A 30-year old man was also hit and injured by a stray bullet during the attack. Female teachers and nurses at the institution were reportedly spared after being identified by the suspected militants.

The assailants also attacked and destroyed a Safaricom communication mast during the 2 am attack. They also attacked a police post in the area, witnesses and police said. Northeastern and the Coast regions have been cited as terror-prone areas. At the Coast on January 5, terrorists mounted a dawn attack on a military base used by both US and Kenyan forces in Lamu County, the Department of Defence (DoD) has confirmed. DoD spokesman Col. Paul Njuguna said they repulsed the Al-Shabaab insurgents who tried to take control of the base through the Manda airstrip, killing four terrorists. He added that the airstrip was safe after the 5.30 am attack.

But a confident Uhuru insists “Kenya will prevail”. He added that other than responding robustly, security officers will mount operations especially at the Coast and Northeastern. National government officers, the police and politicians will work together to deny terrorists’ entry and stop youth radicalisation. “Deny recruiters the space to operate and use the available resources to counter-terrorism.”