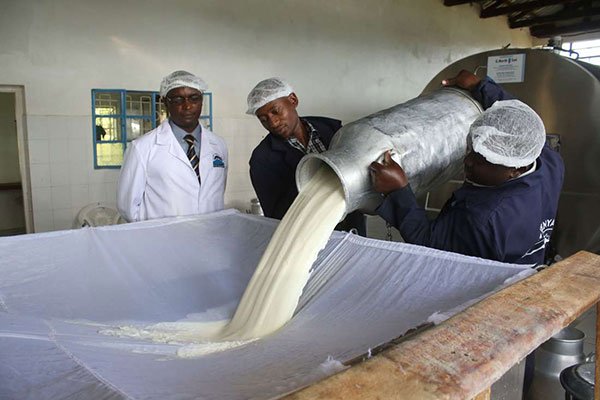 Constant trade wars among EAC partner states cast doubt over the future of integration not only in the EAC but Africa as a whole.

With about Shs1.7 trillion already lost in 12 months, manufacturers have one demand that if delivered, will be a Charismas gift like no other.

Currently, livelihoods of more than 100,000 farmers particularly in the dairy sub sector are hanging in the balance.

The same predicament is also taking an immeasurable toll on players engaging in sugar and poultry industry, with the farmers among those in the value chain bearing the biggest brunt.

Farm gate prices for milk in some cattle corridors have dropped by 90 per cent according to Uganda Manufacturers Association records while sugarcane, a primary raw material for sugar, is rotting away in the fields as some farmers and processors look on helplessly. The same story applies to poultry products and liquid petroleum gas canisters meant for export to Kenya.

This is happening because Uganda’s neighbour in the East—Kenya, has since blocked entry of locally manufactured products from accessing her market.

As a result, by the end of the year, just weeks away, Uganda’s economy would have cumulatively lost about $480 million (about Shs1.7 trillion) in 12 months, thanks to the non-tariff barrier that Kenya has been enforcing to curtail the country’s exports from entering the neighbouring country.

Uganda’s situation is not helped by the not so pleasant neighbour to the South— United Republic of Tanzania because of Tanzania’s never-ending tariff tinkering that breaches the EAC Common Market commitments.

As for the Rwanda situation, manufacturers for the third year running, have to deal with the shrinking market share which leaves UMA leadership wondering if the EAC still makes any sense especially to Uganda who has been the most compliant thus far in many ways.

According to UMA executive director, Mr Daniel Birungi, manufacturers are unhappy about Kenya’s decision to block Ugandan-made exports into their country for the last two years before intensifying it in the last 12 months.

Doubting the origin of Uganda’s products even those with valid certificates of origin, claims that Ugandan made products are counterfeit irrespective of the fact that such products bear the certified Q mark issued by Uganda National Bureau of Standards and arbitrary restrictions of Uganda originating goods, all defeats the essence of the EAC Common Market commitments.

In an attempt to continue having Uganda act as a supermarket for Kenyan-made products, the ‘dirty’ game according to UMA has been taken a notch higher.

“What we are seeing now is a structured and institutionalised harassment of Kenyan traders and dealers in Uganda dealing in our locally made goods. This is being done with a view to discourage dealing in Uganda originating goods, especially poultry, milk, sugar,” Mr Birungi told journalists last week in a news conference held at UMA headquarters at Lugogo in Kampala.

He continued: “All this is in addition to impromptu stop overs and rampant raids on Ugandan warehouses or warehouses with Ugandan goods, unnecessary issuance of quotas to Ugandan made sugar which contradicts the EAC Common Market Protocol and unending verifications whose findings always vindicate Uganda.”

It should be, however, noted that Kenya has always benefited from both access to cheap Ugandan raw materials and fresh produce for their agro – processing industry and market for finished products.

With time however, Uganda has developed capacity to manufacture and process goods that were originally being imported from Kenya from her own raw materials as well as imported inputs to survive and promote her economic independence.

This has been facilitated by the progressive initiative such as the Buy Uganda Build Uganda (BUBU) Policy and the Reservations and Preference Schemes under the PPDA Act.

As a result, there has been an increase in industries and growth of production efficiencies to feed both domestic consumption and export markets, particularly the regional one, considering that the EAC Common Market guarantees free movement of goods and services.

Despite persistent trade distortions orchestrated against Uganda, the country’s exports to Kenya had been increasing until 2017, when Uganda for the first time in decades, recorded a trade surplus with Kenya.

“Since then, Kenya has intensified Non-Tariff Barriers with fears of possible takeover of the trade balance of power yet such acts contradict the EAC Common Market commitments,” UMA statement reads in part.

In January 2020, the government issued a protest note regarding the unfair treatment the country’s products are being subjected. The reply to that has not been made yet up to today. Prior to that, there has been every effort at the level of Heads of States to resolve the trade issues between Kenya and Uganda, with minimal success since Kenya has breached commitments while Uganda continues complying with EAC requirements.

When interviewed for this article, Mr Africa Kiiza, a trade policy and negotiations analyst, noted that whereas it is important for regional Presidents to intervene to restore sanity, the lasting solution lies in empowering the EAC Secretariat. He is of the view that the EAC Secretariat should be given powers to sanction and punish where possible.

He argues that temporary bans although accepted by World Trade Organisation, at the regional level some countries used them selfishly and without proper justification.

Mr Kiiza who is also a researcher said there is need for an independent dispute settlement body at regional level to settle such conflicts instead of going to court. He cautioned against retaliation, saying Uganda cannot sustain it against Kenya at this particular point in history.

For Ms Faith Lumonye, a regional trade and investments expert, despite the EAC currently being the most integrated region in Africa, constant trade wars amongst the EAC partner states cast doubt over the future of integration not only in the EAC but Africa as a whole.

She said: “The government of Kenya has already showed it is fatigued by the EAC, giving numerous reasons including that the EAC is slow especially in decision making. Kenya is currently pursuing Free Trade Area with the UK and US. This is a message that should not be ignored by the rest of the member states.”

Trade and regional Integration analyst Martin Luther Munu said partner states must come to terms with the fact that once you enter an agreement, there will be winners and losers and therefore you cannot have everything.

According to Mr Munu, the solution lies in improving competitiveness rather than using underhand methods to gain advantage over others.

Ugandan manufacturers have pressed on in building their competitiveness. Now they expect their government to present them the best Christmas gift by way of calling Kenya to order or seeking redress at the East African Court of Justice.

Even with persistent trade distortions orchestrated against Uganda, the country’s exports to Kenya had been increasing until 2017, when Uganda for the first time in decades, recorded a trade surplus with Kenya.

“Since then, Kenya has intensified Non-Tariff Barriers with fears of possible takeover of the trade balance of power yet such acts contradict the EAC Common Market commitments,” UMA statement reads in part.