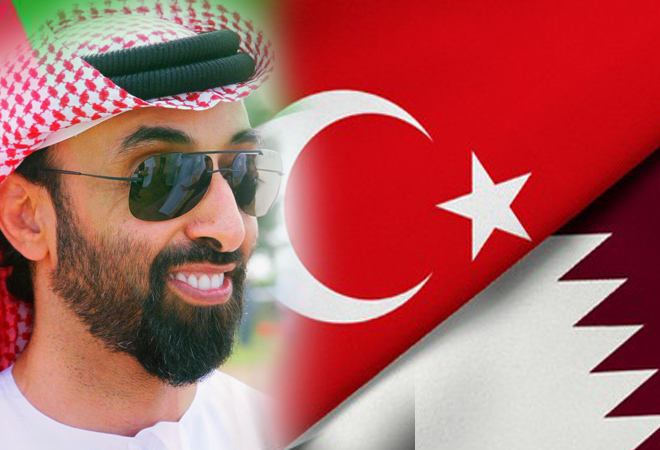 The geopolitical deck of cards in the Middle East is being shuffled once again. This time, it is UAE’s powerful National Security Advisor, Sheikh Tahnoun bin Zayed Al Nahyan, who is making the moves. After a breakthrough visit to Turkey on August 18, he was in Qatar on August 26 to mend fences. The two visits could be seen as part of a newly-crafted Emirati approach to reduce the points of friction in the region and turn the focus on economic development and prosperity, as the official narrative from Abu Dhabi goes. Or they could spell a belated recognition that the zero-sum game with Ankara and Doha had gone well past its best-by-date and a reset was overdue.

But first, a bit of perspective is in order.

Sheikh Tahnoun’s visit to Ankara was the first high-level contact between UAE and Turkey since April 2016 when Foreign Minister Çavuşoğlu visited Abu Dhabi in an unsuccessful attempt to build bridges. The two countries had found themselves on opposite sides of the ‘Arab Spring’, with Turkey (and Qatar) showing a marked preference for the rise of Islamist movements like the Muslim Brotherhood in Egypt. Mohammed Morsi, the Muslim Brotherhood leader candidate who was elected President of Egypt in 2012, became a lightning rod of sorts. Qatar provided close to US $ 8 billion to support his fledgling government while Turkey offered strong diplomatic and political support.

Sheikh Tahnoun’s visit to Ankara was the first high-level contact between UAE and Turkey since April 2016 when Foreign Minister Çavuşoğlu visited Abu Dhabi in an unsuccessful attempt to build bridges.

The UAE and Saudi Arabia, meanwhile, saw the holier-than-thou approach of the Brotherhood as an emerging threat that had to be nipped in the bud. They provided active support to Egypt’s powerful defense and security establishment, which had refused to come to terms with the fact that Brotherhood figures that had been incarcerated for years were now calling the shots. I was witness to the dramatic events in the first week of July 2013 when the army ‘responded’ to massive ‘spontaneous’ protests in Cairo and toppled Morsi. Turkey and Qatar bitterly blamed Abu Dhabi for the coup that brought Gen. Abdel Fattah al Sisi into power in Cairo. He became a close ally of the Emiratis and Saudis while Istanbul and Doha became a refuge for those Brotherhood leaders who could find a way to leave Egypt. Round 1 of the proxy battle had clearly gone to Abu Dhabi and Riyadh and the Emiratis could claim quiet satisfaction that they had turned back the incipient tide of political Islam.

Or so they thought. Qatar, however, had other cards up its sleeve and it found an often- willing partner in President Erdoğan’s ambition to restore some of Turkey’s lost pre-eminence in the Islamic world. The battlegrounds shifted from Iraq to Syria and from Egypt to Libya as Ankara and Doha often coordinated their moves to thwart the ambitions of Riyadh and Abu Dhabi. Qatar’s Al Jazeera TV was a particularly important force-multiplier in these battles, its widespread following on the Arab street making it a potent platform for disaffected voices. These included figures like Youssef al Qaradawi, the Doha-based Egyptian cleric and Muslim Brotherhood ideologue who continued to deliver rousing sermons on Al Jazeera’s Arabic channel.

The UAE and Saudi Arabia, meanwhile, saw the holier-than-thou approach of the Brotherhood as an emerging threat that had to be nipped in the bud.

The contradictions eventually became too large to be managed behind the largely illusory veil of Gulf unity and on 5 June 2017, I was among the diplomats invited to the foreign office in Abu Dhabi for a special briefing by then Minister of State Dr Anwar Gargash. We were told that UAE, along with Saudi Arabia, Bahrain and Egypt had decided to break diplomatic ties with Qatar and impose a set of economic and travel-related sanctions. The objective, as articulated at the time, was to discipline a recalcitrant regime that was wont to interfere in the affairs of its neighbours. A set of 13 hard-to-fulfill conditions were also subsequently outlined to make the point about specific grievances that Doha must address before it would be readmitted to the fold.

That plan to isolate Qatar didn’t work too well. Turkey offered military support to Doha, alternate supply lines came up to bypass Jebel Ali in Dubai and the stalemate was becoming a fact of life. Nobody was happy with it, least of all the Americans who wanted the Gulf to stand united against Iran. Several other factors were also at play and without going into all the gory details, let it suffice that these coalesced in the Al Ula summit in Saudi Arabia on 5 January 2021, which formally ended the dispute between the Quartet and Doha. Saudi Arabia and Egypt were the first off the mark, moving quickly to restore diplomatic ties and remove all sanctions. The rift with UAE would take longer to heal.

And that’s where the visits of Sheikh Tahnoun to Ankara and Doha are so significant. For the best part of the last decade, Turkey and Qatar preferred to throw their weight behind ‘Islamist’ forces while Abu Dhabi stood behind the (only relatively) more secular proxies like Gen. Khalifa Haftar in Libya. There were no winners, though some treasuries definitely emerged somewhat poorer from the conflict. A decline in oil prices and the debilitating economic impact of the COVID-19 pandemic on the region became catalysts for a review of the status quo. With UAE getting ready to host the postponed Dubai Expo 2020 and Qatar preparing for FIFA 2022, the rationale for burying the hatchet was increasingly evident.

The battlegrounds shifted from Iraq to Syria and from Egypt to Libya as Ankara and Doha often coordinated their moves to thwart the ambitions of Riyadh and Abu Dhabi.

No surprise, then, that the message coming out of the two visits is a focus on investment, economic development and prosperity. Gargash called Sheikh Tahnoun’s meeting with President Erdoğan ‘historic and positive’ while Erdoğan told the press that he had discussed specific areas where UAE could invest in Turkey. That should go down well in a country whose political ambition has stayed far ahead of its economic capacity during the last few years. About the meeting with Sheikh Tamim in Doha, he tweeted that the visit was about “building bridges of co-operation and prosperity with siblings and friends“. He said the meeting was an example of a “key pillar of Emirati policy” and that they were “turning the page of disagreement and looking to a positive future.” It is likely that the two sides will restore full diplomatic ties soon.

So that’s that? Or is it the tip of the iceberg? The Biden administration’s determination to pull out of Afghanistan by August 31 is, perhaps, the elephant in the room. Having provided a base to several Taliban leaders and hosted the talks between the US and Mullah Baradar and his compatriots, the Qataris feel they have a strong hand. Turkey, which also has close ties with Pakistan, believes that it can wield a degree of influence in a Taliban-ruled Afghanistan even though its offer to take charge of security at Kabul airport was unceremoniously turned down. But the Turkey-Qatar axis, working in tandem with Pakistan, could turn out to be an important point of connection with the new Taliban regime.

Having provided a base to several Taliban leaders and hosted the talks between the US and Mullah Baradar and his compatriots, the Qataris feel they have a strong hand.

Sheikh Tahnoun, known for his pragmatic approach, would be aware of this emerging reality. He also wouldn’t have forgotten that the UAE ambassador to Kabul and five other diplomats from his mission were killed in an explosion at the governor’s guest house in Kandahar in January 2017. The Emirati diplomats were in Kandahar to review a humanitarian Red Crescent project that they were funding. The Taliban denied responsibility for the attack, but it was widely believed to have been carried out by a Pakistan-based outfit. Sometime, somewhere, those scores would be settled.

Former Afghanistan President Ashraf Ghani, meanwhile, has positioned himself in UAE where he and his family are being hosted on humanitarian grounds. Normalisation of ties between UAE, Turkey and Qatar, thus, has the potential to create a new dynamic in the region.

Adopted from the original source-ORF

Reimagining A More Resilient UN System With Taiwan In It