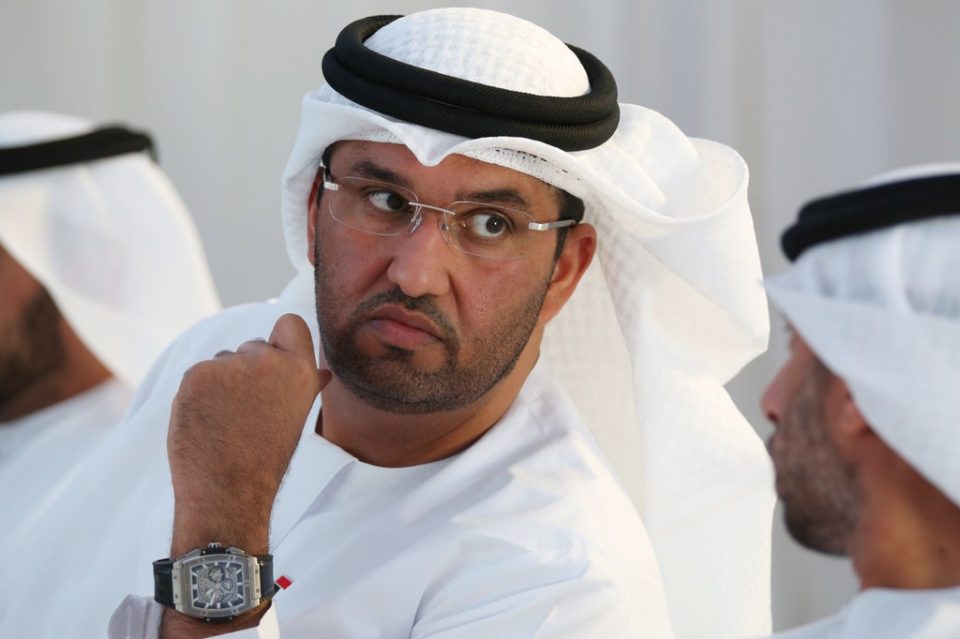 Suhail al-Mazrouei says “unless someone is willing to come and bring 10 million barrels of oil a day, no one can replace Russia.”

The United Arab Emirates’ energy minister doubled down Monday on an oil alliance with Russia that’s helped buoy crude prices to their highest in years as Moscow’s war on Ukraine rattles markets and sends energy and commodity prices soaring.

The minister said Russia, with its 10 million barrels of oil a day, is an important member of the global OPEC+ energy alliance.

“And leaving the politics aside, that volume is needed today,” Suhail al-Mazrouei said. “Unless someone is willing to come and bring 10 million barrels, we don’t see that someone can substitute Russia.”

Led by Saudi Arabia and Russia, the alliance has the capacity to increase oil output and bring down crude prices that have soared past $100 a barrel.

The United States, European nations, Japan and others have been calling on Gulf Arab oil producers to do more to help bring down prices. Britain’s Prime Minister Boris Johnson paid an in-person visit this month to the UAE and Saudi Arabia, where he raised the issue.

Al-Mazrouei described the OPEC+ alliance as one that is here to stay and shot down any suggestion that the UAE would strike out on its own and increase production unilaterally.

“Staying together, staying focused, and not allowing politics to kick in to this organization … we always believe that whatever we do as countries when it comes to production and to this work, it needs always to stay out of politics,” al-Mazrouei added.

The OPEC+ alliance has stuck with their plan for gradual oil production increases based on a deal struck during the height of the coronavirus pandemic lockdowns when producers made deep cuts to output to make up for plummeting demand for fuel. Higher oil prices have been good for oil producing economies. Despite efforts at diversification, Gulf Arab states continue to rely heavily on energy exports to fuel their economies.

Al-Mazrouei also used his speech at the Atlantic Council’s Global Energy Forum in Dubai to press for greater investment in oil and gas, even as his country moves toward cutting emissions within the UAE’s borders and commits to its pledge of net-zero by 2050.

In apparent criticism of some NATO member policies, the minister said Russia’s war in Ukraine – which he described as a crisis – needs diplomacy to be resolved and “not by pouring more weapons into the situation because basically the people are going to be the victim.”

The UAE has been hedging its policies and statements since the start of the invasion, with the country’s foreign minister even traveling to Moscow earlier this month and discussing ways to boost ties.

Prices have also risen as Saudi Arabia, OPEC’s largest oil producer, faces continued cross-border attacks by neighboring Yemen’s Houthi rebels who have used drones and missiles to target the kingdom’s oil facilities. Saudi Arabia has said it will not bear any responsibility for any shortage in oil supplies due to the attacks.

Despite US condemnation of the Houthis and US-supplied anti-missile systems for Saudi Arabia, relations between the Biden administration and Crown Prince Mohammed bin Salman remain tense and there has been no direct call between the two since the US president took office.

The US State Department’s senior advisor for global energy security, Amos Hochstein, has been on multiple recent trips to Saudi Arabia to discuss energy issues. He said higher oil prices are helping Russia recoup some of its losses from US-imposed sanctions and stressed the need for diminishing Europe’s dependence on Russian energy supplies, particularly natural gas.

When asked about the Biden administration’s commitment to Gulf Arab allies, he said it remains “rock solid” while cautioning this “doesn’t mean that we always agree.”

“We are committed. At no attack will we ever say ‘this is your problem and not ours’,” he added.

He declined to publicly call on the OPEC+ alliance to pump more oil, saying he did not have a specific message for the group ahead of the coming meeting Thursday.

“I think that everybody at OPEC is well familiar with the market and knows the shortages we are living through right now,” he said in virtual remarks. He was initially scheduled to attend in person.

Al-Mazrouei, meanwhile, gave no indication that OPEC producers plan to change course but noted that “we are in an environment where everyone is saying raise your production.”

“We definitely at this time need all available resources,” he added, slamming efforts to pull back from investments in oil and gas.

What Exactly Are Frankincense And Myrrh?