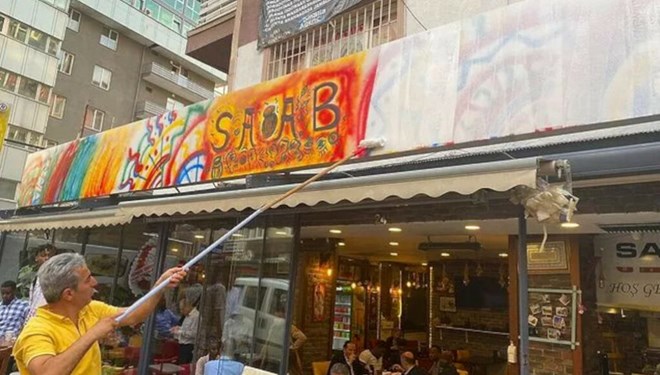 The restaurant, Saab, had been targeted before, with the police ordering them to take down the sign because it included a non-Turkish word.

The new sign had traditional African patterns painted on it, which the police said included “terrorist colours”. The sign was then painted white.

Parts of the multi-coloured sign had the colours red, green and yellow next to each other. The three colours are used extensively in both various African cultures, and among Turkey’s Kurdish population, who often face accusations of terrorism over similar issues.

“Is it a crime to put up a sign? Is it a crime to work legally in Turkey?” one of the owners of the restaurant, a Somali woman who holds Turkish citizenship, said in protest.

Mustafa Yeneroğlu, Democracy and Progress Party (DEVA) deputy and a migrant rights advocate, was present to support the restaurant owners, telling the officers to stop complying with unlawful orders.

“Those who gave these orders must be dismissed from duty. We must stand against othering people for their ethnicity or skin colour. Let us not allow racism. Let us leave this understanding that takes away all of our humanity,” Yeneroğlu said.

Those who harassed the restauranteurs for months on end “do not want to see black-skinned people in Kızılay”, Yeneroğlu said in a later tweet. “This is banditry. A summary of the country.”

Media, Propaganda and the Politics of Intervention