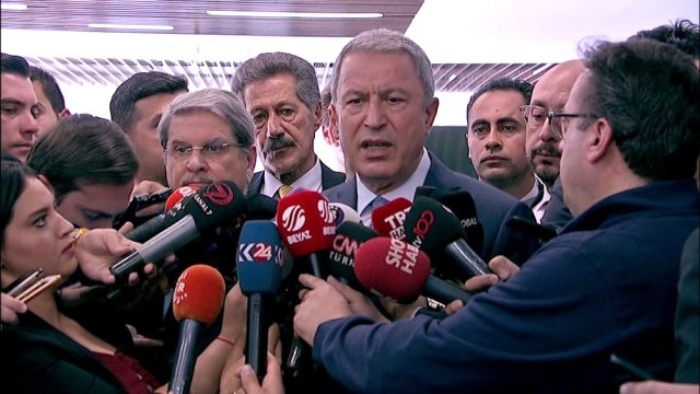 Turkish President Recep Tayyip Erdogan, while dominating regional headlines with threats of an “imminent” full-scale operation in Syria’s Idlib province, will be constrained not only by Russia, but by political rivals at home.

“It did not have to be this way; those children might not have died,” said an angered Engin Altay, the deputy head of the nationalist CHP, speaking Wednesday in reaction to the recent deaths of 12 Turkish soldiers in Idlib, and the subsequent bolstering of its military positions there.

Altay’s comments drew applause from CHP colleagues, whose 139 seats are second only to Erdogan’s ruling AKP, as well as the nationalist Iyi party.

The Islamist AKP, which for years backed the anti-government rebellion in Syria, has seen its electoral popularity drop in the past year-plus amid economic turmoil. It has lost control of the capital Ankara, the largest city after Istanbul, and was knocked down to below 50% representation in parliament.

“We could not even reach our martyrs by helicopter,” Altay said, emphasizing a lack of protection afforded by the Russian-led Astana Process and the 2018 Sochi agreement, as well as the clear lack of security afforded by supposed partners on the ground.

The CHP earlier this month called for a reevaluation of the Sochi agreement, meant to preserve Idlib as a demilitarized zone and disarm radical factions that dominate the province.

“[The agreement] promised to remove radicals from the modest opposition. Is this even possible?” Altay asked parliament on Wednesday, answering his rhetorical question: “There is no way to distinguish these from each other.”

“Turkey said it would disassociate moderate elements from the radicals, but it couldn’t do it,” party chair Ahmet Kamil Erozan was quoted by the pan-Middle East website Al-Monitor as saying.

“It promised to clean out and open M4 and M5 highways, but it couldn’t open them,” he said, referring to the key trade routes Syrian forces are fighting to open.

The CHP has further called for a new engagement with Syrian President Bashar al-Assad’s government.

“The government must quit its policy based on regime change in Syria. It should abandon all its cooperation with groups that threaten the territorial integrity of Syria,” the CHP said in a policy paper.

Altay called Turkish support for the former Al-Qaeda affiliate Hayat Tahrir al-Sham, which controls most of Idlib, a “diplomatic scandal.”

The 61 lawmakers of the liberal HDP, alone in their opposition to last year’s operation against Kurdish forces in Syria, have now found themselves in the company of some of the country’s most nationalist blocs in opposing any further foray into Idlib.

“To date, Erdogan has listened to the opposition very little,” notes Sibel Hürtaş, a journalist with Al-Monitor.

“The critical thing here is the news of martyred soldiers. How will the government explain this to the public? Unless the opposition supports Idlib, the anger over new martyrs will turn directly against Erdogan.”

The critical common point between Erdogan and his rivals is an overarching hostility to any new influx of displaced people into Turkey, a scenario the European Union is also keen to avoid.

The United Nations estimates that hundreds of thousands of Idlib residents fled their homes in the past week alone toward the relative safety of the Turkish border, raising the prospect of a fresh crush of desperate civilians seeking entry.

The world body said Thursday that 170,000 displaced Syrians are currently sleeping out in the open, in cold winter conditions.

“I am … appealing for neighboring countries, including Turkey, to broaden admissions, so that those most in danger can reach safety,” UNHCR chief Filippo Grandi said in a statement.

With the Turkish population having reached its breaking point with Syrian refugees, Erdogan’s government has sought to halt a bleed in electoral support by blocking any new influx, whether civilians or militants.

“An operation in Idlib is imminent,” Erdogan told parliament Wednesday. “We are counting down, we are making our final warnings.”

The Turkish leader proposed an off-ramp for deescalation, demanding Syrian forces retreat behind previous lines of engagement by the end of the month.

But the Syrians, electrified by the full retaking of Aleppo province last week, and the landing of the first civilian plane at Aleppo airport in nearly a decade, have showed scant sign they are willing to halt this momentum.

A key decider will be Moscow, which has backed the Syrian advances with air power and which has made preservation of state sovereignty a hallmark of its international positions; as will the issue of Turkish military casualties, a highly sensitive point for a public frustrated with the past decade’s AKP intervention in Syria.

Erdogan had hoped that the Russian-brokered observation points dotted through Idlib would preserve the heavily populated province as a safe zone, and shield Turkey from further spillover from the war.

Russia, however, is sympathetic to the desire of Damascus take back its territory, and for a diplomatic solution on displaced persons.

Idlib, now an opposition purgatory, will likely be slowly chipped away in the months and maybe years to come, with the last holdouts of the Syrian opposition diluted between border enclaves, desperate escapes, and a return to life under Assad.