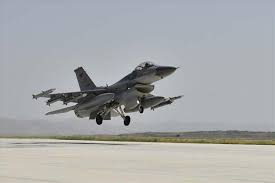 Eight frigates and corvettes participated, along with 17 planes that flew from Eskisehir, central Turkey on a 2,000-km (1,250-mile) round trip. (File)
AFP

ANKARA: Turkey’s military conducted an air and naval exercise in the eastern Mediterranean, its defense ministry said Friday, in an apparent show of force linked to the Libyan conflict.
The drill, which lasted for eight hours Thursday, was dubbed an “Open Sea Training” exercise by the ministry in a statement that did not mention Libya directly.
Eight frigates and corvettes participated, along with 17 planes that flew from Eskisehir, central Turkey on a 2,000-km (1,250-mile) round trip, it said.
The private NTV broadcaster said the exercise was held in Libyan waters but did not offer any explanation.
The defense ministry reported that the exercise was “conducted successfully,” sharing photographs and videos of the F-16 fighter jets and warships in action.
Turkish state news agency Anadolu dubbed the drill a “show of force.”
The exercise came as tensions grow in the eastern Mediterranean owing to the conflict in Libya, and a dispute with Cyprus and Greece over offshore hydrocarbon resources.
Turkey has already sent ships to search for oil and gas off the divided island of Cyprus.
Turkey backs the UN-recognized Libyan Government of National Accord (GNA) in Tripoli, which has been under attack by military strongman Khalifa Haftar since April 2019.
Haftar is supported by Egypt and the United Arab Emirates, with whom Turkey’s relations are strained, as well as by Russia.
Momentum in the conflict changed after Ankara sent Syrian fighters, drones and military advisers to Libya after signing maritime and security agreements with Tripoli.
GNA forces have in recent weeks recaptured outposts in western Libya that had been seized by pro-Haftar loyalists, who then tried to march on the capital.
On Wednesday, a Turkish warship prevented a new EU naval mission enforcing the Libya arms embargo from checking a suspect freighter off the war-torn country’s coast.
Turkish pro-government daily Yeni Safak reported Friday that Ankara could set up two bases in Libya, one southwest of Tripoli at Al-Watiya that would host drones and the other in the port city of Misrata.

The fall of the American counterrevolution