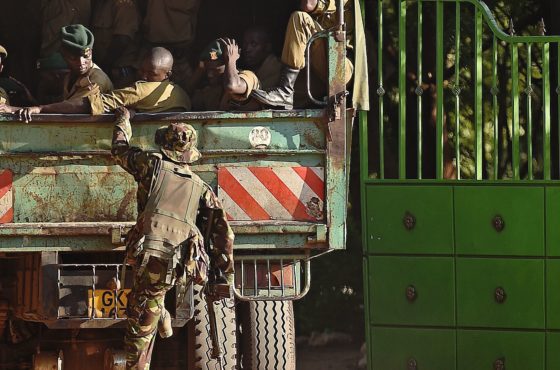 The Daily Maverick, a South African online newspaper, recently published a two-part series by Declassified UK, an online investigative media outlet, on the roles of the U.S. and U.K. intelligence services in Kenya’s ongoing and highly abusive counterterrorism campaign. While some of the allegations go beyond those documented by human rights organizations in recent years, the cases highlight an underlying problem – the dangerous lack of transparency in foreign support for Kenya’s counterterrorism drive.

Kenya has for years faced criticism by rights groups and some partner countries for its abusive counterterrorism campaign, a response to numerous terrorist attacks, some of them going back many years. Since the 1998 bomb attack by al-Qaeda on the U.S. embassies in Nairobi and in neighboring Tanzania’s city of Dar es Salaam, and the 2002 missile attack on an Israeli-owned hotel in Mombasa — also suspected to be by al-Qaeda — Kenya’s role has grown steadily as a strategic partner for the United States and other western countries in countering terrorism in the east and horn of Africa.

The emergence of al-Shabaab, an armed Islamist group based in neighboring Somalia that has carried out a series of deadly attacks and kidnappings of tourists in Kenya over the past decade, has cemented Kenya’s regional importance in this effort. The al-Shabaab strikes include the one on the Westgate shopping mall in Nairobi in September 2013, in which at least 68 people were killed. This was followed by a series of gun and grenade attacks in Mpeketoni, in Lamu County, in June 2014, in which 87 died, and an attack on Garissa University in April 2015, in which 148 were killed.

Last January, al-Shabaab attacked a military base housing U.S. troops at Manda Bay in Kenya’s coastal town of Lamu, killing three American security officers. In the aftermath, the U.S. military is seeking authority to conduct drone strikes, with Kenya’s consent, against suspected al-Shabaab militants in certain areas of Kenya if needed in the future, according to the New York Times.

Kenya’s own response to these and other assaults has been marred by serious abuses, including torture, extrajudicial killings, and enforced disappearances. These abuses have been well-documented by human rights organizations, and in some instances by government institutions. But Kenyan authorities have done little to either investigate them or to ensure that those responsible are held to account. And Kenya’s international partners, including the United States and the United Kingdom, have not pressed Kenya enough to investigate these violations.

The Daily Maverick/Declassified UK series alleges the U.S. and U.K. secret services are themselves at the heart of these abusive operations. If true, that would compromise these countries’ ability to press for accountability for security force abuses in Kenya. The series alleges the U.S. Central Intelligence Agency (CIA) is not only financing a special counterterrorism unit called the Rapid Response Team (RRT), but has also been behind the establishment, training, and arming of the force. The RRT is composed of about 60 officers drawn from Kenya’s paramilitary police unit, the General Service Unit (GSU).

The series says the CIA and Britain’s MI6, in some instances supported by Israeli Mossad, have been making some of the counterterrorism decisions in Kenya. The articles cited interviews with unidentified former U.S. government officials, including in intelligence, as well as unnamed Kenyan police officers and families of victims. The news outlets say the evidence indicates the RRT is responsible for some of the highest-profile and most controversial killings of terrorism suspects. The Kenyan, U.S., and U.K. governments did not officially respond to Declassified UK’s questions.

But Kenyan and international human rights organizations that have documented these operations in the past have found that they are more complex and involve more Kenyan security units than the Daily Maverick and Declassified UK suggest.

In 2016, for instance, Human Rights Watch documented at least 11 deaths and 34 cases of enforced disappearances of people suspected of links to terrorism groups. At that time, we found that the operations were often carried out by a team of officers from multiple units, including the Anti-Terrorism Police Unit (ATPU), the GSU, administration police, the National Intelligence Service (NIS), and military intelligence. It is likely that the high-profile killings of at least three Muslim clerics in Mombasa between 2012 and 2014 might have been carried out by a more highly trained unit.

The cases we investigated at the time included those of Abdiwelli Ibrahim Sheikh and Faisal Mohamed Ibrahim, who have been missing since they were arrested in March 2015 at their houses in Mandera town, near Kenya’s borders with Somalia and Ethiopia, and taken to Mandera military camp. We found that some of those who arrested them were driving an armored military vehicle. In another case, the whereabouts of Omar Yusuf Mohamed have remained unknown since April 2015, when he was arrested at a restaurant by several security officers in civilian clothing. But witnesses said they recognized three as well-known officers from the Criminal Investigations Department (CID) and the ATPU.

Western Funding – and What Else?

In its research a few years ago, Human Rights Watch had found that the U.S., the U.K., and the European Union were funding Kenya’s counterterrorism campaign, but the extent of their involvement in the actual operations has not been clear. In a case more than a decade ago, a team of security officers arrested terror suspects in Kenya and Somalia and took them to the United States. Victims of that operation told Human Rights Watch in 2008 that among those who interrogated them after arrests in Kenya and Somalia were U.S., U.K., and Israeli intelligence officers.

There has been little recent evidence to suggest that these countries have been more involved beyond providing technical and financial support. But given the questions raised in the Declassified UK investigation, it is imperative and urgent for all three countries to clarify their roles.

Human Rights Watch documented these killings and called out donors for supporting the ATPU and abusive units and failing to take meaningful action to stop their abuses. The allegations by the Daily Maverick/Declassified UK series don’t change that, but they bring renewed urgency to the call. And if true, the cases further spotlight the doublespeak by the United States and the United Kingdom on accountability for security force abuses in Kenya. These governments and their lawmakers should investigate the claims, be more transparent about the nature of their support, and ensure they are not aiding and abetting unlawful killings and other abuses.