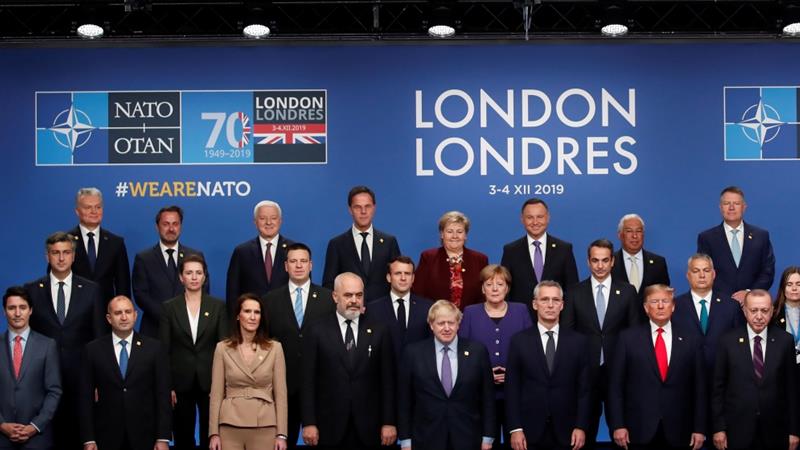 NATO leaders tried to overcome the birthday blues and put on a united front as a meeting near London got under way, following a day of drama that revealed deep wounds within the military alliance.

As he opened the summit on Wednesday celebrating the alliance’s 70th birthday in Watford alongside host UK Prime Minister Boris Johnson, NATO Secretary General Jens Stoltenberg said: ‘Whatever our differences, we will continue to unite to defend each other, all for one and one for all.”

Johnson said: “We are rock solid in our commitment to NATO … History shows that peace cannot be taken for granted and even as we celebrate this anniversary we must ensure our deeds match our words.

“We must never shy away from discussing new realities, particularly NATO’s response to emerging threats like hybrid warfare and disruptive technologies including space and cyber.”

On Tuesday, US President Trump and his French counterpart Emmanuel Macron clashed over the role and future of NATO.

Trump tore into Macron during a 52-minute press conference, rallying against European tax policies and criticising the French leader’s remark that NATO was “brain dead”.

Macron stood by his comment and, referring to Turkey, said members disagreed over the definition of terrorism with relation to the YPG militia.

The French president first made his assessment of NATO in a November 7 interview with The Economist, as he criticised a lack of coordination between members of the alliance over Turkey’s recent operation in Syria.

Several other NATO members also disagreed with Turkey’s operation, with some suspending arms sales to Ankara.

One of Macron’s chief complaints was that Turkey, a NATO member since 1952 and a critical ally in the Middle East, has increasingly acted in a freelance way, carrying out incursions into Syria, taking up arms against the Kurdish YPG militia who had been allied with Western forces against ISIL, and buying the S-400 missile defence system from Russia.

Erdogan has pushed back, saying he will oppose NATO’s plan for the defence of Baltic countries if the alliance does not recognise groups that Turkey deems terrorists, including the YPG.

The London meeting, which comes little more than a week before the UK holds a general election on December 12, will conclude late afternoon on Wednesday.

Following Trump’s lengthy press conference a day earlier, which other NATO leaders have appeared to mock, some are expecting further extensive discussions when the meeting ends.

Al Jazeera’s James Bays, reporting from Watford, said: “They can’t agree on the future role of NATO 70 years after the alliance was born, it is certainly facing serious difficulties.”

At a previous meeting, 18 months ago in Brussels, Trump claimed the US was overpaying for defence as he called other allies to boost their contributions.

“That’s dispute number one, Donald Trump against the others,” said Bays.

Later on Wednesday, Trump is expected to host an exclusive lunch for NATO members who spend at least 2 percent of their GDP on defence.

Nine allies should meet the two percent guideline in 2019, an increase from three allies a few years ago. The UK currently allocates 2.1 percent of its GDP.