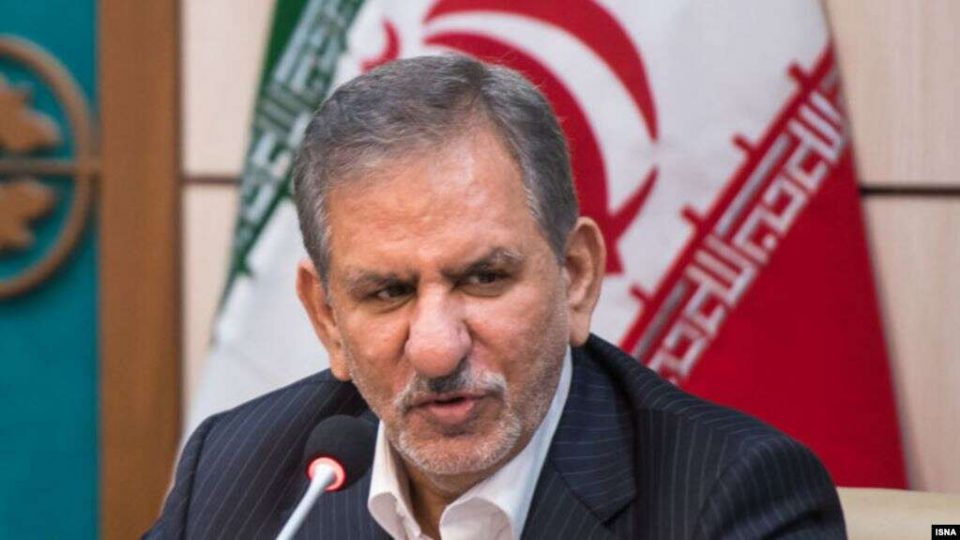 n a series of remarks rarely heard from Iran’s political elites, First Vice President Eshaq Jahangiri lamented Washington’s onerous sanctions and how they are tightening the noose around Iran’s economy. “The Americans have in the true sense blocked the key bottlenecks of our country’s economy,” Jahangiri told an exports conference in Tehran Dec. 2.

“Even allies fear buying Iranian oil” due to US pressure, he said, which has forced Iran to get its crude shipped out through unconventional ways. The Reformist politician, however, took pride in the fact that despite all the roads closed off, Iran has managed “to stand on its own feet.”

After withdrawing last May from the multilateral Iran nuclear deal known as the Joint Comprehensive Plan of Action (JCPOA), the administration of US President Donald Trump has been squeezing the Iranian economy through an unabated “maximum pressure” campaign, which seeks to shut off Iranian oil exports and push Tehran into renegotiating the “bad” deal.

Unsurprisingly, Jahangiri’s comments did not go unanswered by political rivals at home. Hard-liners took aim at the vice president for projecting a “bleak” image from Iran and giving Washington the green light to press ahead with further sanctions.

As Jahangiri was painting a picture of “the worst conditions” Iranians have been facing since the 1979 Islamic Revolution, other authorities were busy exhausting diplomatic channels to ease the economic and political pressure. Oman’s Foreign Minister Yusuf bin Alawi was in Tehran discussing with several Iranian officials “regional stability,” including the Hormuz Peace Initiative, a plan unveiled by President Hassan Rouhani during his address to the UN General Assembly in September.

Alawi’s trip to Tehran, his third in the past nine months, came only one week after he met with US Secretary of State Mike Pompeo in Washington. The veteran Omani diplomat has been actively engaged in what is seen as mediation efforts to resolve the US-Iran difference over the JCPOA and bridge the wider gaps between the two archenemies.

Nonetheless, Iran’s hard-liners downplayed the visit as just one of several last-minute efforts to revive the fragile nuclear deal. Javan, an outlet affiliated with the powerful Islamic Revolutionary Guard Corps, described the JCPOA as a vehicle that has “run out of gas.”

Iran’s ongoing diplomacy with the JCPOA’s remaining European signatories has failed to draw concrete measures on their part toward the economic relief Tehran is hoping to gain from the accord. In its latest reaction, Iran’s Foreign Ministry warned that if talks with the Europeans continue to bear no fruit, Tehran will commit further breaches, a phased process that has passed four stages since May.

After meeting with his Omani counterpart, Iran’s Foreign Minister Mohammad Javad Zarif took to Twitter for a fresh attack on the Europeans, whom he accused of offering “hollow promises” and failing “Iranian kids” by denying them the necessary medicine to “cover their wounds.”

The Iranian top diplomat’s tweet was his first after an unusual three-week-long silence on the social media platform he had been actively using for public diplomacy, and only days after deadly unrest gripped Iranian streets following a government-imposed hike in gasoline prices. In the absence of an official investigation and after internet connectivity was restored following a countrywide blackout, details are now dribbling out from anonymous witnesses. According to an updated Amnesty International report, at least 208 people, among them teenagers, died in the unprecedented crackdown.

Against such a backdrop, Zarif’s concern for “Iranian kids” drew an outburst of furious comments from hundreds of Iranian users, who uploaded below his post footage of scuffles between rock-throwing protesters and armed officers as well as photos of bleeding young men believed to have been shot — some in close range — by security forces.

“Last time ‘I checked,’ it was your regime killing the innocent Iranians on the streets,” one user tweeted back at Zarif, borrowing from the Iranian foreign minister’s characteristic sarcasm.